In an industry dominated by men, it can be an intimidating feat for a woman to step into the service trades.  However, I know from first-hand experience that women are out there who not only desire this career path but excel at it. And we need more of them.

In 2012, I appeared on the “Undercover Boss” television show and had the opportunity to work alongside a female service professional who symbolized the huge untapped pool of talent that existed for our franchise owners’ current and future workforce needs. What I experienced on the front lines across our service brands in front of millions of TV viewers forever changed my perspective about the opportunities that exist for women in the service trades.

Research and statistics confirm that women have been steadily rising in the ranks of franchise operators over the past couple of decades. In an article written by Entrepreneur, between 2011 and 2017, woman business ownership increased by 83%. This is music to my ears!

Breaking the Mold in Restoration

Supporting Women in the Trades

Six years ago, we started the Women in the Trades (WITT) scholarship program at Dwyer Group to further those opportunities. We also launched a catalog of uniforms specifically tailored to women service professionals across our Dwyer brands. This program was created to educate and promote the hiring of women for traditionally male-dominated roles in the service trades. Since launching in 2012, the WITT program has awarded nearly $50,000 in scholarships to women working towards a career in the trades, students studying for a trade career or female front-line employees at franchise locations for any of Dwyer Group’s service brands.

Today, the WITT initiative is one of the most recognizable efforts to educate and promote the hiring of women for traditionally male-dominated roles. My goal is to expand this program every year, award more scholarships to women who are drawn to the service trades, and communicate to women across the country and around the world about the incredible career paths that exist for them not only at Dwyer Group, but also in the trades industry at-large.

Just ask Mary Palermo, Rainbow International franchisee in Asheville, North Carolina. Mary remembers first hearing about Rainbow International on Super Bowl Sunday, four years ago. Upon hearing about Rainbow, Mary and her husband learned about Dwyer Group’s Code of Values, Live R.I.C.H (following the themes of Respect, Integrity, Customer Focus and Having Fun in the Process) and knew that Rainbow was exactly where they were meant to be. They visited Dwyer Group headquarters in Waco, TX in March of 2014, signed contracts, and shortly after opened their doors in April. 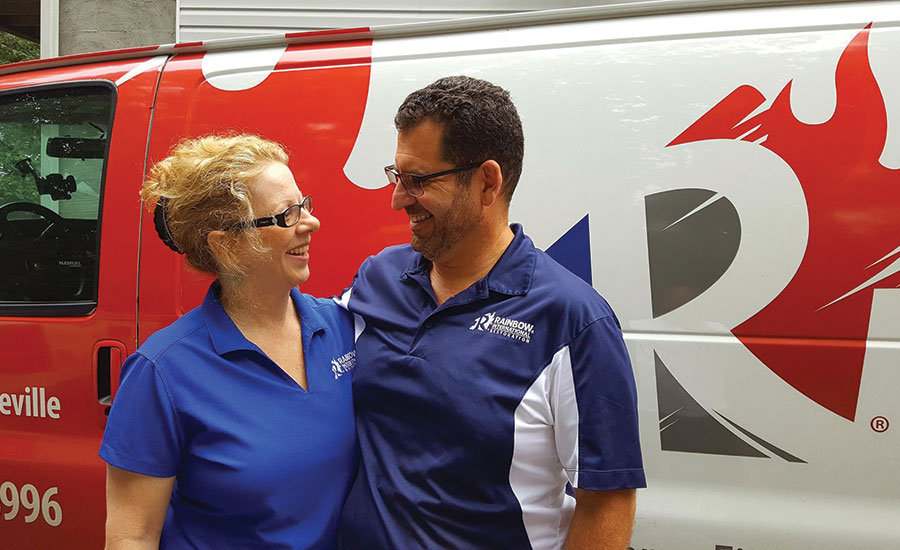 Mary often uses the quote, “Women are from Mars, men are from Venus,” when describing her business. She attributes a lot of her success to her husband and his expertise in the restoration business, but also to the confidence she has grown and her ability to look at situations in a different light.

In 2017, Mary was named Rainbow International’s “Woman of the Year,” for continuously setting an outstanding example for other franchisees. The Woman of the Year award is presented to a woman who has continuously encouraged her co-workers to thrive in the restoration industry. Her confidence in leading her business as well as being a voice in the community is inspiring to women (and men) throughout the Rainbow family as well as the restoration industry.

Sharing Mary’s success is just one way that we continue to encourage women to enter the service trades. As women, we sometimes forget the important skills we truly possess when it comes to creating our own successful journeys in business and in life. Women are continuously redefining the status quo across many industries, including restoration, and it’s important that we continue to build each other up, encourage one another and believe in ourselves. The opportunities are endless!

Dina Dwyer-Owens is co-chair of the Waco-based Dwyer Group. America also knows her for participating in CBS’s Emmy-winning hit reality show “Undercover Boss” and the first-ever special episode “Undercover Boss: Epic Bosses.” Dina is a certified franchise executive with more than 35 years of industry experience, 15 years as CEO of Dwyer Group. Dina is the author of two books: Live R.I.C.H. and Values, Inc. that both share her global message for living and leading with a proven code of values.