The first three parts of this series covered an overview of chemical sensitivities, the critical importance of source removal and detailed cleaning, and products and processes that can be used for neutralization of chemical or biological residues that remain following cleaning. This section deals with the concept of off-gassing. It provides a basic summary of the off-gassing process as well as some specific suggestions for addressing residual chemicals. All of the same caveats about the approach to writing this series of articles that were laid out in part one still apply. In particular, the mention of particular products and processes are not related to any monetary gain on the part of the author but only as practical information and suggestions for consideration for the readers.

When discussing the concept of off-gassing, the term Volatile Organic Compounds (VOCs) quickly comes into play. VOCs are a large group of chemicals that have a high vapor pressure. This means that the chemicals have a tendency to evaporate from liquids or sublimate from solids (i.e., move directly from a solid phase to the vapor phase without becoming a liquid first) at room temperature. This volatility allows the chemicals to mix with the surrounding air. The organic portion of the definition means that the chemicals have a carbon component to them; and more specifically at least one carbon-hydrogen bond.

All of the scientific jargon can be a bit confusing, but three relatively straightforward concepts need to be understood if off-gassing is going to be dealt with properly by a restoration or remediation contractor. The first important concept is that VOCs typically have a scent or odor to them. Whether it is considered pleasing or obnoxious, the things we perceive through our nose are typically volatile organic compounds.

In general, VOCs are rather large molecules. Since most of them have a number of connections between various elements like carbon, hydrogen, chlorine, oxygen, nitrogen and other “chemical building blocks”, volatile organic compounds can also be chemically reactive. In a practical sense, this means that such chemicals can be broken down into smaller pieces — the subject of the last portion of this series which deals with oxidation of chemical residues to assist sensitized individuals.

A third concept, which is crucial to understanding how to approach VOCs in buildings is that many volatile organic compounds have been proven to be harmful. The catch is that the danger from VOCs in most residential or commercial situations is difficult to properly gauge because the concentrations are much lower than the occupational exposure limits which people often cite when discussing contact with such chemicals. With VOC concentrations significantly lower than what is found in workplace situations, it is no surprise to learn that in such cases:

Symptoms experienced by occupants are often slow to develop; 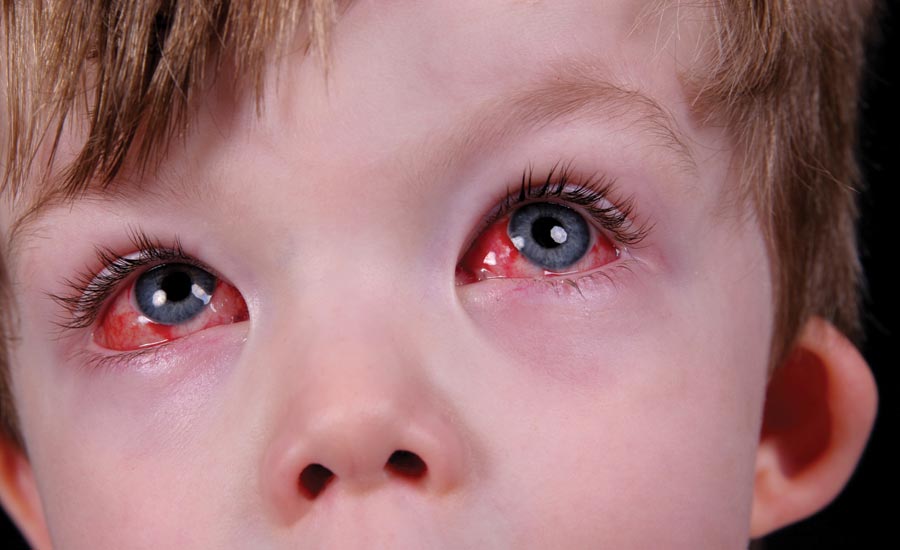 The Problem with Off-Gassing of VOCs

The Environmental Protection Agency (EPA) has numerous documents that help consumers understand the problems related to volatile organic compounds. They had to substantially ramp up their information efforts in 2005 following Hurricane Katrina after FEMA provided temporary housing in trailers that were found to have elevated levels of formaldehyde exposure.

Several of the EPA documents provide information related to health effects experienced by individuals who are exposed to VOCs. The following quote, with my layman’s explanation in parentheses to help clarify some of the medical jargon, reads as follows:

Obviously, restoration contractors must be conscious that off-gassing volatile organic compounds can have some significant health effects and make sure that any steps they take to correct the problem is not inadvertently making it worse.

Since volatile organic compounds dissipate in normal, habitable temperatures, they are extremely valuable in a variety of products. VOCs are components of many personal care products and even food. However, the greatest impact from VOCs inside structures typically comes from the actual building products and contents. As construction practices change, more and more building products are utilized which contain volatile organic compounds which are subject to later off-gassing. Some of the more common VOC-containing construction materials include: adhesives, insulation, mastics, rubber/plastic, composites, paints, finishes, OSB, particle board, engineered lumber, and decking.

From a content standpoint carpeting, padding, upholstered furniture, plastic laminates in cupboards and countertops, particle board components of furniture, and window treatments can all be substantial sources of volatile organic compounds that diffuse into the air of a building. 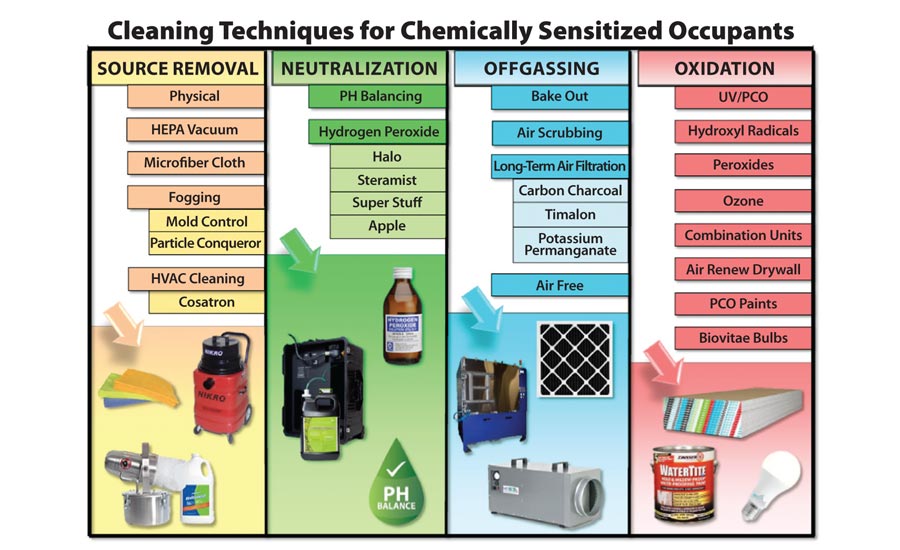 The Problem with Sealers

A technique for dealing with VOCs from building products which is often discussed is the use of “safe sealers”. The idea is that if the particle board, OSB, engineered lumber, foam insulation, or other VOC-containing building component is top coated, the VOCs will not be able to escape into the air. Of course, for the process is to be successful it is incumbent that the material used as the sealer does not contribute a significant amount of VOCs into the air.

While this theory may seem reasonable, the practical impact is that it typically just slows the rate of diffusion of the VOCs rather than stops it. And consequently, the level of volatile organics may actually stay elevated for a longer period of time than if the sealers were not applied. The practicality of the situation is that it is extremely difficult to seal every edge of every surface that is off-gassing. For example, sealing the bottom of the subfloor and rafters in the basement may slow down the diffusion into that area of the house but such steps often force the off-gassing to move up through the top of the subfloor and diffuse through the padding and carpet into the living space.

As emphasized in part two of this series, source removal is the key to dealing with chemical contamination for sensitized individuals. If the source of VOCs is contents or furnishings, source removal is pretty straightforward. The difficulty with building products that off-gassing is that removal, in the strict sense, would mean substantial dismantling of the structure. Nevertheless, the impracticality of such an approach does not mean that the concept of source removal should be completely abandoned. In situations where building components are significant contributors to VOCs in the air, the concept of source removal just needs to be modified. Rather than removing the actual materials, several steps can be taken to remove the volatile organic compounds from the materials.

One method that has been shown to be effective is a process which has been dubbed “Building Bake-Out”. Although there are a number of details which need to be incorporated to help the process result in a successful outcome, the primary steps to building bake-out are to heat the structure and then ventilate or flush it with outside air. Not surprisingly, one key aspect of an effective building bake-out is that the structure needs to be clean first. (Anyone interested in additional details related to the process of building bake out can access an entire article which explains the process at: https://www.wondermakers.com/Education/Articles/Miscellaneous-Articles)

What About Air Purifiers?

Another approach to source removal for VOCs, whether heating the structure or not, is the process of capturing the chemical residue as it off-gasses. A number of different air purifiers and filters are often employed for this task, but with VOCs all air purifiers are definitely not the same. Sadly, we deal with reports on a regular basis where people are sold an air purifying machine which relies on HEPA filtration for contaminant removal. While such machines can be very effective at removing particulates from the air, such a filtration does little to eliminate VOCs (technically, a small amount of the organic materials in the vapor phase that attaches to some of the airborne dust particles might captured in the filter, but the practical impact would be negligible).

Because of the limitations of the HEPA filter in dealing with chemical contaminants in the vapor state, many air purifying units and secondary filters made of carbon charcoal. These types of filters have been the standard for absorption of chemical residues from the air for nearly 70 years. Depending on the particular contaminants of concern, the carbon charcoal can be supplemented with other absorbent materials such as potassium permanganate or alumina.

Over the last half decade, standard mineral-style sorbent filters have been challenged in the marketplace by the introduction of filters developed around nanotechnology. This is an exciting advancement and companies such as Timilon have been at the forefront of offering filters that match with standard negative air machines which do an amazing job of collecting airborne VOCs which cause odors and exposure problems. One of benefits of the nanotechnology filters is that they trap and hold the molecules of the VOCs more aggressively than the carbon charcoal. As such, the filters load up and need to be replaced but they do not have the same tendency to desorb the trapped chemicals back into the air when they reach a saturation point like the charcoal filters.

A completely different approach to air purifiers to help deal with chemical off-gassing are the incineration style air purifiers such as “Airfree”. Rather than relying on filtration, such room air purifiers pull the air through a heater core which destroys microbiological contaminants as well as much of the standard house dust that is in the air. Interestingly, the internal temperature of approximately 400°F has a positive impact on VOCs as well. In this case, the unit is not trapping and removing the chemicals with a replaceable filter but thermally changing the chemical composition from large complex molecules to smaller constituents. Additional information on other processes that can have the same effect will be provided in the final article in this series.

Dealing with Chemicals in the Vapor State

Restoration professionals interested in assisting individuals who have chemical sensitivities need to have a basic understanding that some of the contaminants that need to be removed are in a physical form, such as small particulates, and some are in a vapor form like VOCs. Remembering those two basic states of matter when planning specific restoration efforts will go a long way in setting up projects that will actually assist the occupants with their exposure difficulties.

How Can You Tell if Your Mold Remediation Is Good Enough for Sensitized Occupants?

An Overview of Photocatalytic Oxidation Technologies for Restoration Professionals