This website requires certain cookies to work and uses other cookies to help you have the best experience. By visiting this website, certain cookies have already been set, which you may delete and block. By closing this message or continuing to use our site, you agree to the use of cookies. Visit our updated privacy and cookie policy to learn more.
Home » Cleaning Structures for Chemically Sensitized Individuals | Part 5: Oxidation of Chemicals
Restoration Training/EducationRemediation ZoneOdor RemovalOdor Removal Features

This is the last of a five part series providing insights and suggestions for restoration contractors who are faced with situations involving chemically sensitized occupants. The focus has been on individuals whose sensitivities are related to chemical exposures. However, much of the information in this series is also appropriate for individuals whose health concerns come from exposure to biological contaminants and their chemical byproducts such as endotoxins and mycotoxins. Since the information in the entire series is synergistic, readers are encouraged to review the first four parts which cover a basic understanding of sensitization, removal of source materials and detailed cleaning, neutralization of chemical contaminants in the structure, and procedures for dealing with off-gassing.

Throughout this series, detailed suggestions regarding certain work procedures, products, and equipment have been offered. Those suggestions are not based on any monetary consideration but come as a result of nearly 40 years of experience in the safety, health, and restoration industries. The information provided throughout the series is believed to be accurate at the time it was developed, but it should be viewed as general information which may need to be adjusted to fit individual circumstances.

In many ways, the concept of oxidation is similar to some of the principles introduced in the last three parts of this series. Technically, some procedures discussed for neutralization and out-gassing control involve oxidation. For example, hydrogen peroxide and potassium permanganate, two of the substances detailed in those previous articles, are both strong oxidizers.

This interrelatedness of cleaning processes means that starting with a proper understanding of key terms is essential. Very simply, oxidation refers to a process where a substance combines with oxygen. Since unbound or loosely bound oxygen atoms are unstable, they naturally combine, or react, with other chemicals to form more stable compounds. As part of this ‘chemical reaction,’ the addition of an oxygen atom may cause more complex molecules to break into two or more pieces. Because of the way the process works, any chemical that readily gives up an oxygen atom when it comes in contact with other substances is called an oxidizer.

A special form of oxidizer is created when a single oxygen atom briefly pairs with a single hydrogen atom. This unstable hydrogen/oxygen combination is also known as a hydroxyl radical. It is very effective as an oxidizer because both the oxygen atom and the hydrogen atom easily recombine with other materials. Because of the extreme reactivity of this pairing, hydroxyl radicals usually only exist in nature for a fraction of a second before they come in contact with something else and initiate a chemical reaction.

When considering oxidizers for cleaning structures that will be occupied by chemically sensitized individuals, it is critical to understand that oxidizers break down rather than remove contaminants in the environment. This breakdown process can ultimately result in simple and safe substances like water, carbon dioxide, and oxygen. However, during the process where oxidizers react with residual volatile organic compounds (VOCs) and other residue, they typically produce intermediary chemicals compounds. Oftentimes, these intermediary compounds can be as odiferous and irritating as the original airborne contaminants. For example, one of the common breakdown stages that formaldehyde goes through when it comes in contact with an oxidizer is the creation of formic acid. At that point, further reactions with more oxidizers will typically break the formic acid into carbon dioxide and water. 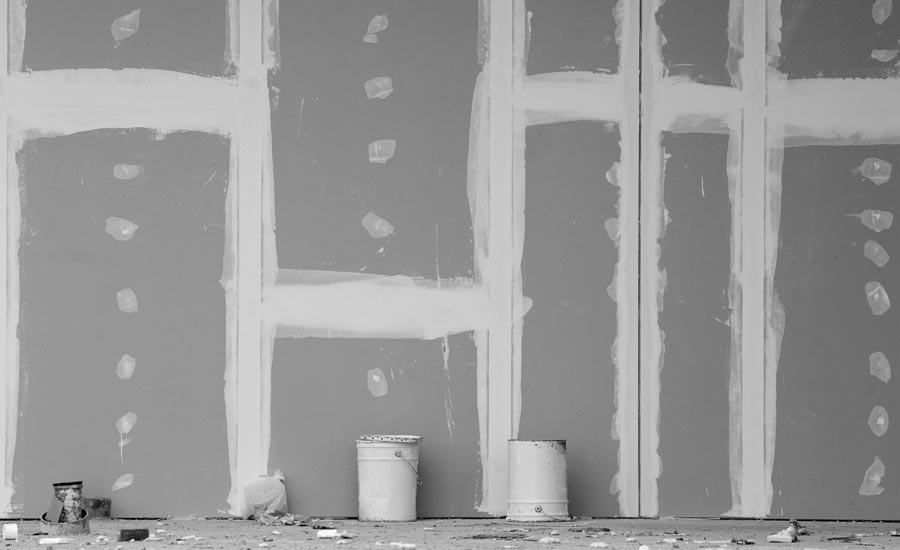 When considering oxidizers for cleaning structures that will be occupied by chemically sensitized individuals, it is critical to understand that oxidizers break down rather than remove contaminants in the environment.

Although the chemistry of oxidizers can seem confusing, the key takeaway from the brief science lesson is that the oxidation of chemical contaminants in structures can cause the production of other chemical compounds that were not there in the first place. Because of this, oxidizers are best used to eliminate residual compounds that cannot be taken care of by source removal, detailed cleaning, ventilation, or neutralization/capture.

For commercial purposes most oxidizing processes are some form of photocatalytic oxidation (PCO). That fancy sounding term means that the unstable oxygen atom is created when light rays of various frequencies interact with certain chemicals. Depending on how the photocatalytic oxidation process is employed, it can be defined as either an active or passive system. While many individuals in the restoration industry are familiar with active PCO systems in the form of ozone generators and hydroxyl radical generators, the passive systems are the hot trend right now for addressing low levels of chemical contaminants in buildings.

A passive system of photocatalytic oxidation that is growing in popularity is the use of light-sensitive paints. Most of these incorporate some form of titanium dioxide into the paint. The wall surfaces are painted, the shades are opened, and the UV rays present in natural sunlight react with titanium dioxide on the surface of the paint to create a continuous stream of hydroxyl radicals. In some situations where chemical contamination in a particular area has been addressed by source removal and cleaning, surfaces can be painted and a UV light installed. This will in turn shine at the painted surfaces 24/7 in order to get the oxidizing impact of the hydroxyl radicals. Such passive systems with a mechanical assist are often most useful in attics, crawl spaces, or unfinished basements where turning on the UV light does not pose risk to the occupants.

Another passive approach for addressing chemicals is not really photocatalytic but is based on absorption and chemical neutralization. This innovative process involves finishing various surfaces in the building with either special gypsum board or light-sensitive paints. Special gypsum board, such as Air Renew by Certaineed, is actually manufactured with specific materials mixed with the gypsum core. This allows the center part of the drywall to actually trap volatile organic compounds and break them down. Because of the publicity surrounding formaldehyde exposure from flooring materials improperly imported from China, much of the testing related to VOC reduction for the drywall has focused on formaldehyde. The manufacturer’s tests indicate that the drywall can continue trapping and break down VOCs for up to 75 years after installation. The catch is that water-based acrylic, breathable paints, or breathable wallpaper should be used for the finish so that migration of air and chemicals into the drywall from the interior of the structure is not blocked. 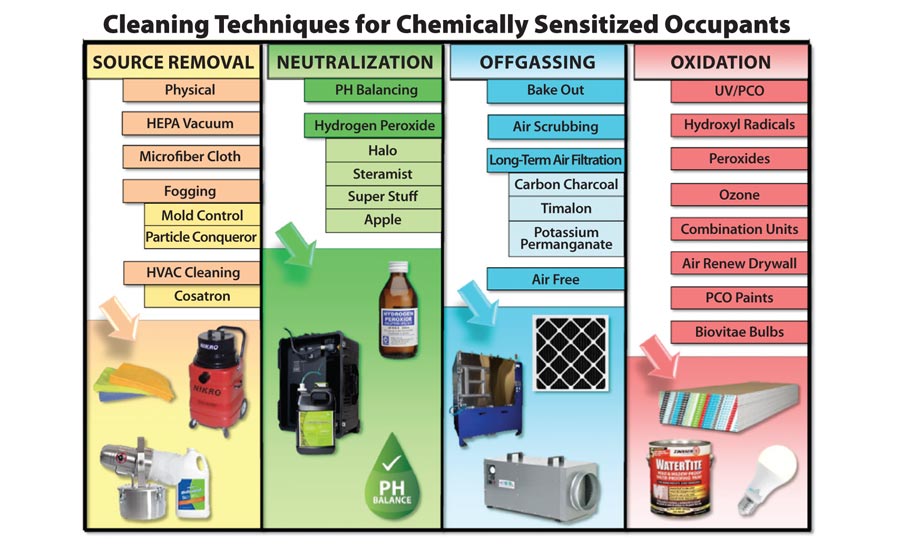 As compared to passive systems, active PCO systems utilize electrical equipment to form the oxidizing agents. Building on the previously explained science, ozone generators convert normally stable oxygen (two oxygen atoms bound tightly together) into ozone (three oxygen atoms, but the extra bond to the original pair of atoms is weak). This loosely-held oxygen atom readily reacts with other substances in the air and on surfaces. In contrast, hydroxyl radical generators create oxygen/hydrogen compounds where both atoms are loosely bound and can cause reactions.

Ozone generators are typically constructed with a series of metal plates and small separations between them that are energized. The air is pushed through the gaps between the plates where the electrical discharge from the metal breaks down some of the oxygen and/or water vapor in the air which allows the free oxygen atoms to recombine into ozone. In contrast, most hydroxyl radical generators utilize some form of ultraviolet light to force the breakdown of water vapor which results in the hydroxyl radicals. Some hydroxyl radical generators utilize a catalyst such as titanium dioxide, the same product put in the passive PCO paints.

The safety of both ozone generators and hydroxyl radical generators is still being discussed. Years ago, ozone generators were advertised as being safe for use in occupied environments. Later research showed that there were a number of detrimental effects from being exposed to ozone. This eventually led to regulations which limit the amount of ozone that can be produced in an unoccupied location by devices sold as air purifiers. Currently, the manufacturers of commercial hydroxyl radical generators advertise them as safe for use in occupied environments. Given that hydroxyl radicals temporarily create intermediary byproducts as they work, serious consideration should be given to restricting them to unoccupied areas when there are heavy odors until the strong odors are dissipated.

Perhaps the newest variation of active PCO systems is a lightbulb with an LED source surrounded by glass shell with a thin titanium dioxide coating. As the lights are operated they actually produce hydroxyl radicals which the lightbulb manufacturer claims kills microbes and reduces VOCs. This Biovitae bulb has received an extensive marketing push in Europe. The studies are mixed as to whether they produce enough hydroxyl radicals to actually do anything, but that has not stopped the technology from making its way “across the pond” to North America.

Of course, another approach to active PCO systems is to utilize a combination of technologies. The Purayr product is just such a combination unit which incorporates ozone, hydroxyl radicals, UV lights, and HEPA filtration into a single piece of equipment.

In many respects it is easy to get captivated by technology. Everyone is always looking for the “magic” chemical, equipment, or technology that is going to easily resolve the problem. It is no different for individuals who are trying to provide service to the chemically sensitized population. Nevertheless, there is a reason that such solutions are derided as magic; they have little basis in fact and generally do not work.

As boring as it sounds, the primary steps in improving structures for safe occupancy by chemically sensitized individuals are source removal and detailed cleaning. While understanding the basics of multiple technologies is extremely useful, care should be given that technological solutions are not substituted for proper cleaning. Such technologies should only be used appropriately to assist with residual problems after source removal and cleaning have been completed. Choosing wisely from the multitude of available technologies will help professional restoration contractors and their clients address chemical contamination issues. Hopefully, this series of articles provides a basis of information to make those wiser choices.

Restoration Chemistry: Understanding the Benefits and Pitfalls of Using a Chemical on the Job Site

Michael A. Pinto is chief executive officer of Wonder Makers Environmental, Inc., a manufacturing and environmental consulting firm that specializes in identification and control of asbestos, lead, IAQ, mold, industrial hygiene, and chemical problems. Mr. Pinto is the author of over 215 published articles and several books and serves on the board of the Indoor Air Quality Association (IAQA), and as the chairperson of the Environmental Council for the Restoration Industry Association (RIA). Michael can be reached at 269-382-4154 or map@wondermakers.com.