This website requires certain cookies to work and uses other cookies to help you have the best experience. By visiting this website, certain cookies have already been set, which you may delete and block. By closing this message or continuing to use our site, you agree to the use of cookies. Visit our updated privacy and cookie policy to learn more.
Home » When the Disaster Comes to You
Water Damage RestorationFire and Smoke Damage RestorationCatastrophe RestorationManaging Your Restoration Business
R&R Roundtable

When the Disaster Comes to You

In the restoration industry, we talk about catastrophe loss quite often. In fact, R&R is launching a conference dedicated to educating restorers on handling CAT claims. However, there is a common misconception when it comes to disaster restoration: that traveling is required. Sometimes, the disaster comes to you – and it’s vital you are prepared to help your community when that happens. This special R&R roundtable discussion brings in the viewpoints from two restorers who had major disasters come to their doorsteps in 2017. 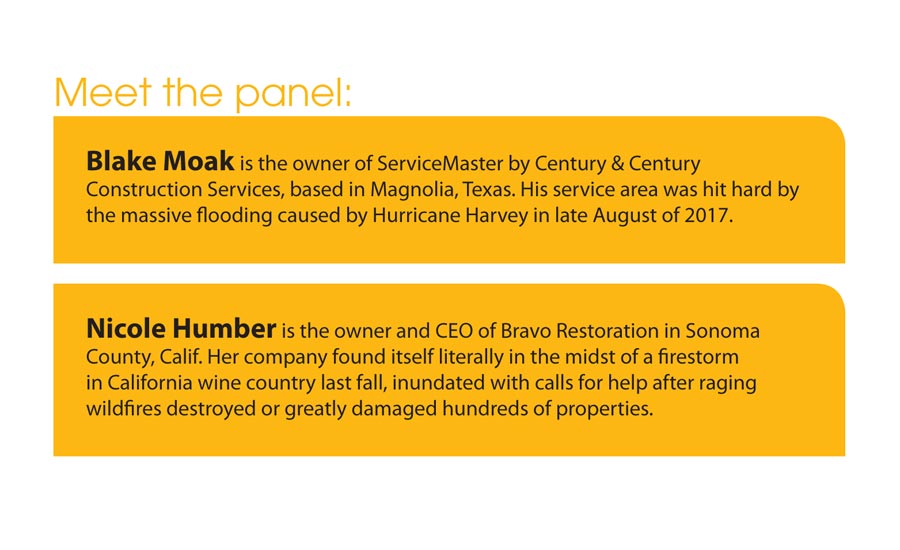 1. Tell us about the disaster itself. How long did it last, and what was it like knowing you were about to be inundated with work?

Nicole: The fires burned for two days straight with no containment whatsoever. Five days in, there was a 50 percent containment. I was in Napa at a wedding, and I remember leaving for the hotel seeing the fire blaze the mountain top and naively thinking that must be a controlled burn. Within the next hour, at around 2 a.m., we received a call from our neighbors who we were all being evacuated, and that they were going to try to grab our dog, I still was naively thinking this isn’t that big of a deal, we can just handle it in the morning. Then the last call came in that they couldn’t get our dog and they were leaving. Due to road blocks, it took us hours to sneak in and get our dog. I stayed positive the entire time until the third day we were heading back to the shop from boarding up a medical facility and you could see the fires blazing from the freeway on the hill behind my house and down the street from my shop and at that moment I cried for the first time with fear I could lose everything. 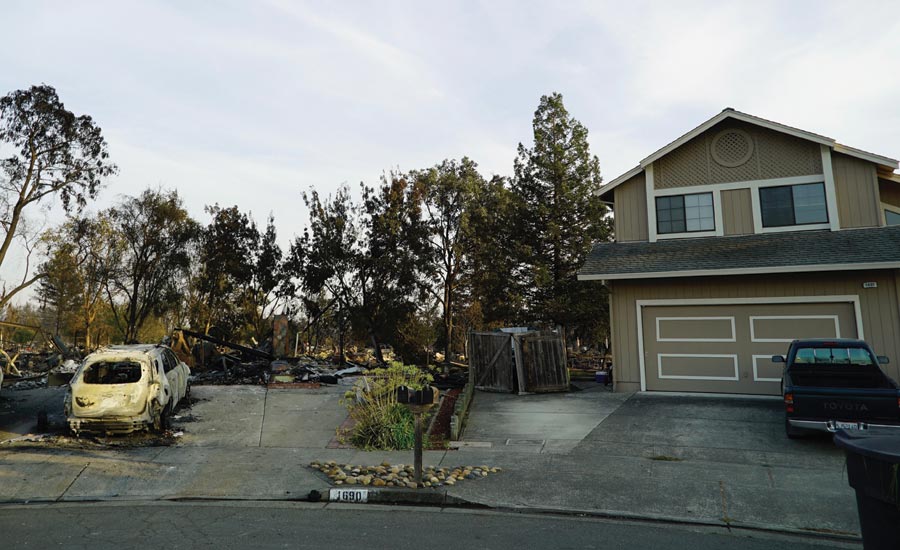 Blake: We started working 10 days ahead of the storm. A week prior, we started buying equipment to get it before everyone else. We had been training all summer in case there was a storm on the Texas coast, and had contracts with some companies in the area if that did happen. We started preparing by buying sandbags, tarps, and so on. We had crews out a week to a week and a half ahead of the storm boarding up and preparing grocery stores we had contracts with. We followed the storm closely – up until the day it hit Texas, we were doing board-ups on the coast. About 12 hours prior to landfall, we pulled our crews and sent them home, and waited out the storm. Then, we sent them back out as soon as the storm left a certain area. For example, we went to Corpus Christi, and worked our way in behind the storm. For days, there was nothing they could do in Houston – so we just got out the boats and started rescuing people. There were about six of us in various locations in boats. It was a surreal feeling. These were nice houses, huge neighborhoods, completely underwater, with helicopters flying overhead. It was like being in a third world country. 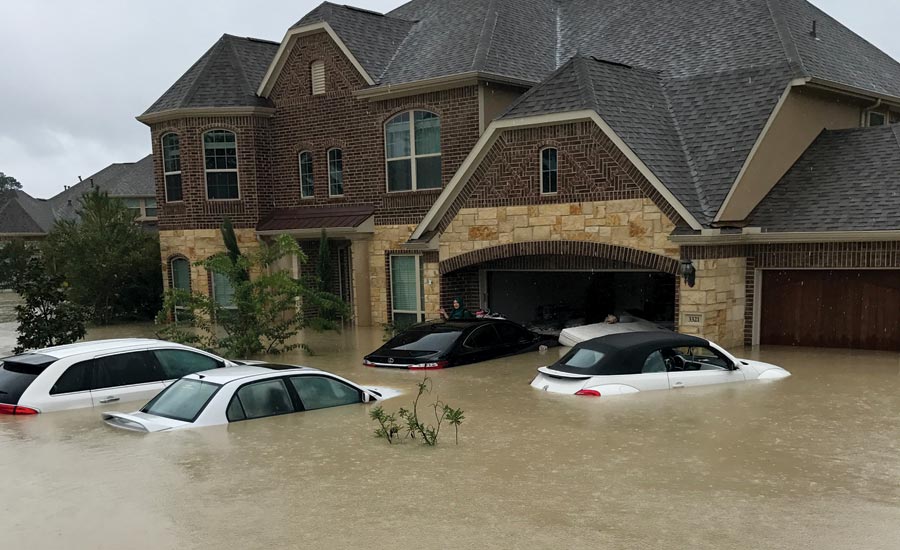 This was the condition of neighborhoods Blake and his team visited in boats after the hurricane passed. Photo courtesy of ServiceMaster by Century. 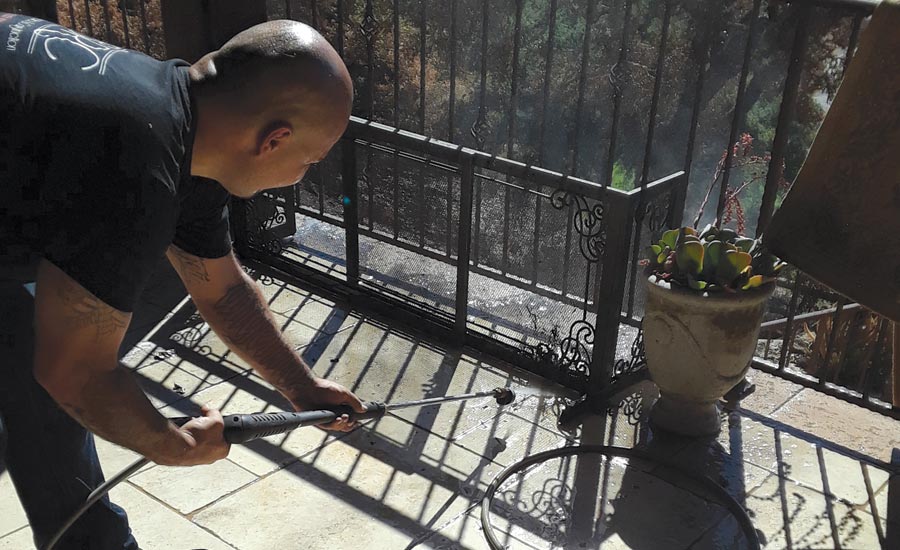 Part of the Bravo Restoration team works on a fire loss after the Tubbs Fire.

2. What was it like once the work started coming in?

Nicole: Before the fires, I had minor community involvement. I have only owned the company since July 2016 so I have been focusing on stabilizing the foundation of the company, but when these fires happened I quickly went online explaining to people the importance of keeping their doors/windows closed, wearing proper masks, getting out of town if possible. The smoke was in our area for the entire week. Due to the fires being so close to my home and office, we were able to give back to a lot of our community be it information or free evaluations. Some of our clients were teachers from my boys’ school. It was very important to me to do a good job, take care of my neighbors, and educate those around me. Now that we are finishing up the cleaning of homes, I can confidently state that I accomplished that goal. We helped a lot of people get back into their homes quickly and safely.

Blake: There was no marketing. Before it even started raining, we had 400 phone calls from 10 p.m. to 2 a.m. the night it hit Corpus Christi. The superstars of my office were my phone team – they fielded thousands of calls. It was incredible. We stayed in a war room situation with about six or eight of us for a good 30 to 40 days. I finally had to say okay, out of the dorm, back to our desks. It was never ending. We felt we had plenty of resources. We had people, we had equipment, we had jobs, but we couldn’t get to people – the whole city was gridlocked. It was a good two months before this got better. 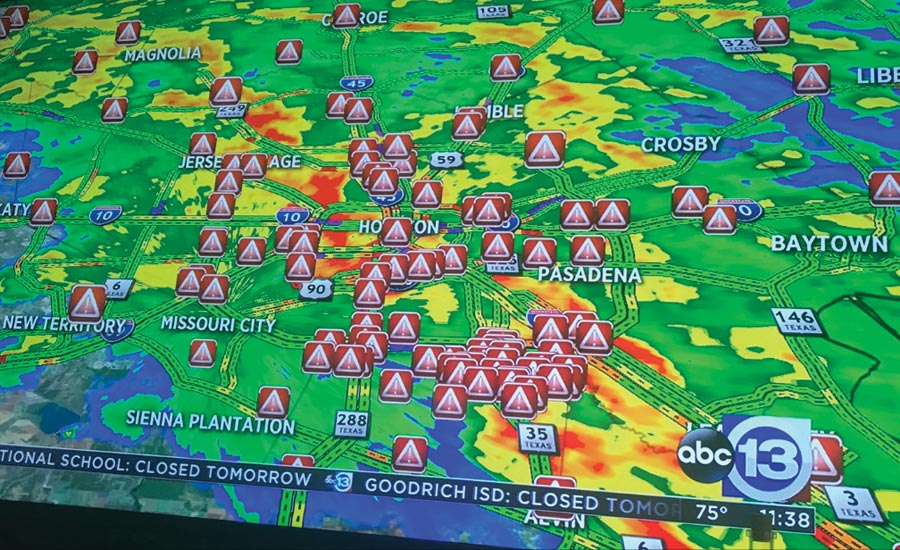 3. Did you encounter any payment or other hurdles along the way?

Nicole: We had one insurance company who put a stringent pricing matrix on us that was approximately 45% less than what our estimates were with everyone else. They delayed approvals, making it difficult for homeowners to feel comfortable being in their homes, and declined the use of air scrubbers. Aside from them, I have to say it was pretty smooth considering the circumstances.

Blake: We’ve done a lot of floods over the years, and we just go in with a price comparable to what FEMA pays, have the homeowner pay us, and then they deal with the FEMA claim. We require 50% up front, and 50% on completion.

4. What was the biggest, most interesting, or most challenging job you handled?

Nicole: I would have to say our most memorable job was one of our first ones it was a high-end home. We almost didn’t receive the job because they were not impressed with our reconstruction Yelp reviews. I had to explain the background and how I purchased the company to make it better and really showcase how much we cared about people. The crew did a phenomenal job on their home, and got them back so quickly. The wife had respiratory issues and was so thrilled to be back in their home. They then went out of their way to review us on Yelp, and sent our company a long thank you card. It was such an overwhelming feeling to be able to help people get back in their homes so quickly and have the efforts be so appreciated. It had a lasting effect on every member of our team and that has driven us through all of the homes we did and kept our heads up on some of the more difficult homeowners. 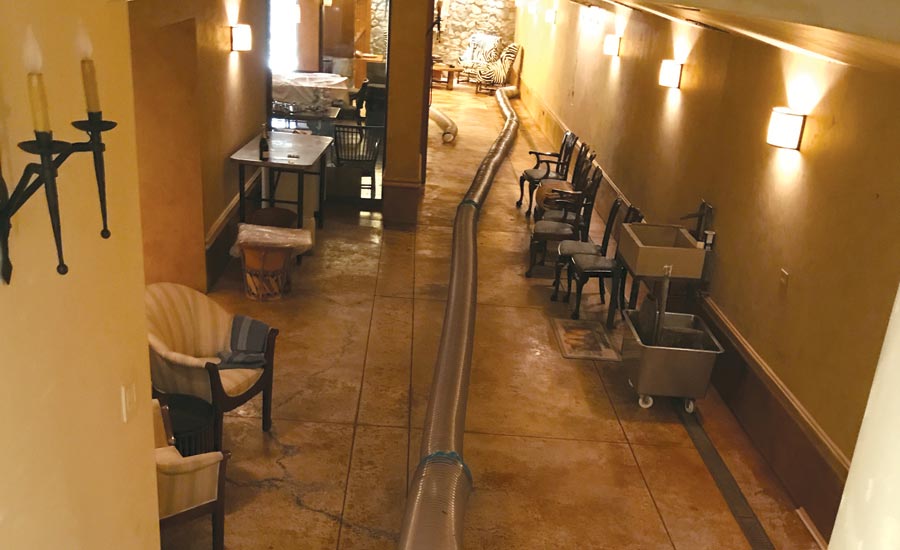 Bravo sets up equipment at a larger loss after the wildfires. Photo courtesy of Bravo Restoration.

Blake: We did a YMCA that had 8 feet of water in it, affecting 50,000 square feet of space. Not only did we do this job, but right before we did it, I was in that area in a boat. We drove the same route in the trucks as we had in a boat not long before. It was a block building, not a lot of drywall, but there was a tremendous amount of mud and items displaced. Just everything was a nightmare. There were two gyms with wooden floors that had been just pushed up like 10 feet high from buckling. Just the amount of water and mud in the building was ludicrous. It took us about 30 days to finish the job. 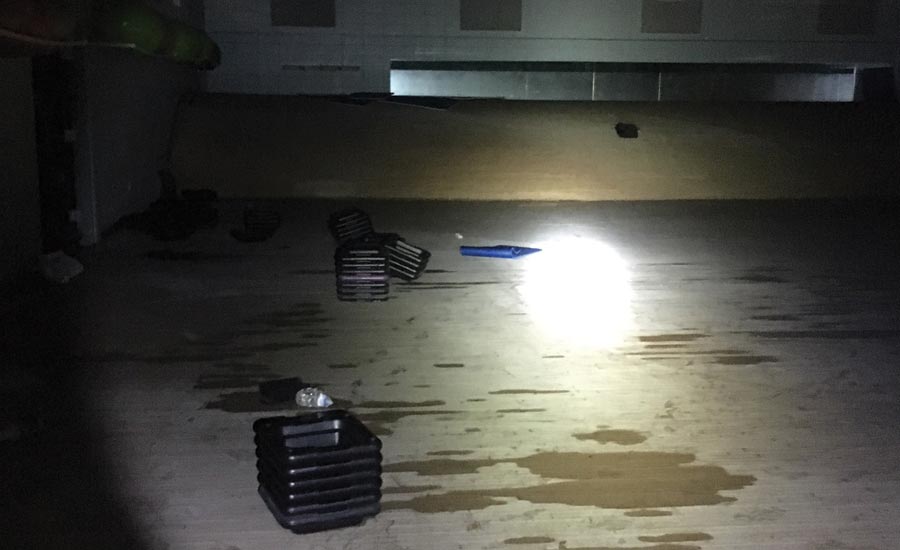 Through the darkness, you can see the buckled wood floor inside the YMCA gym. Photo courtesy of ServiceMaster by Century.

5. Talk about some of the most memorable moments from the disaster.

Nicole: The fire was approximately three miles from our office. There was a lot of unknown for the first three days. My employees had places to stay, but some couldn’t do laundry because they were staying in hotels, so when we got our power back at the shop, they brought in their laundry and our office manager Chris washed and folded it all. It didn’t seem like much, but it meant more than we can imagine. 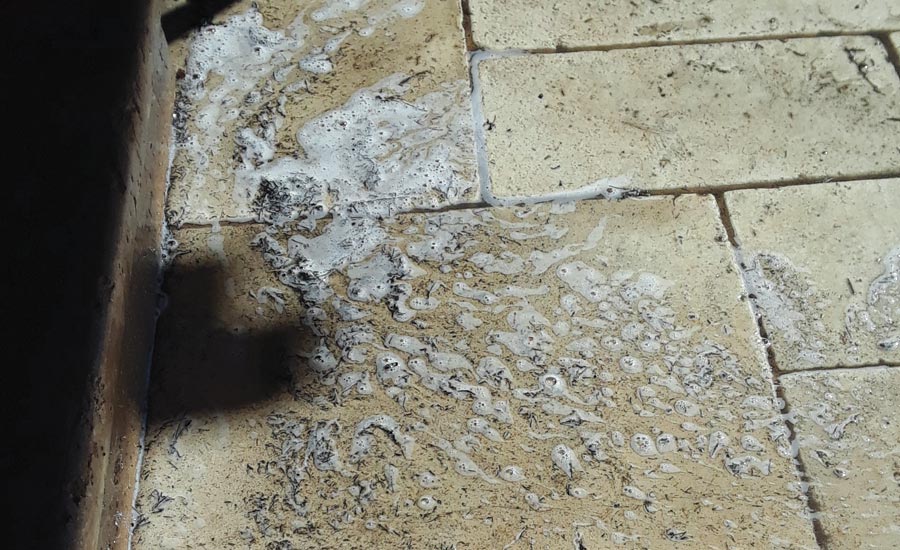 After the fire, many homes were covered in ash that had to be washed away. The odor from the fires will linger for months, and revives in intensity with weather changes. Photo courtesy of Bravo Restoration.

Blake: Our city banded together like no city I’ve ever seen. Everyone banded together – both locally and those who traveled to the area - to get people back on their feet. Many groups in the area had already done a lot of demo work like pulling carpet and drywall to stabilize homes. Yes, there is a whole lot of mold, but I thought it was going to be a whole lot worse. It’s thanks to people who came in to help stabilize situations. 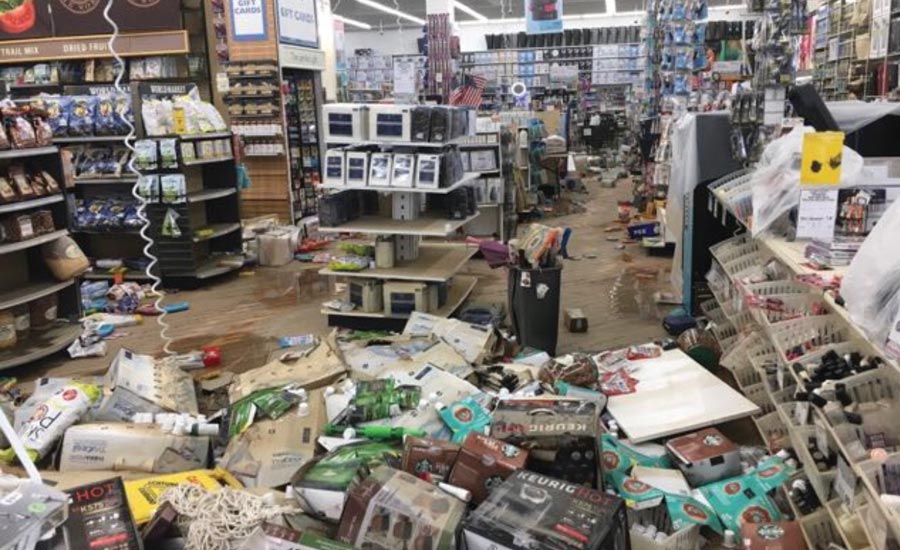 The aftermath of Hurricane Harvey. Photo courtesy of ServiceMaster by Century.

6. What advice would you give fellow restorers about being prepared for the disaster to hit home?

Nicole: Have a game plan, be ready with how are you going to do this, figure out a pricing matrix to make sending out estimates a lot quicker, and drink lots of 5 Hour Energy, you will survive this. It was interesting that the Thomas Fire in Ventura County happened two months after the Tubbs Fire in our area so I was able to help those restoration companies that were so quick to help me.

Blake: Being in disaster restoration, we all spend most of our time focusing on educating and selling others on the idea of being prepared with a plan when a disaster strikes. However, we often don’t prepare ourselves well enough to deal with a large scale disaster in our own backyard. While most of us prepare well with our equipment/tools and labor, we forget about the things that matter most. Like what happens when our employees/labor are personally affected, or ALL the roads are closed or our own cars are flooded out. You have to think through these things and know how you will still be able to operate when you yourself, your office or your workforce is personally affected. And secondly always remember when you’re in it mentally and physically drained beyond the point of exhaustion, “it’s all just a moment in time.” It will pass before you know it and things will be back to normal. Stay calm and press forward.

CAT Claims: What Happens When You Choose to Join the Circus

Are You Controlling Where Your Business Comes From?

Deciding When to Demo, and When to Restore