Corelogic Estimates Nearly 7.4 Million Homes are at Risk of Storm Surge Ahead of Hurricane Season and an Uncertain Economy

CoreLogic® (NYSE: CLGX), a leading global property information, analytics and data-enabled solutions provider, today released its 2020 CoreLogic Storm Surge report, revealing nearly 7.4 million single- and multifamily homes with more than $1.8 trillion in combined reconstruction cost value are at risk of storm surge and possible mandatory evacuation in the midst of a global pandemic. With the Atlantic hurricane season officially starting on June 1, many states are still under stay-at-home orders or strict social distancing guidelines – causing economic stress on housing and forcing communities to develop new logistical measures to recover from natural catastrophes. This year’s analysis outlines these operational ramifications, the economic recovery challenges exasperated by the virus, and shares ways to get ahead of what is potentially to come.

This hurricane season begins as the economy struggles, with an unemployment rate that has exceeded 14% in April 2020, and cities at high risk of storm surge damage also face risk of mortgage delinquencies. Miami (5.1%), New York (4.7%) and New Orleans (6%) had elevated mortgage delinquency rates in February, well above the U.S. rate (3.6%) and two months ahead of the spike in U.S. unemployment. Miami, New York and New Orleans are also near the top of the list for storm surge risk, ranking first, second and fourth, respectively, for risk to single family homes. “If a hurricane causes significant storm surge damage during a time when mortgage delinquencies are already high, this could result in additional losses for homeowners, lenders and insurers – and ultimately, delay economic recovery for impacted communities,” said Dr. Frank Nothaft, chief economist at CoreLogic. “For example, our analysis shows that three months after 2018’s Hurricane Florence made landfall, serious delinquency rates had doubled in major metros affected by the storm.”

“Storm surge has historically been the deadliest and most destructive hazard we deal with,” said Dr. Thomas Jeffery, Principal, Science and Analytics at CoreLogic. “Now, with hurricane preparedness and response logistics potentially compounded by the pandemic, it has never been more important to pay attention to storm warnings and prepare for the possibility of hurricanes making landfall this year along the Gulf and Atlantic coasts.”

The annual CoreLogic Storm Surge report provides an evaluation of the number of homes in the United States that are vulnerable to storm surge, particularly the properties that line the coastlines from Texas up to Maine. The analysis identifies single-family (SFR) and multifamily residences (MFR) at risk of storm surge during the 2020 Atlantic hurricane season, including the total estimated reconstruction cost value (RCV), which is calculated using the combined cost of construction materials as well as equipment and labor assuming total (100%) destruction of the property. In 2020, there are 7,110,779 SFRs and 252,657 MFRs at risk of storm surge to date. The RCV for SFRs tops $1.7 trillion, while MFRs tops $95 billion.

CoreLogic looked at the top 15 metropolitan areas with the greatest number of SFR and MFR homes at risk for storm surge. These areas account for 68.8% of the total RCV of storm surge risk in the United States in 2020. 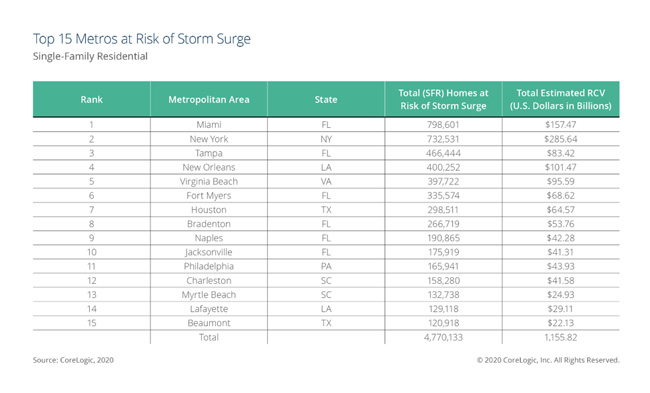 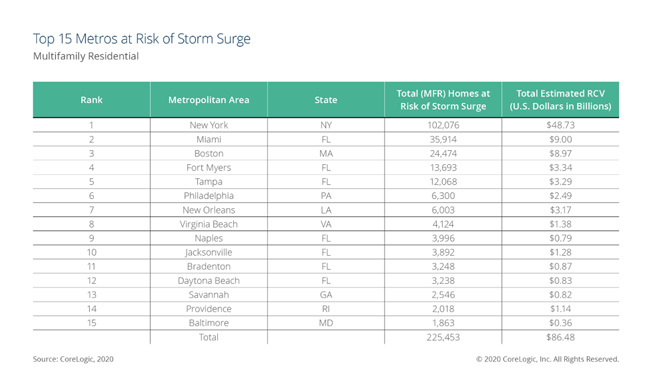 This year, preparation, evacuation, and response to hurricane season will look far different than the average year. As of May 28, New Jersey is still under a shelter-in-place order, with states such as New York, Maine and Virginia only beginning regional reopening. Experts caution that social distancing measures will continue throughout the summer and fall. The report outlines recommended solutions for challenges brought on by the pandemic, including how to practice social distancing during an evacuation and assess the resulting storm damage using virtual and geospatial solutions.

“Insurance companies can be the source that connects many of these solutions providers, such as construction companies and hotels, that can assist people impacted by hurricanes,” James R. Swayze, Executive, Insurance Claims at CoreLogic says. “The key to ensuring a speedy recovery in the face of new COVID-19-created challenges is insurance companies’ use of virtual assessment and claims tools. Creating a faster and more efficient claims process can help alleviate other community-wide disruptions.”

The analysis in the 2020 Storm Surge Report encompasses single-family residential structures less than four stories, including mobile homes, duplexes, manufactured homes and cabins (among other non-traditional home types). It also encompasses multifamily structures, which include apartments, condominiums and multi-unit dwellings. It is important to note that the inclusion of high-rise residential units such as those listed above may skew both the numbers associated with storm surge risk. This is because lower-level units are most likely to be affected, whereas the units above the second floor will rarely, if ever, experience storm surge flood damage.

Year- over- year changes between the number of homes at risk and the RCV can be the result of several variables, including new home construction, improved public records, enhanced modeling techniques, fluctuation in labor, equipment and material costs and even a potential rise in sea level. Indeed, this year's addition of new data in the form of multifamily structures has increased the total number of structures at risk. For that reason, direct year- over- year comparisons should be warily considered. To estimate the value of property exposure of single-family residences, CoreLogic uses its RCV methodology, which estimates the cost to rebuild the home in the event of a total loss and is not to be confused with property market values or new construction cost estimation. Reconstruction cost estimates more accurately reflect the actual cost of damage or destruction of residential buildings that would occur from hurricane-driven storm surge, since they include the cost of materials, equipment and labor needed to rebuild. These estimates also factor in geographical pricing differences (although actual land values are not included in the estimates). The values in this report are based on 100% percent (or “total”), destruction of the residential structure. Depending on the amount of surge water from a given storm, there may be less than 100% damage to the residence, which would result in a lower realized RCV.

To evaluate storm surge risk at the local level, CoreLogic uses the designation of CBSAs, which are often referred to as metropolitan areas (>50,000 people), or micropolitan areas (<50,000 people). The CBSA represents an urban center and the adjacent regions that are socioeconomically tied to that center. The specific areas identified in this report are named by primary urban center, though each may contain additional urban areas.