There is no doubt that the hardest line of business to write going into 2020 is Commercial Auto. For years, insurance carriers underpriced auto premiums and it caught up to them, resulting in auto being unprofitable for many carriers. According to the National Association of Insurance Commissioners, Commercial Auto losses are on the rise for the fourth consecutive year. The national average for increased rates has been around 12%, even for accounts with no claims. Contractors have always been a higher rated class. I have seen many accounts get 25-40% rate increases with little to no claims. If you are in a “tough state” like Florida, Louisiana, Texas, or California, and your loss ratio is over 50%, the likelihood of your premiums doubling is not out of the question. One carrier who writes a fair amount of restoration business is pulling out of Commercial Auto coverage all together in California and Texas because of their loss history.

What is the driver behind these increases? There are countless explanations, but it comes down to five main reasons.

Distracted driving – Don’t kid yourself, we all have done it – read or sent a quick text while driving. Whether texting, eating, rubber-necking, or messing with the navigation system, these play a huge role in accidents. Nearly 10% of fatalities were blamed by distractions. Looking away for just five seconds to send or read a text while driving 55 mph is like driving an entire football field with your eyes closed.

Rising vehicle repair cost – It’s not “a couple grand” when you get into a fender-bender anymore. Having advanced technology in our vehicles is great, like backup cameras and blind spot sensors, but they contribute to loss severity. These sophisticated parts are costly to repair, and they are not getting cheaper.

Rising medical costs – Over the last five years, economic losses from bodily injury claims increased more than 10%, which is well above the 3% medical inflation rate over that time. The Insurance Research Council (IRC) states that expenses for medical care, lost wages, and other out-of-pocket expenses are nearly 80% of all claimed economic losses.

Changes in litigation – You have to love all of the personal injury lawyers, right? It seems like every billboard is promoting an attorney asking if you have been hurt in an accident. Ten years ago, less than half of auto injury claims had an attorney representing the claimant. Today, nearly 55% of bodily injury claimants will hire an attorney. Litigation funding is also on the rise. This is where outside investors pay upfront legal fees in exchange for a percentage of the settlement or judgement. In turn, this makes claimants more inclined to go to trial, go to physical therapy, use chiropractors, and have costly diagnostic procedures like CTs and MRIs.

Large verdicts are also becoming commonplace, as there is a growing public sentiment for injured plaintiffs and fault being put on businesses rather than individual drivers. In 2017, the largest verdict in a motor vehicle case was more than $154 million.

Driver inexperience – Anyone who is under 25 is considered “youthful” in the eyes of insurance carriers. We all know it is not easy to find loyal, hard-working water technicians in their 30’s and 40’s. Driver turnover is on track to reach its highest turnover since 2013, according to the American Transportation Research Institute. This has forced companies to recruit younger drivers with less experience, training and shorter driver records.

Of course, frequency is always worse than severity, meaning your company is worse off if you have multiple small claims versus having one large loss. In the eyes of an underwriter, frequency leads to severity. If you have a high number of small claims every year, they expect that you will have a large claim coming, so they will price accordingly.

There are a number of things to consider adding to your risk management strategy:

If you have been in restoration for a while, and you have not had many GL claims, you likely saw your rates decreasing year over year. There is a fair amount of research pointing to those days coming to an end. With catastrophic natural disasters ever increasing, underwriting losses seem to continue, which will mean rate increases are inevitable. Many think we could be heading toward a “hardening” market, where there is less capacity, fewer carriers writing specific lines of business or industries, and increased premiums.

Depending on where you are in the country, property and commercial auto have already hardened, where other lines of business tend to have a one to two-year delay. Lloyds of London is the largest property re-insurer in the U.S., and they have taken some huge losses between all the hurricanes and fires that have occurred since 2017. As they have looked to increase reinsurance rates, that price correction gets passed on to the carriers.

In restoration, we have already seen several insurance carriers exit the market, non-renewing their entire book of general liability, pollution, professional liability (GL/CPL/PL), and excess liability business. Other carriers have taken a stance to increase rates 25% across the board due to rate inadequacy, meaning they charged too little for too long and it caught up to them. Still, these are a small number of carriers compared to the overall market. Most commonly, carriers want to thoroughly underwrite those who are involved in reconstruction/build-backs a lot more.

If you perform most of your reconstruction internally, rather than subbing it out, you could be viewed in a negative light because you are taking the bulk of the risk. For those who sub it out, you will likely have to answer an increased number of questions, but you can help yourself by having a strong sub-contractor agreement. Make sure you require high limits, be named as an Additional Insured (for ongoing and completed operations), are provided Waiver of Subrogation, and have strong “indemnify and hold harmless” language in your contracts.

To prepare for a hardening market, there are three important strategies:

When you have care, custody, and control of the property of others, you have created a bailment. Even if it is locked up in temporary storage and you have a key, you are liable for your customer’s property. In recent years, restoration contractors have been able to endorse Bailees coverage as a “rider” on their GL/CPL/PL policies. Environmental carriers made accommodations to help their customers be compliant with the growing number of TPA’s that were requiring $250,000 in coverage. Traditionally, Bailees had been a part of inland marine policies. There are several issues that arise when Bailees is endorsed on your GL/CPL/PL policies, but we will focus on the main two.

First, Bailees that is part of GL/CPL/PL will erode your aggregate limits since it is not a “separate bucket of money”, as it would be on an inland marine policy. Due to most requirements, most restorers carry $1,000,000/$2,000,000 GL/CPL/PL limits. If you have a $250,000 Bailees loss, your aggregate limit would then be reduced to $1,750,000. This may seem like plenty, but do not forget the statute of limitations for construction defects in most states is seven to 10 years. Although we are in a strong economy now, many people do not believe it can last forever. Whenever there is a downturn in the economy, you start to see more and more people reaching for money and it is common to see an uptick in construction defect claims. Those can be very expensive and you will want your full limits in place.

The larger issue, in my opinion, is nearly all Bailees coverages endorsed to a GL/CPL/PL have the valuation section pay Actual Cash Value (ACV). This can leave you holding the bag if you have a large loss, as you are legally liable to your customer regardless of what your insurance carrier pays out.

As an example, let’s say you have a piece of furniture your customer bought four years ago for $10,000. Over that time, it has depreciated to $6,500. It was partially damaged in a recent loss, where it then became worth $5,000. Then a loss occurs at your warehouse, where it was damaged by smoke and water, so it now only worth $2,000. If you have ACV, the carrier would only be obligated to pay $2,000 when settling the claim.

Recently, there was a restorer whose warehouse burned down with customers’ personal property inside. Since they had ACV, the carrier properly paid only paid 20 cents on the dollar according to the contract. Now, the insured is having to defend lawsuits from their customers out of pocket.

To make sure you have the proper protection, I strongly encourage you to purchase true Bailees on an inland marine policy, where there is a separate bucket of money, and be sure it is replacement cost. I know of only two carriers that can offer replacement cost Bailees. One of them can offer upwards of $10 million in limits.

More and more restorers are doing contents as part of their services in order to have full control of their projects, but far too often I find they are grossly underinsured. Just because a TPA requires you to carry $250,000 in limits, you can easily blow through that if you have more than five to seven houses packed out. Consider this formula as a guideline the next time you are looking at your own Bailees limit: 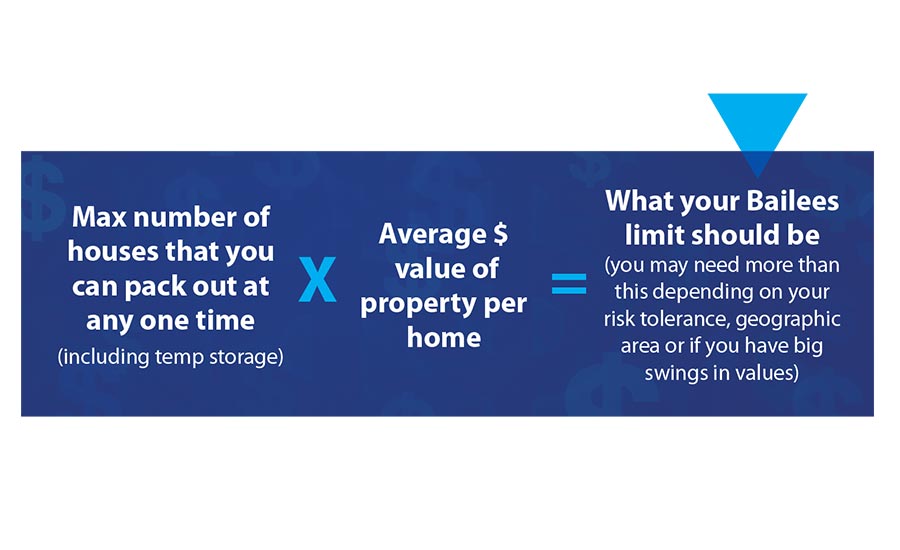 The insurance market is constantly evolving, and these are just a few things you need to stay on top of as we head into 2020. Given the fact that we live in a highly litigious country and you are in an industry with great risks, do your part to get ahead and be proactive with your own risk management. As always, make certain that you have an agent that truly understands what you do and the risks that you face. Be sure that they have access to the right markets that will allow you to have the peace of mind needed so that you can focus on continuing to grow your business.