Odor removal in general can be one of the trickier elements to any restoration project. When it comes to large loss, removing the smoke odor (for example) from a warehouse the size of Ikea is no easy feat. It takes a knowledgeable restoration company and the right equipment to get the job done the right way, so there is no residual odor – and the odor doesn’t return later.

The senior vice president of operations for Paul Davis National’s (PDN) commercial division, J Murphy, took some time to chat with R&R amidst all the California wildfires to talk about how they have mastered the odor removal process on large loss projects.

1) Tell us a little bit about Paul Davis National.

J: We handle projects across the country. First, we do an initial assessment and review, then organize the jobs from there. Paul Davis National was created to help the Paul Davis Network, which handles mainly residential jobs, take on large loss projects. It is too difficult for a franchisee to retool their company to do a large loss every few years. So, if a franchise gets a large loss, PDN comes in and helps with the equipment, helps run the job, and so on. Then, we remove the entire operation when the job is done so the franchise doesn’t incur any of those costs.

2) Why is odor removal so difficult, especially in large losses?

J: In fires, the product that burns is what creates the odor and every type of fire is different, therefore odors are very different (think about synthetic items like curtains or carpet that burn, versus the smell of burning wood, or the smell of a protein fire). When odor is generated, you have to tackle it differently, depending on the distance from the source. For example, “near-fall” odor is closest to the source of the heat; the heat embeds the odor into the surface it touches. “Far-fall” odor is further away, and more just settles on top of the surfaces.

3) What is your go-to odor removal process?

J: PDN started using hydroxyl to get business up and running as fast as possible. We had to find a way to minimize the amount of demo and tear-out time. What we’ve found, over the years, is if we can find a way to address the “far-fall” odor that isn’t embedded into the surface, hydroxyl works. So how do you get hydroxyl to the surface to do its job? You get creative!

4) How has PDN gotten creative with odor removal?

J: If you take a look through the images above, you’ll see pictures from a high school fire where there were rows and rows of lockers embedded into concrete walls. Lockers are very difficult to take out, and doing so often does more damage than just putting in all new lockers. So we had to come up with a way to create an environment that would allow the hydroxyl to address the odor behind the locker. We covered and encapsulated the lockers to create a chamber, and focused the hydroxyl ions into specific areas. You can focus the energy of the hydroxyl generator where you like; and if you don’t, you’re losing its potency. It’s more cost-effective to focus the hydroxyls. 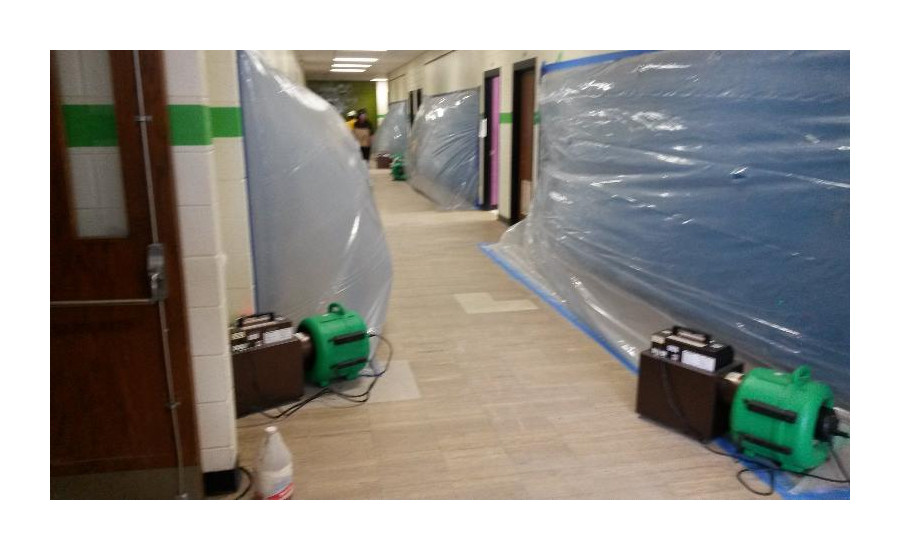 We also handled another fire in a school gymnasium that caused more than $6 million in damage. While the fire itself was contained to the gym, there was 30,000 square feet with smoke and odor damage. the school didn’t want to bring kids back into the building with the smoky odor, so PDN pumped hydroxyls into the space and completed the job in just three weeks.

Paul Davis handle large losses at four schools in a 12 month span because they were able to build on the success of the first loss.

J: The proof is in the lack of odor! Insurance companies love it because they save a bunch of money, and the client/insured likes it because it takes less time to remove the odor! Often, customers cannot believe the difference. When hydroxyl was first introduced to the insurance community, they were skeptical. Once you show adjusters and carriers the benefit, the daily cost becomes inconsequential. It’s accepted now as a value-added service to an odor-ridden job, no matter the source.

When Paul Davis was first introduced to hydroxyl as an odor-fighting tool around 2010, they chose a brand that was just not effective. Those machines were used once or twice, then Paul Davis found another brand that produced much different results. Within two months, PDN owned over 60 Odorox units.

J: Safety is #1. With hydroxyl, you can use it while people are in the area. Also, ozone will break down certain types of materials. You have to be very careful about what materials are in the area where you’re using ozone!