According to the Merriam Webster Dictionary, the definition of “If it ain't broke, don't fix it” is an informal way to say that one should not try to change something that is working well. It is attributed to Bert Lance, the director of the Office of Management Budget during the Carter presidency. Like most idioms, this one gets overused and misused. However, when talking about criteria for judging the successful completion of a mold remediation project, it actually applies quite well.


The Advent of the Mold Remediation Industry Was a “Surprise”

Many professionals now working in the mold remediation industry were not present at its inception. For them, mold remediation has always been a subset of restoration along with fire, water and contents. The fact is, just over two decades ago mold remediation burst into the consciousness of restoration professionals because of a massive lawsuit in Texas. In that case, the policyholder sued their insurance company because the dry down of a water loss went horribly wrong. It was claimed that the response to the water intrusion led to mold growth to such an extent that the occupants of the home all became ill. Eventually, after years of wrangling, the multi-million-dollar structure was demolished. 1

In a very short time, everybody was aware of the potential problems with mold. Guidelines were developed, standards were written, training classes were developed, certifications were designed and a number of states started regulating the work. However, as the mold remediation aspect of restoration grew into its own subset of the industry, one thing was missing: A universally agreed-upon criteria for determining the difference between a successfully completed mold remediation project and one where additional cleaning was necessary. Part of this was due to the fact that early in the development of the industry there was debate over which sampling technique was most appropriate.

The development of the mold remediation industry ran parallel to the introduction and acceptance of spore trap samples, as compared to the traditional culture sampling using petri dishes. Within just a few years of their introduction, spore traps became the sampling method of choice for most mold remediation professionals. Still, the ability to collect a spore trap sample and then analyze it brings the need for comparison criteria for the data.

Over the past two decades many additional sampling techniques for fungal material have been announced beyond culture samples and spore trap samples. The introduction of sampling systems with names like ERMI, HERTSMI, EMMA and INSTASCOPE present the mold remediation professional with a plethora of options, each claiming to be the best, and often the newest, technology to once and for all solve all of their sampling needs. Few mold professionals have the time to really dig into what any one system actually can and cannot do for them. We will leave the discussion of multiple sampling systems – and their appropriateness for initial investigations, pre-work sampling and post remediation – for a future article.

The purpose of this discussion is to revisit the notion of a spore trap “Clearance Criteria,” and discuss what such a standard is and why it can be useful to everyone involved in a mold remediation project. Because of the turnover of professionals in the industry over the last 20 years, we will focus on a long-established spore trap post-work verification criterion as a teaching example. 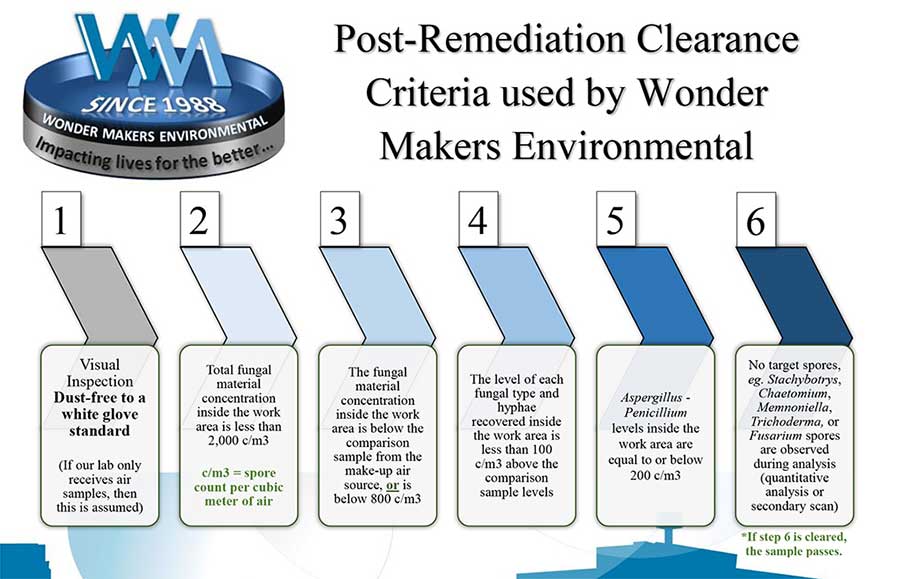 
The Parameters of a Good Clearance Criterion

To be truly useful across projects, a post-remediation clearance criteria needs to be unambiguous. A useful standard will eschew terms like the IICRC S520 “normal fungal ecology” or the insurance policy “pre-loss condition” in favor of fixed numerical end points. The use of a flat value, such as less than 2,000 spores per cubic meter of air, allows a standard to be useful in multiple environments and from project to project, often without the need to conduct pre-work sampling. Additionally, by setting a numerical value on “clean” that is not tied to the relative local conditions, meeting or exceeding the industry standard of care can be a natural part of each project.


Why a Post-Remediation Clearance Criterion Is So Important

After discussing what a post-remediation clearance criterion needs to be, the natural question is, “Why should my business use such a standard?” There are three primary reasons why any consultant or contractor might choose to utilize a standardized clearance criterion.


Is There Such a Post-Remediation Clearance Criterion?

Understanding the importance of having a universal and realistic post-remediation clearance criterion, the team at Wonder Makers Environmental developed a white paper in 2004. This paper was based on a review of previous research studies from around the world where air quality experts had looked at mold levels and classified them from a health or acceptability standpoint. From these studies the details of what constitutes “normal” versus “clean” environments was statistically determined. The methodology of the work was validated by the fact that it was published in the peer-reviewed journal, Professional Safety, in November 2004.

The publication of this practical example of a functional standard was well accepted from the start. Because of the journal publication, the clearance criteria was not kept proprietary and was free to industry, with only the standard attribution due for any published material. As such, the criteria developed by Wonder Makers Environmental has been in use for over 15 years. During that time, additional validation studies have been produced and shared at various industry association events. More importantly, its use has expanded globally, and been incorporated into recommended project guidelines by many organizations and industry associations such as the National Organization of Remediators and Mold Inspectors (NORMI).

Wonder Makers developed a “Clearance Standard” that is a straightforward criterion, but it only applies to spore trap cassettes. It is an example of an easily understood definition of clean that exceeds the industry standard of care. In six steps, the Wonder Makers Clearance Standard works like this:

What Makes This Better Than Other Approaches?

How does what was discussed earlier about a solid standard apply to this criterion? On a basic level, it is a good working definition of clean for the air quality relating to fungal material in the air that can be applied to almost any structure. If a work area can meet this standard, it is almost certain that the work completed there was effective enough to be within the industry standard of care. Additionally, almost any technician, homeowner, office manager or project manager can take a sample result report from nearly any laboratory and, by following the steps, determine if the sample is clean enough to justify pulling down the containment barrier.

Probably the most important aspect of the post-remediation clearance criteria that needs to be shared with a new generation of mold remediation professionals is the fact that it works, and has done so for a long time. The projects that fail need more work before the environment is ready for occupants. The ones that pass do not result in additional problems after the fact. Indeed, this criterion is a good current example of following the idiom, “If it ain't broke, don't fix it.”


Looking Toward the Future

While similar standards have yet to be developed for many of the new sampling techniques now coming to market, that does not preclude the fact that in the future, the technologies that persist with the industry will need a clear sample interpretation guide to help them transition from being a niche product only utilized by environmental professionals to a normal part of the post-remediation sampling process. As these new sampling systems begin to see more use, and the data accumulates relating to what a clean environment looks like, a similar standard will begin to emerge that establishes the same premise on different grounds, since ultimately clean will never be mold free, but it will always be clean.

1Any Google search of the term “Melinda Ballard Mold Case” will bring up tens of thousands of references in a split second.

Jacob Kooistra is an environmental specialist with Wonder Makers Environmental, Inc., a manufacturing and environmental consulting firm that specializes in identification and control of all types of indoor contaminants. For 10 years, Kooistra has worked in the property restoration industry, specializing in mold remediation and caring for sensitized individuals. In his current position, Kooistra assists building owners and occupants when they face indoor air challenges related to mold, lead, asbestos and chemicals. He can be reached at (269) 382-4154 or jsk@wondermakers.com.