This Q&A between R&R Editor-in-Chief Michelle Blevins and ARS Restoration Specialists Branch Manager Kori Medeiros details the importance of establishing key relationships and emergency response plans with local businesses, and being ready to get to work at any hour.

Give us some background on ARS.

ARS Restoration Specialists has seven locations throughout New England, and has been in business for 32 years. The company has about 150 employees, and does full mitigation and reconstruction. The company was recently acquired by A RESCON Company six months ago, which has been buying successful, family-owned restoration companies on their way to building a national brand.

2.  What is a recent large loss your team has handled thanks to pre-established relationships?

We got the call at 2 a.m. on May 14, 2018, from the Mass. Eye and Ear hospital in Boston. We already had established a relationship with them, and just two months prior had discussed what services we could provide to their facility.

In this case, a pipe had broken in a mechanical room. Water rushed through the facility, affecting six floors and about 20,000 square feet of seminar rooms, labs, examining rooms, offices, and more. Essentially, nearly an entire wing of the massive building was impacted, and multiple doctors had offices throughout the wing.

3.  Walk us through the restoration process.

On the first day, we had 10 to 15 people on site from the 2 a.m. call to 7 p.m. stabilizing the area. Heavy extraction was done throughout the building, and affected ceiling tiles removed. In the first day alone, we set up more than 150 pieces of equipment. Thankfully, there was power coming to the building, so that was not an additional hurdle.

After stabilization, the goal was to do indoor air quality testing to make sure there was nothing in the air harmful to  people or labs in the facility. As a medical facility, we had to make sure it was safe for everyone! The tests came back clear, so our team started removing everything that needed to be removed, while creating the least amount of disruption. An InjectiDry system was used in areas where demo wasn’t needed. Plus, all the furniture was cleaned, but fortunately no major contents restoration work was needed.

Reconstruction started as soon as everything was dry. To stay organized, we had the supervisor of one of the subcontractors heading up the mitigation; he used his own reconstruction crew, which really helped us move through the job quickly. As I said before, we got the call on May 14, and our reconstruction was completely by the end of June. We had the facility back to 100 percent normalcy in just over one month. 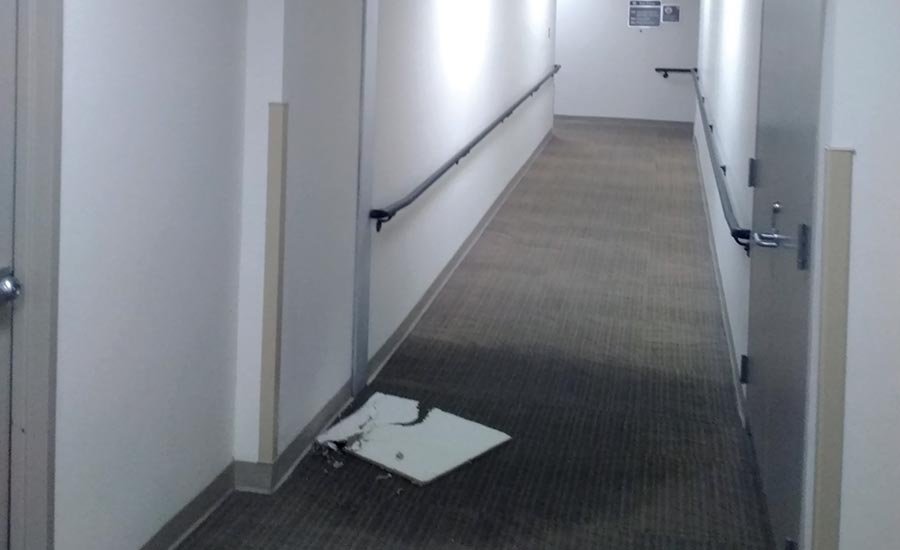 Communication was key during this job. The head of maintenance was our contact, and we sent him daily recaps of what was accomplished, and steps for the next day. Thankfully, we’ve handled other jobs like this in the past, and had a good workflow established.

4.  What was the biggest challenge on this job?

The biggest hurdle was keeping the hospital staff happy. Working in their space was obviously a disruption. We also had to keep everything as clean as possible given this is a medical facility.

5.  What are you most proud of from this job?

Turning a six-figure mitigation job around in a little over a month! Communication and setting a roadmap to completion are key. People want to see an endgame and see you’re meeting your deadlines each day.

A First Time for Everything: Large Loss