“The work involved was intensive. The clients needed extra care. It was complicated. There were a lot of wrenches thrown into the works. But the family was deserving and grateful; it was satisfying and worthwhile. If there was anyone who deserved this, it was them.”
-Sonny Bukky, The Bed Bug Pros

The State of Ohio is consistently  among the states with the most bed bug problems. In 2018, Cleveland and Cincinnati were the top two worst cities for bed bugs, based on service requests to pest control company Terminix. A nationwide 2015 study by PestWorld.org found that almost 100 percent of pest control companies had treated bed bugs within the past year; which was up from 10 and 15 years prior. Apartments/condos, single family homes, and hotels/motels were the three most common places for bed bugs to be found. However, 58 percent of pest companies also treated bedbugs in nursing homes in 2015; 45 percent treated them in office buildings; and 43 percent treated them in schools and day care centers. Remediators in the study agreed that among the pests they treat, bed bugs are generally the most challenging.

The last week of September, 2018, Roth Construction in Cleveland, Ohio, got a call from a property management company. Tenants had been complaining about some pest and hoarding issues coming from a neighboring condo. The health department had already been involved to a certain degree, and some cleaning done, but this required professional intervention. Not knowing what to expect, Lisa Rothacker of Roth Construction agreed to visit the condo and called in Sonny Bukky of Ridtek, also known as The Bed Bug Pros, to come along.

“The moment we stepped into the condo, we noticed there were rodent droppings going up to the condo itself,” Bukky said. “We could see bed bugs on the ceiling. It was bad enough they were out in broad daylight, hanging out.” 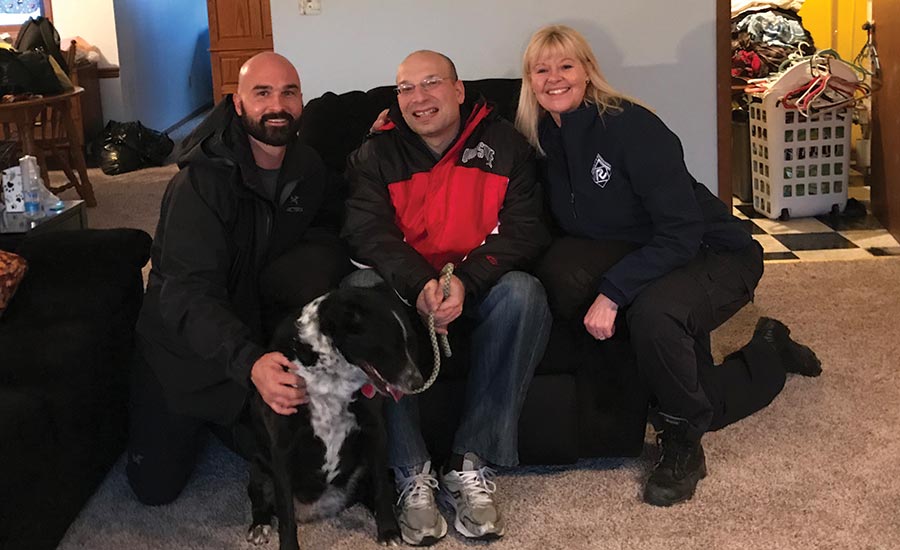 Sonny Bukky and his dog, Levy (left) and Lisa Rothacker (right) pose with one of the family members in their newly cleaned condo. Photos courtesy of Roth Construction

Bukky’s company has been in the bed bug business for three years now, using both chemical and heat treatments, as well as biological agents, to eradicate the pests from big housing projects, mansions, single family homes, and everything in between. He also has a border collie mix named Levy who is trained to detect bed bugs. They have a contract with Roth Construction to inspect their warehouse monthly as a preventative measure against bed bugs which can stow away easily in items from pack outs and even on crew members from a remediation site.

When Bukky got his first look at one of the beds in this condo, he immediately estimated as many as 30,000 to 40,000 bed bugs on that one single piece of furniture. Bukky said it was a 10 out of 10 on the severity scale; it was “literally alive” he recalled. He estimates the bed bugs had been in the home for as long as two years, and were so prominent, they could be seen crawling even on the family as they spoke. They were covered in bed bug bites from head to toe.

The clients, who agreed to be part of this article, were going to require some extra TLC as the mother, father, and son suffer from various physical and mental health issues. Plus, the family did not have the money to pay out of pocket for such a large, uninsured remediation project.

Rothacker said when they stepped out of the condo, she knew this was a job they needed to do, and decided it would be their Day of Service Contractor Connection project for 2018. Rothacker recalls an initial conversation with the client explaining the extent to which items would need to be thrown out, but ensured them, “you are part of the Roth family now; we are going to get through this together.” Much of the project involved emotionally caring for the family. 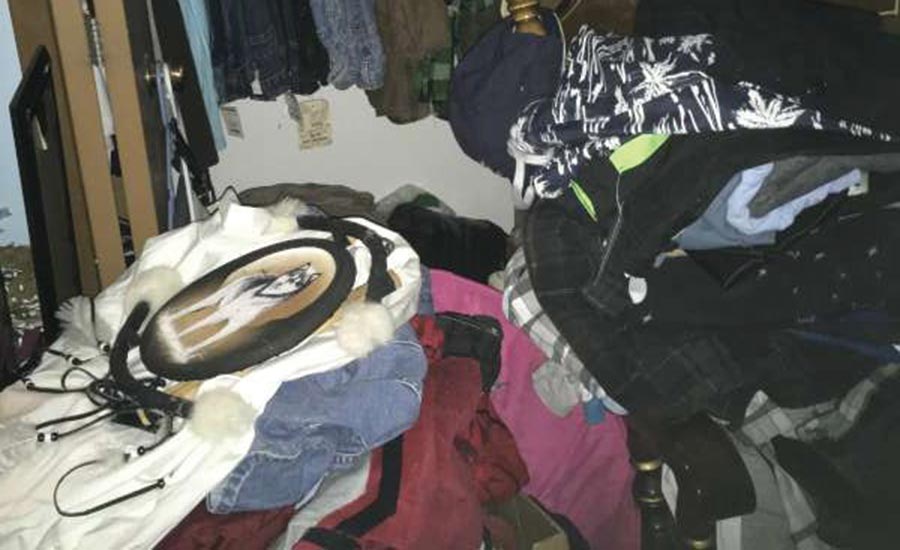 The first phase of the project involved a team of five from Roth, fully suited up in PPE, to sort through and throw away 60 to 70 percent of what was in the condo. There was trash, clutter, lots of paperwork, clothing, and so much more strewn throughout the living spaces and garage. Stuff was bagged and heat-treated, or went right to the dumpster - including much of the furniture. In all, two 40-yard dumpsters were filled with discarded items. The family was part of the pain-staking process of sorting through everything, deciding what to keep and what went.

“This was really a teamwork-type process,” Bukky explained. “I don’t do miracle work, we do teamwork.”

As far as the mattresses went, the Roth crew bagged them up before carrying them to the dumpsters to make sure they were contained. Bukky explained that once exposed to the outside environment, the bugs wouldn’t last long.

“Bed bugs don’t like the cold, or extreme heat. They’re also full of blood, so they attract other critters that live outside,” Bukky said. “Put a bed bug infested mattress outside, they are out in the elements and exposed to natural predators.” Inside a home, he said, bed bugs are in paradise with endless food sources and warm places to hide.

Once affected items were out of the condo, the bed bug remediation process began. The first heat treatment happened between Oct. 9 and 11. To increase efficacy, Bukky sets up fans to move the hot air around. Heat treatments kill all stages of the bed bug lifecycle. After the heat treatment, chemical treatments were done on Oct. 11, 18, and 26. A biocide was applied on Nov. 5, and reinspection done a few weeks later with Levy to confirm all the bugs were officially gone. The follow up and reinspection are a very important step to the process.

“There are microclimates during the heat treatment process. For example, there may be an area behind a tack strip that doesn’t heat up, and if you don’t have chemicals in place, you risk reinfestation if any bugs make it through heat treatment,” Bukky said. “Bed bugs are genetically resistant to some products, and build resistance to others. Just like we build antibiotic resistance. We can accidentally build superbugs if we aren’t using effective remediation processes.”

The job wasn’t done when the bed bug remediation process was complete. Roth Construction did everything they could to give this family a fresh start. That meant new beds and bedding, new furniture, gift cards for food, new carpeting and padding, and even a new TV when a mishap by a family member during the cleaning process ruined their existing one. By this point in the process, Bukky, Rothacker, and the entire Roth team had become emotionally invested in the project. The team understood they were asking a lot of the family when it came to throwing away much of what they owned, and allowing crews in their space day after day. The family went through other health scares and hospital stays during and even after this project was complete. 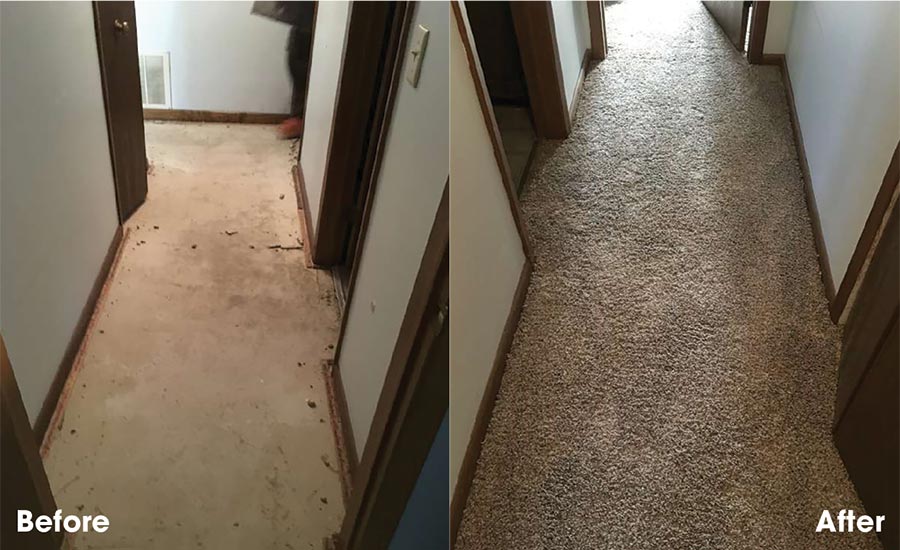 “This was the only good thing that has happened to them in the last few months of us knowing them,” Rothacker said. “As restorers, we don’t get emotional over jobs very often, but this job was very emotional. Would I do it again? Absolutely. I would do everything again. I would do it the same. We wouldn’t cut any corners. The family deserved it.”

Together with Bukky, Roth Construction is using this job to help further educate apartment and property managers in their region. They are also building what they affectionately call a bed bug barbecue to use as a hands-on educational opportunity for bed bug remediation.