The Fourth of July is always a time we join together to celebrate our freedom. We enjoy food, fun and firecrackers. But beyond all the celebration, I like to reflect on who made this freedom possible.

Veterans and active duty service men and women are the reason we get to enjoy freedom not just on the Fourth of July, but every day. So, on this special holiday I honor the men and women who have served our country with bravery, hard work and fearlessness.

It’s those same three characteristics that I specifically look for in the people who represent Restoration 1. The restoration industry isn’t for everyone. It takes a special kind of person, owner, operator and employee to get down and dirty each day and help customers turn what could be one of their worst days into a day of hope.

It takes a special kind of person to embody the grit and can-do attitude of a professional in our industry. It’s not for everyone, but I’ve found that it is a great match for a veteran.

Veterans are in a league of their own, and this especially shines in a business environment. They are ideal candidates for the restoration industry because their military background has perfectly equipped them to follow a proven system and accomplish it with success. Additionally, they’re not afraid to get down and dirty, they work until the job is done and they understand the importance of exceeding expectations.

Mann is a native Texan who owns a Restoration 1 in the Houston suburb of Conroe. He’s a six-year Combat Engineer veteran – three years of active duty and three years in the reserves – who proves that when the going gets tough, the tough get going. 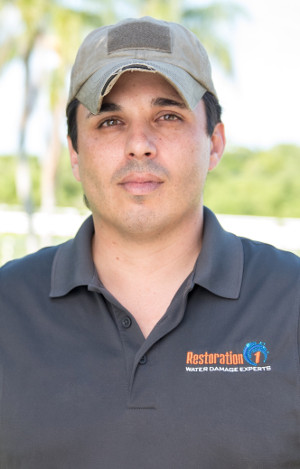 His military training taught him to never give up, especially when things get hard, and that has translated well into his restoration business. As we know that a job can last longer than anticipated and require more work than originally thought, Mann refuses to leave until the job gets done. He saw the positivity and appreciation this business brought to his community and he knew he wanted his family to be a part of it.

He is now a business partner with his wife, Shanan and the Manns continue to use a military background to better their community.

Joey Buchino served 13 years in the Army, rising in the ranks to a Sergeant First Class before returning to civilian life. As Joey told me when he first joined the team, after leaving the Army he didn’t know exactly what he wanted to do, but he did know one thing for sure: he didn’t want to work for anyone. A restoration business was the perfect fit for him!

The mighty Armed Forces taught him how to follow a system, work hard and never give up. He traded his combat boots for work boots and began active duty in his own business. It isn’t always easy, especially after a disaster hits. But Buchino is committed to his work and his community and enjoys restoring homes and businesses to their former glory.

Both Mann and Buchino credit their leadership skills to their military training and experience. Working with a team is a crucial part of being in the military – a skill that has followed them in being small business owners and getting the job done correctly and efficiently.

These are just two examples, but there are many more. So many veterans look to make the transition from the front lines to civilian life. So, to help this transition, years ago the VetFran program was created to help them join the business world.

VetFran started in 1991 and re-launched in 2001 after the September 11th terrorist attacks. Created as a way to thank veterans and help assist them and their families, today VetFran is supported by the International Franchise Association and offers financial discounts, mentorship, and training for veterans seeking employment or hoping to be their own boss with participating franchise organizations after returning home.

VetFran helped Buchino and Mann find their fit in the restoration industry, and I encourage other veterans to look into the industry and see if it could be a fit for you as well.

I consider Restoration 1 to be a family, and I’m more than proud to have veterans in the family.

Gary Findley is the CEO of Restoration 1, one of the country’s fastest-growing restoration franchises. Headquartered in Waco, Texas, Restoration 1 has more than 250 franchise locations open and in development across the U.S.