Prepping for Disaster: The Age of the Drone

It goes without question the use of drones – both in business and for recreation – has truly taken off over the last few years. Now equipped with technology like cameras, thermal imaging capabilities, and even computers, drones are being used in industries across the board. For law enforcement, drones help spot criminals on the run from the air; for the government, they can help monitor terrorism; for farmers, it’s a whole new ability to monitor crops; and for insurance carriers, drones offer the ability to look at assets – both before and after a disaster. These are just the tip of the iceberg.

In a Forbes article last spring, the director of the University of Maryland’s UAS Test Site predicted “drones may end up being one of the most productive and lucrative uses of autonomous technology and robotics.” Likewise, Bill Gates has stated he believes drones will be more impactful than people ever realized.

There are facts and figures to back up those claims. A study by McKinsey & Company in December 2017 found the U.S. commercial drone industry had grown from $40 million in 2012 to more than a billion dollars in 2017. By 2026, the study estimates commercial drones, for both corporate and consumer applications, “will have an annual impact of $31 billion to $46 billion on the country’s Gross Domestic Product.” An interesting note from the study is that while drones may be considered a disruptive industry because they displace less efficient players, they also have the potential to be a constructive industry by creating thousands of new jobs embracing the technology and limitless uses. 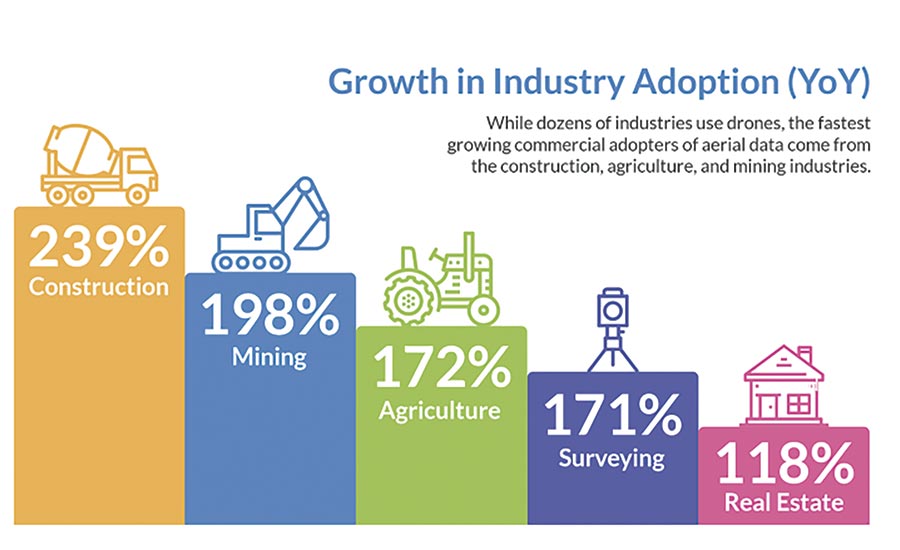 The construction industry has seen the most growth in the last year, followed by mining and agriculture.

Zeroing in on the construction industry, we are the fastest growing commercial adopters of drones, and the proof is clear. Jono Millin founded DroneDeploy with his two best friends in 2013. Fast forward six years and the San Francisco-based company has more than 100 employees, helps customers in 180 countries, and has raised $56 million in capital – and growing. Their biggest focus is the construction industry, including restoration.

“We have worked with a lot of the major players in construction, maintenance, and reconstruction. When you think of new tools to create digital snapshots of the world, it’s very helpful,” Millin said. “Applications are very broad; we’ve worked a lot in the commercial insurance space, looking at water intrusion on roofs especially.” 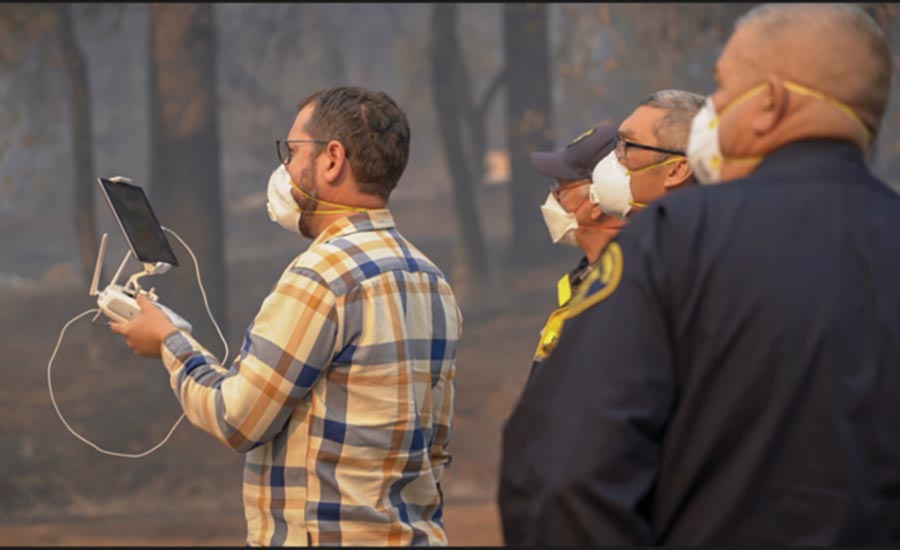 Unlike satellite image services, drones are less impacted by cloud cover, and able to get fresh angles and perspectives. Plus, with drone technology, you can get more than just digital images – you can get thermal images as well. Millin explained that you can create a thermal map when there is a thermal gradient, which will show warmer and cooler areas where moisture may be present. This is allowing restoration contractors and insurance carriers not only to more accurately scope losses, but to also identify potential problem areas before they create a structural issue.

There are a number of restoration companies that already have and utilize drones for scoping insurance restoration projects; that is where resources like DroneDeploy step in, on the software side. The software controls flights of drones and captures correct information, then uses algorithms to process the images the drone captures into 3D models, much like technology like Matterport does inside structures.

“These are unique, to-scale models, so they can be used for measurements, and also geo-located,” Millin said. “Once you have the 3D model, you have the visibility in the real-world and you can compute things like volumes, monitor changes in the structure or ground, etc.” 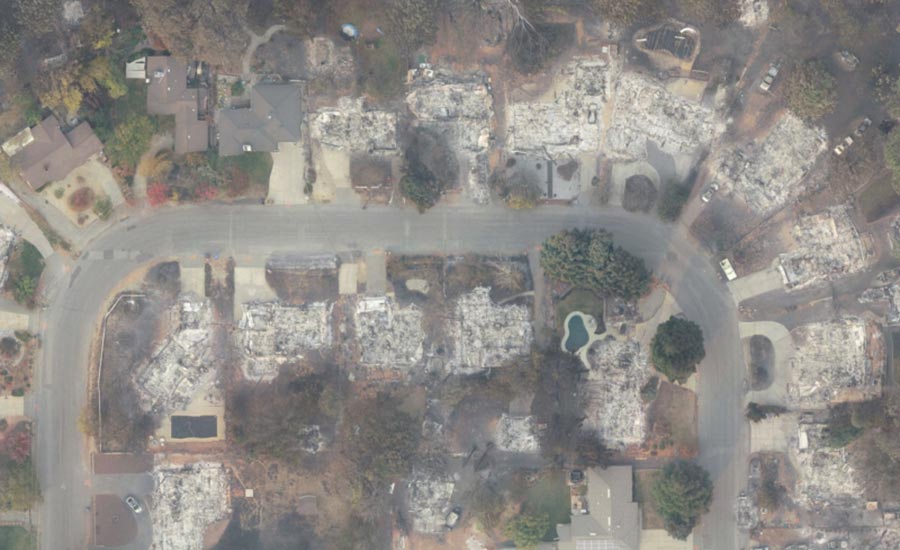 Images like this helped insurance companies identify homes completely destroyed by the fire.

For smaller restoration companies, investing in a drone and the accompanying training and licensure can be costly. But software like this is still completely accessible and useable for smaller companies who can also access DroneDeploy’s network of drone pilots around the country.

It was through networks like these that drones helped first responders, and ultimately restoration companies, get a leg up on response to last year’s deadly Camp Fire.

Drones in Use: The Camp Fire

“When the Camp Fire happened, about 15 local agencies banded together to see if they could help with the issue,” Millin explained. “We got a call on a Saturday evening, after the agencies received FAA approval, and they asked for our help with data collection and analysis. That’s when we made the software available to everyone in field – and all the flight planning was done inside the software.”

With drone pilots spread out across the miles and miles of land affected by the fire, which was not yet fully contained, agencies were able to use the software to create a mosaic patchwork of flight plans to crisscross the entire region. 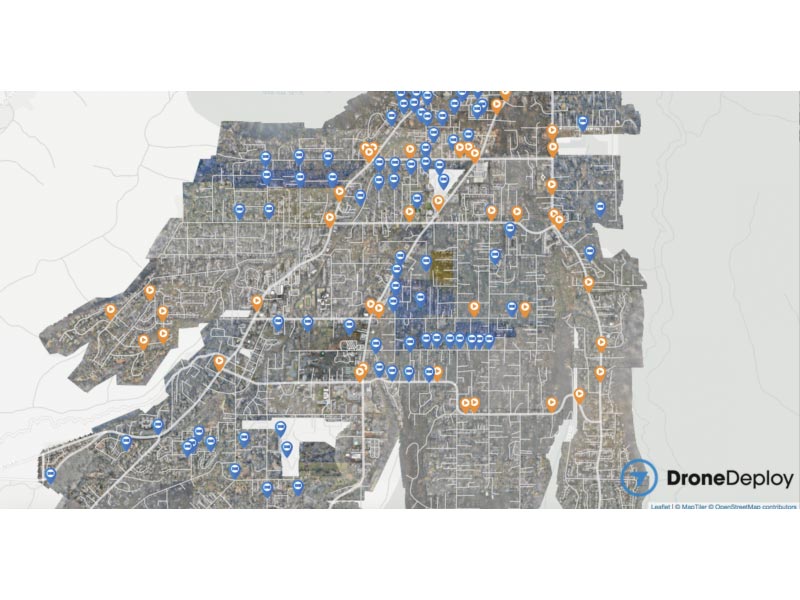 Over three days, police, fire, and rescue personnel worked day and night to complete more than 500 drone flights and capture 70,000 images, totaling more than 1.4 trillion pixels. All the data was then compiled from SD cards, where cloud connections weren’t available, taken to the DroneDeploy team in San Francisco, and turned into 26.5 square miles of high-res aerial maps.

“Within 24 hours, the data had been imported and processed. The images helped first responders triage their response efforts using actual concrete data of the whole valley,” Millin said. “They were able to zoom all the way down to see individual bricks on structures, and what houses were standing and which were gone.”

The images also helped them see where the ground might be unstable and susceptible to mudslides. 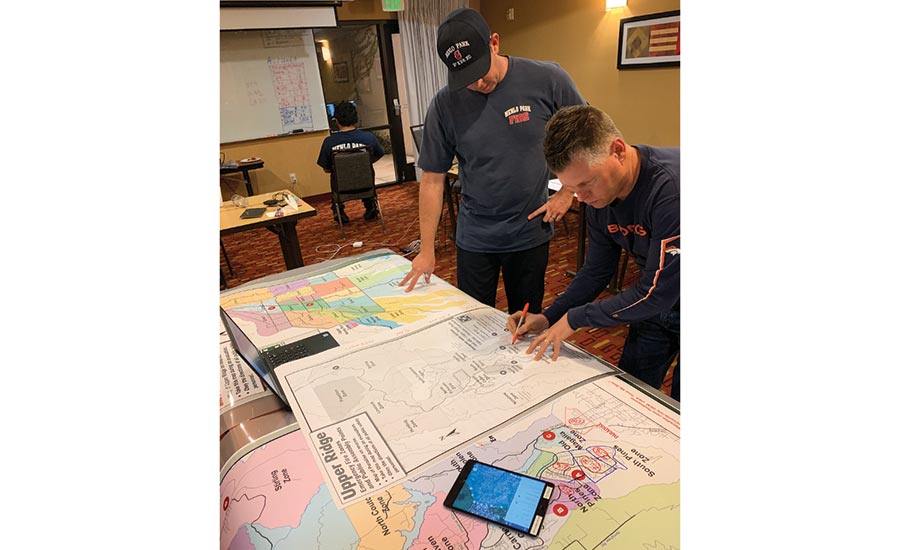 In addition to helping first responders, the drone images were very helpful for homeowners needing to file claims. Because much of the area was still closed at this point, and people couldn’t see for sure if their homes were still standing or not, DroneDeploy found a way to safely release necessary data to the public. Through this, homeowners, insurance carriers, and FEMA had proof of properties destroyed to get the claims process rolling.

Millin said the Camp Fire is just the tip of the iceberg in how drones can help in disaster situations. The fact that drones can fly under the weather – such as smoke from fires or clouds from hurricanes – opens the door for more accurate disaster scoping, sooner.

Consultants Are Not the Enemy of Restorers

Why Restoration Contractors Should Be Alpha Marketers