Before he became a licensed mold inspector/assessor in 2006, Brent Horton, owner of Mold and Air Inspection in Boiling Springs, S.C., sold indoor air purification equipment. Often, when calling on customers, he kept running into questions from many of them about mold.

It was a class for mold inspectors put on by the National Organization of Remediators and Mold Inspectors (NORMI) that first had Horton considering becoming an inspector.

“My wife kept getting sick. Using air purifiers helped tremendously. But then we wondered what was making her sick,” he recalls.

“We found out it was mold. From that point on I was in the mold inspection business.”

When Horton first enters a home or commercial property he begins by asking his customer lots of questions and carefully listening to their responses and concerns. Afterward, he conducts a thorough visual inspection of the property including any troublesome areas customers point out and uses his nose to detect the musty smell of mold.

“People don’t want to smell the mold, so they perfume their house to where you can’t smell anything. That makes it hard for me to detect its presence. But even if I don’t smell mold directly, those perfumes are often a giveaway that they’re trying to mask the smell,” Horton says. 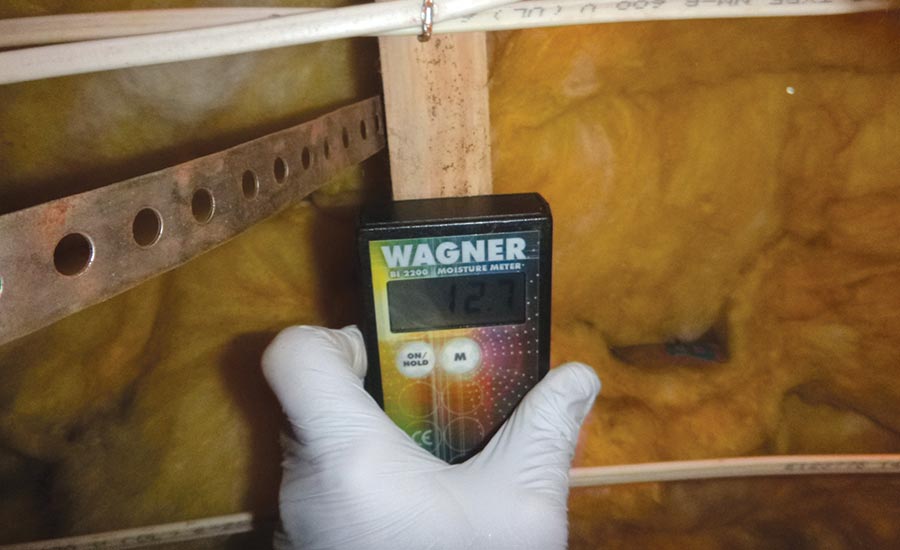 If not perfuming the odor, some homeowners open the windows in the fall or spring to bring in fresh air. That doesn’t help him either because, as he exclaims, “I’m not there to inspect the outside air.”

Another challenge for Horton is that sometimes homeowners scrub the house clean.

“They bring you in and tell me they’ve got a mold problem and want me to find it. Well, they cleaned up all signs of mold. The Pine-Sol or Lysol they used overwhelms my senses, so I can’t smell mold. They may have also used bleach which bleaches the color out of mold. Or, they scrubbed or repainted the ceilings.

“I need to see the mold or know what a house smells like to help me identify a mold problem,” he adds.

If mold is an issue, he looks for past or present moisture-related problems that could possibly have triggered mold growth. Mold, he notes, can be found outdoors and indoors.

Almost everything in a home or building is food for mold – sheetrock, 2x4s, plywood, carpeting, wallpaper, and other organic materials.

Moisture, along with high humidity and warm temperatures, triggers mold growth. It can come from flooding, a broken pipe, a roof leak, or other types of moisture intrusion.

Once moisture intrusion occurs, Horton says it only takes 24 to 72 hours before mold starts growing. Some mold species will grow after only 12 hours.

“That’s why it’s imperative to get somebody on site as quickly as water intrusion happens,” he said.

Often moisture intrusion is more subtle and undetected for a length of time. For instance, water coming in from a foundation can be covered up by carpet or tile. Or, cracked tiles in showers can cause moisture issues behind a bathroom wall.

“People tend to overlook maintenance in showers or bathtubs where you have cracked or missing grout. You could have trouble behind the walls. Or, a plumber may at some point failed to properly fit pipes together. I’ve had fittings pulled loose in a shower and it sprayed inside the walls. Once that happens you’re going to have moisture and mold problems,” he says.

Horton adds, “If there’s high moisture content in a home, humidity over 60%, and a temperature of 70 degrees Fahrenheit or more, mold can grow. If construction materials have over 17% moisture content, mold can attach itself and start growing. That’s why a moisture meter is imperative in the mold business.”

Humidity can originate from several sources, including faulty air conditioning that fails to remove indoor moisture. Horton uses monitors to check for humidity and temperature, and indoor air quality. Ideally, humidity in a home should be between 30 and 50 percent.

After a thorough visual inspection, Horton, a certified thermographer, scans the property with an infrared camera. He looks for temperature differences caused by moisture. Wherever there’s moisture, there’s evaporation. Evaporation causes cool spots.

“Finding a cool spot, however, doesn’t always mean moisture caused it,” he explains. “It might be caused by the absence of insulation, for instance. That’s why a moisture meter is imperative. It verifies the presence of moisture,” he says. 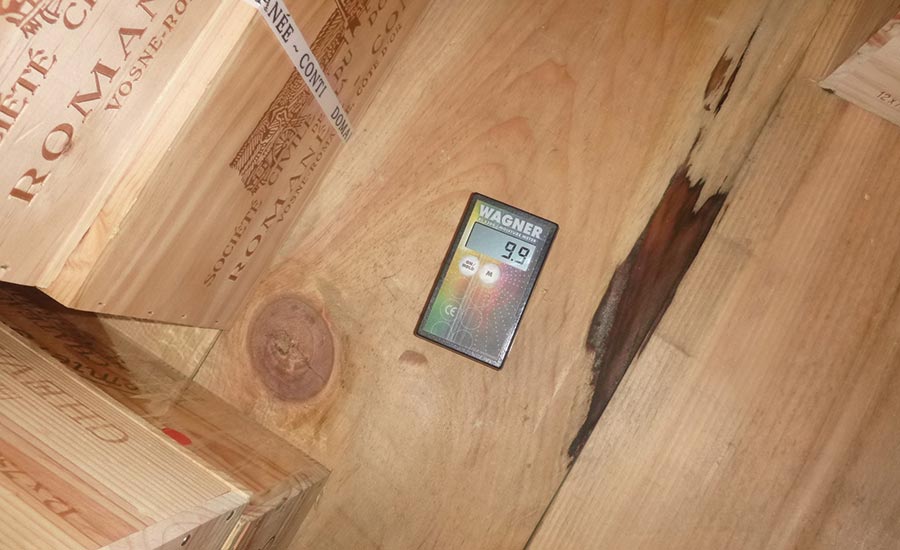 “Because it’s pinless I’m not punching holes in the wood or walls with it. If I’m working in a million-dollar home and I’m poking holes in the baseboard or wood paneling, momma’s not a happy camper.”

When he wants to measure moisture on trim mold around a window, however, or an irregular surface, he then uses a pin meter.

“That’s the only time I pull out the pin moisture meter. But I’m not as confident with the pin meter and the way it works as I am with the pinless meter. Compared with other instruments, the BI2200 is probably one of the most reliable pieces of equipment I carry in my bag,” he remarks.

When Horton inspects homes with a basement – both old and new homes – he often finds moisture issues. A common telltale sign of moisture is efflorescence, which is simply an accumulation of minerals and salts from water that’s left on masonry surfaces, such as cinder block, brick, cement, and sometimes stone.

While efflorescence in itself is not a problem, it indicates the possible presence of excess water in the masonry that can originate from rain, sprinklers, household leaks, or any number of other places. This excess water can lead to more serious structural and health issues, including the growth of mold.

As a skilled inspector, Horton always notes the presence of efflorescence in his inspection reports because it generally occurs where there is excess moisture.

He also inspects the foundation for signs of moisture intrusion.

Moisture in homes with crawlspaces – the space between the dirt itself and the first level flooring – can also be a problem. In coastal areas of the U.S., many homes are built over closed crawlspaces. That’s because the water table is often high. In fact, roughly 70% of the new homes in South Carolina are built on crawlspaces. 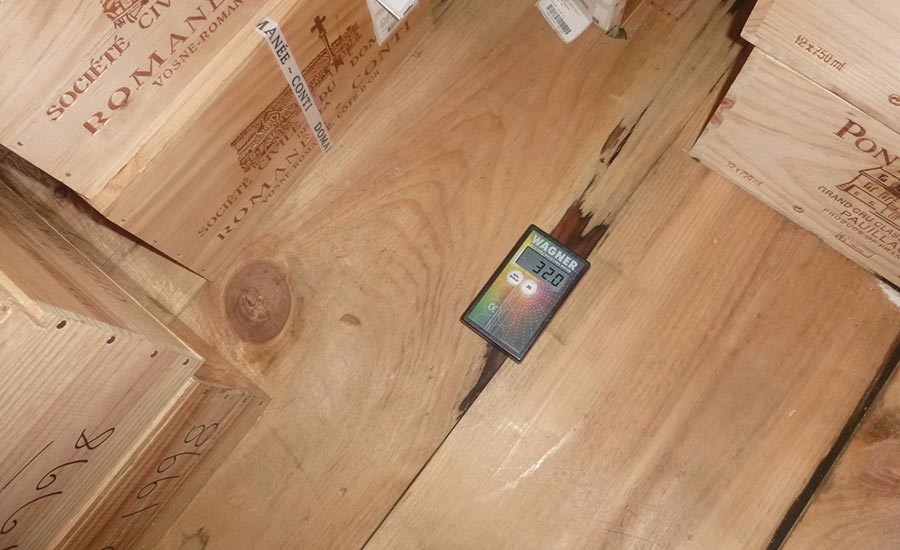 Any place where there’s very high outside humidity during the summer, ventilating the crawlspace can bring more moisture into the space than it removes. “What happens is you’re drawing in that warm moist air from the outside into a cool area where it’s going to condensate moisture. So you actually make the problem worse and encourage mold to grow,” Horton notes.

And, in those areas where the water table is within three feet of ground level, soil evaporation can also contribute considerable moisture into the crawlspace.