Use science to eliminate odors at the source.

Even for pros, odor elimination can be a tough challenge with lots of variables. The wide variety of odor sources along with the subjective nature of what constitutes “bad” odor can complicate the process of diagnosis, treatment and evaluation of efficacy. Now, advances in the technology of producing and applying Chlorine Dioxide (ClO2) have made odor elimination more effective and predictable than ever before. And some restoration pros are discovering that ClO2 expands their capabilities and opens all new profit opportunities. It’s the first true advance in odor elimination technology in decades.

For nearly 75 years, ClO2 has been widely accepted as the preferred deodorization and disinfection solution for large scale projects such as municipal water treatment.  Recent technological advances have made it cost effective to produce ClO2 for restoration jobs of any scale. This advance has paved the way to the discovery of ClO2 as a powerful new way to eliminate a wide variety of odor types.

The Science Behind ClO2 and Odor Control

ClO2 eliminates odors via a process called oxidation.  More accurately, ClO2 works in a chemical reaction that involves the transfer of electrons between molecules and/or atoms.  We all know what skunk spray smells like – that odor is generally known as a mercapton.  ClO2 steals electrons from the mercapton molelcule.  Actually, changing the composition of the molecule so that it no longer smells.  It does the same for smoke odor left after a fire.

ClO2 is SMALL!  Why does that matter?  Small odor molecules, like smoke from natural materials (roughly 0.1 micron) can easily embed into surfaces making their removal very difficult.  ClO2 is 100x smaller than a smoke molecule.  Another way of saying this, is that 80-100 ClO2 molecules could fit in a smoke molecule!  This makes ClO2 the perfect option to oxidize the smoke residual leaving an odor free environment with no residue. 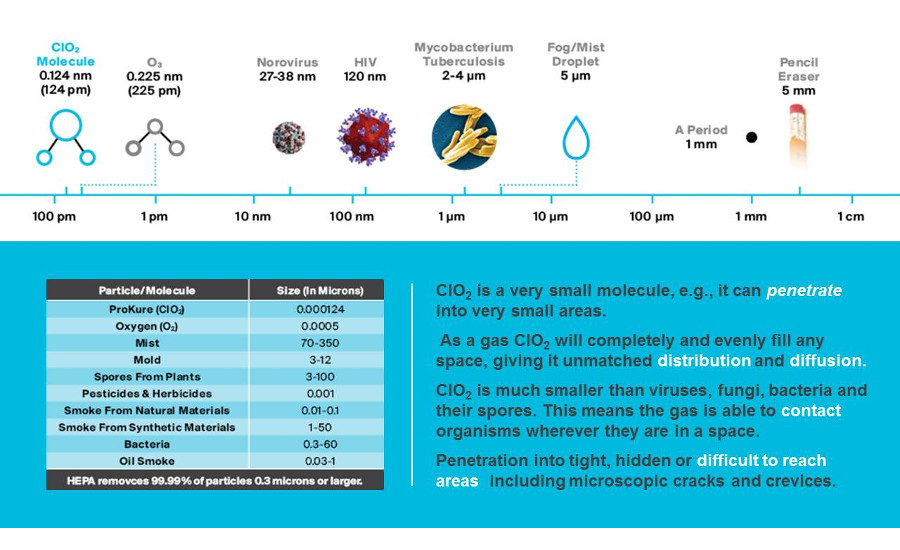 The Small Size of ClO2 Allows Penetration to Areas that Harbor Malodors.

Since ClO2 can be produced in both liquid and gas form, it is flexible to use on a wide variety of odor challenges. Liquid-form ClO2 is sprayed directly onto to affected areas with an electric sprayer to soak the offending molecules. Gas-form ClO2 reaches into hidden nooks and hard-to-reach areas (such as crawl spaces and attics) to eliminate unseen odor-causing elements.

At my company, ProKure1, we believe the professional restoration industry has so far just scratched the surface in discovering how ClO2 can help complete a wider range of jobs, more profitably. We encourage pros who are interested in expanding their capabilities or in staying on the leading edge of odor elimination tech, to test ClO2 for themselves.

Here’s a real-life example of ClO2 in action. The devastating Thomas Fire in and around Santa Barbara was the largest blaze in California history.  This fire was different from past fires in that it affected a larger amount of commercial properties, including a well-known local school campus with multiple dorm rooms.

“The scope and scale of the loss was overwhelming” said Pete Miko, a restoration equipment professional with over 25 years’ experience in the industry and a long-time resident of Santa Barbara.  ClO2 was the perfect solution, given the size of the job, because it: eliminates odors quickly, scales-up for large size jobs, work with limited power and available equipment (air movers); and leaves no harmful residue.

Miko used the ProKure1 System to produce ClO2 liquid and gas. First, ClO2 liquid was applied directly onto all surfaces impacted by the fire.  Next, ClO2 gas units were deployed throughout the resort allowing for 100 rooms to be deodorized daily.

With traditional methods and products, the job could have taken months and cost hundreds of thousands of dollars in labor, cleaning and deodorizing equipment costs. Instead it was completed in hours at a fraction of the expense.

Miko summed up his feelings about the performance of ClO2: “It was amazing!”

Dr. Bernie Lorenz is the Chief Science Office for ProKure1, a leading company in ClO2-based disinfection and deodorization that currently serves pros in the fields of restoration, real estate and others. Bernie lives in Phoenix, AZ with his family and fly fishes whenever possible.

Odor Removal: The Growth of Cannabis

Odor Control: Everything You Need to Know

The History of Meth & Future of Decontamination

The Wonderful World of Containment

Emotional Discounting in the Restoration Industry

Ask Annissa: Do You Charge Separately for Contents Pack-Back and Reset?

Check out the February 2021 edition of Restoration and Remediation, featuring 7 tips on what you want to get from an M&A deal. Plus, we discuss containment, loss site safety during a pandemic, restoration flashing costs to consider and much more!