The Toughest Hoards I Have Ever Faced

In 2005, I was a police officer serving on the Kansas City Police Department. While on the site of a homicide, the family asked me when the cleaning crew was going to arrive. I explained to the family that those services were handled by private companies and are not dispatched by the city. I could see that they were distraught, so I decided to stay behind to clean up the scene myself.

This moment sparked a new passion for me, remediating properties from dangerous situations. Pretty quickly after that, I founded Spaulding Decon. In 2016, I transitioned Spaulding Decon into a franchise model that now has over 50 locations. In the 15-plus years since cleaning that first crime scene, I have added a variety of different cleaning verticals to our service offerings. The most challenging of these additions might be hoarding.

The jobs are always unique, and as varied as the stories of the homeowners. Being able to combat the ravages of a hoarding situation and return the home back to its previous glory fills me with a tremendous amount of satisfaction. The tougher the challenge, the bigger the reward and I have faced some tough ones.

Most recently, we did a cat hoard with 29 cats. It was a singlewide mobile home with typical wood subfloor. The feces and urine were so heavy that the floor was disintegrating. The client would not let us do a normal rehab or cleanup, so we literally had to scrape the feces off the floor. It had been there so long that it had hardened into a concrete-like substance. We rehydrated the feces, which turned it into diarrhea. The ammonia smell was so intense that you couldn’t go near the home without a respirator. The furniture was collapsing because the urine had damaged the bottoms.

The client insisted that we not remove anything from the home other than feces. It was the most difficult job ever because we felt like we were half completing it as we were just taking the top layer. The bathtub was full of cat feces, so she wasn’t showering and was waking barefoot in the home. She insisted on keeping her mattress, which was dripping with cat urine. We were able to remove all the feces and clean up the urine. I wish we were allowed to do more, but at least she can get back to living in a safe home. 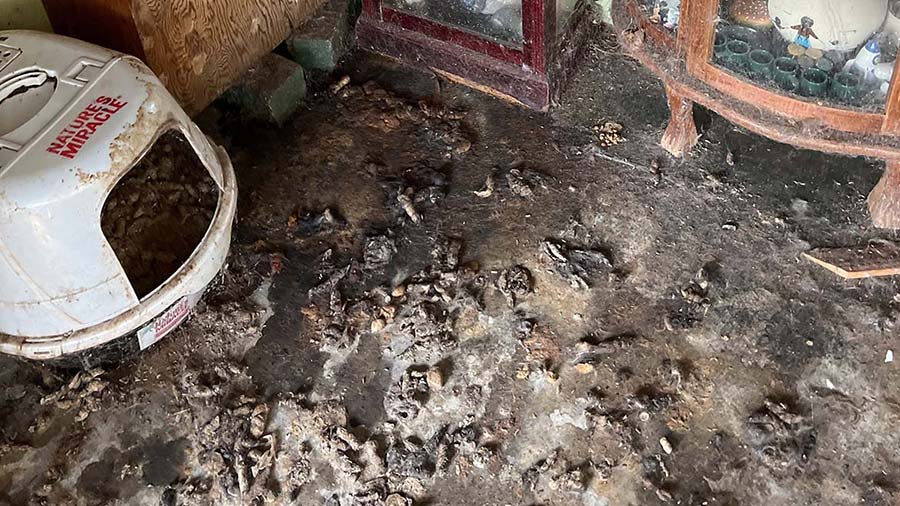 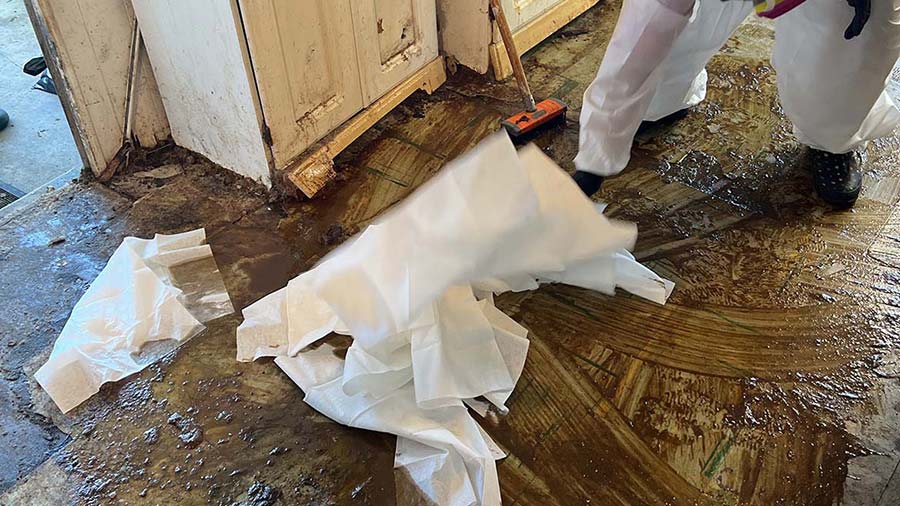 A Hoard That Took Four Years to Complete

Another challenging hoard was a small, 1,200-square-foot house that took us several weeks to clean out. When I first visited the home, it was at the request of the hoarder’s daughter. The house was located in a prime neighborhood and the client had grown up there. For the initial appraisal, the hoarder insisted upon meeting us both outside. This is normal for hoarders; they are often uneasy about letting people into their home. While standing outside, the hoarder quizzed me. I got the feeling that she was trying to determine whether I had empathy for her. After a few minutes of this, the daughter grew impatient and started to berate the mom, insisting upon her letting us inside. The daughter’s actions made the situation very uncomfortable, and the mom ultimately relented. When she finally opened the door, there was no light; the windows had all been covered by sheets. All I could see was a very narrow tunnel and items stacked to the ceiling.

I walked through and was able to make it to a bedroom in the back. She said the water hadn’t been on in years and she had resorted to using buckets instead of her toilet. The smell wasn’t as bad as I thought it would be, but the sheer volume of items was overwhelming. The hoarder was extremely nice, and I remember her fondly to this day. The daughter hired us and strong-armed her mother to agree to it. The daughter made it clear that she didn’t want to deal with it when her mother passed away.

To get started, we had a dumpster delivered and started work around 8 a.m. At the beginning of the process, the hoarder opened the back door and we prepared to begin removing the hoarded items. She made it clear that she wanted to decide what was to be kept. I grabbed the closest item to me, and she said keep it. I grabbed another one and she said keep again. I knew it was going to be difficult, but I didn’t think she would do what happened next. I grabbed a third item, and her anxiety overcame her. She told us to leave. The hoarder and her daughter began to argue and the job was done.

We were only there for 10 minutes. Four years later, the hoarder was taken to an assisted living facility. Her daughter called us and had us take everything and throw it away. It took a couple of weeks to get through it all. Sadly, she passed away a couple of years ago. She was the nicest client and had one of the best personalities I’ve encountered.

The third hoard on my list of toughest hoards makes the list due to the sheer volume of items squeezed into a two-bedroom condominium. When we arrived, it was hoarded from the floor to the ceiling. The only area to move around was a small pathway carved out from the front door to a recliner. The occupant could not even get to her bedroom. The client was moving into an independent living facility, and we told her she was not going to be able to fit everything and would need to downsize. She was hoarding books, furniture, food, clothing and overbuying on Amazon. Through the course of conversation, she mentioned that she also had a 2,000-square-foot home that was paid off and severely hoarded. She moved out of that home and into the condominium because she fell and was worried they’d find her body in there.

So, a fully hoarded condominium, a fully hoarded home. That must be it, right? Wrong. We discovered that she said she also had 10 storage units full to capacity that she had been paying for years. One home, one condominium and 10 storage units. This was a gigantic job. I worked with her to determine her keep items from the main house and her condominium. I encouraged her to let the storage units go. She had been paying for them so long she could have bought everything in those units 10 times over. We ultimately worked out a deal where I bought her home as-is and cleaned everything out. It was a win-win situation.

Being a hoarder cleaner is not for the faint of heart. We are faced with challenges that are not just physical but also emotional. We often are seeing people at their most vulnerable. However, those challenges pale in comparison to the satisfaction I receive from being able to help someone reclaim their property and their lives. Every time I go to work, I get a chance to make a positive impact on someone’s life. I would not trade the ability to make the world a little brighter for someone for any other job. Laura Spaulding is the founder and CEO of Spaulding Decon, a biohazardous cleaning franchise specializing in crime scene and hoarding cleaning with over 50 locations.

The One Goal Every Restoration Business Owner Should Have for 2022