This website requires certain cookies to work and uses other cookies to help you have the best experience. By visiting this website, certain cookies have already been set, which you may delete and block. By closing this message or continuing to use our site, you agree to the use of cookies. Visit our updated privacy and cookie policy to learn more.
Home » Dioxins: The Most Hazardous Substance In Structure Fire Environments - Part 2
Fire and Smoke Damage RestorationRestoration Zone

Dioxins: The Most Hazardous Substance In Structure Fire Environments - Part 2

To better understand how toxic TCDD is, one needs to understand how it and other toxins are measured. In toxicology, the median lethal dose is identified as LD50 (abbreviation for “lethal dose, 50%”). LC50 is the abbreviation of lethal concentration, 50%. These are used to measure the lethal dose of a toxin, radiation, or pathogen.  The value of LD50 for a substance is the dose required to kill half the members of a tested population after a specified amount of time. LD50 figures are often used as a general indicator of a substance’s acute toxicity. 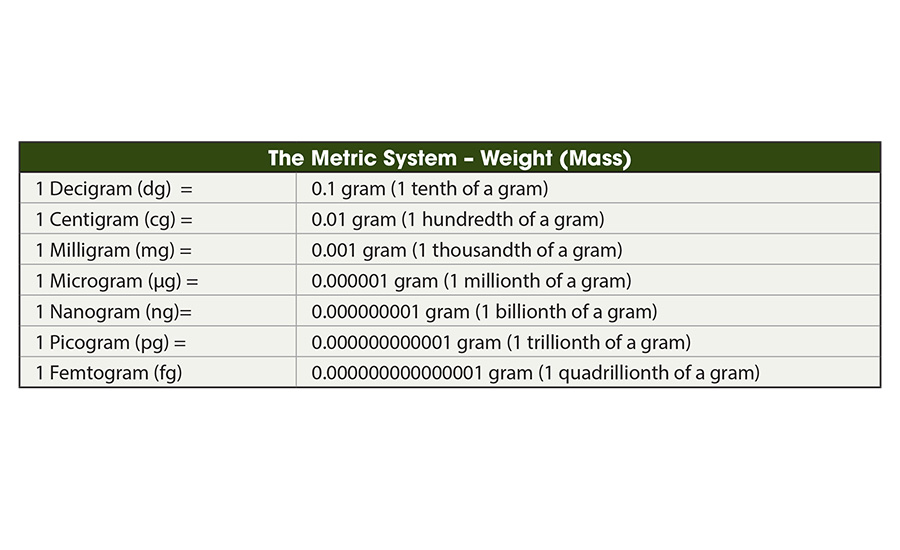 In 1989, the Agency for Toxic Substances and Disease Registry (ATSDR), toxicological profile for 2,3,7,8-tetrachlorodibenzo-p-dioxin report stated “Both the Centers for Disease Control and the Food and Drug Administration have calculated a virtual safe dose for 2,3,7,8-TCDD, which corresponds to an excess cancer risk of 10-6 . Thus, human intake values that correspond to an estimated 10-6 risk derived by EPA, CDC, and FDA, respectively are 6.4, 27.6, and 57.2 fg/kg/day.” The abbreviation “fg” represents femtograms, or quadrillionths of a gram.

Barry Commoner, professor of plant physiology at Washington University, stated that “Many toxic chemicals are linked with a specific illness, such as lead and brain damage, or asbestos and mesothelioma. Others are linked with several illnesses. Dioxin is tied to such a large number of diseases because it is a cancer-enhancer. Dioxins intensify cancers which other toxins begin. They greatly enhance the activity of the enzyme system that converts most environmental carcinogens into active agents. Dioxin can stimulate the enzyme so powerfully that it sharply increases the activity of the small amounts of carcinogens present in food, water, and air, thereby intensifying their effect on tumor incidence. In effect, dioxin influences tumor production by enhancing the activity of carcinogens. This is why dioxin has different effects on different people. For example, if a group of workers has already been exposed to chemicals which cause Hodgkin’s disease, dioxin will speed up the process and they will have an increased rate of Hodgkin’s disease progression. The human body tends to store dioxin in fatty tissue, and when people take in dioxin through food or air, it ends up stored inside of their cells.”

Polyvinyl Chloride (PVC) is the world’s third-most widely produced synthetic plastic polymer, after polyethylene and polypropylene. About 40 million tons are manufactured per year, with China being the largest producer. Approximately 70% of PVC is used in building and construction applications.  Polyvinyl chloride (PVC) contains toxic heavy metals including lead, mercury, and cadmium. If a product is made with PVC, there will typically be a triangular “chasing arrows” symbol with a number 3 in the center stamped on it.

When burned, PVC plastic forms dioxins, and a host of other toxic byproducts. PVC is used to manufacture: 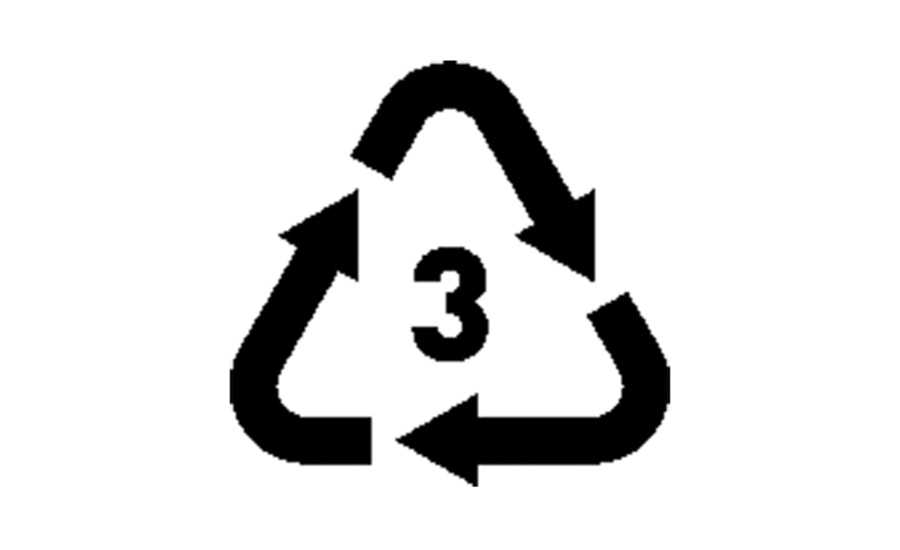 The EPA published a study where they measured the quantity of many various chemicals in the smoke from burn barrels (55-gallon drums used to dispose of household waste in rural areas). For some of those chemicals, burning about 10 pounds of trash per day in a burn barrel can produce as much air pollution as a modern, well-controlled incinerator burning 400,000 pounds of trash a day.  Burning 1 kilogram (2.20 pounds) of wood alone produces as much as 160 micrograms of dioxins. One can imagine how much TCDD is produced in a structure fire or wildfire where tons of building and household products may combust. 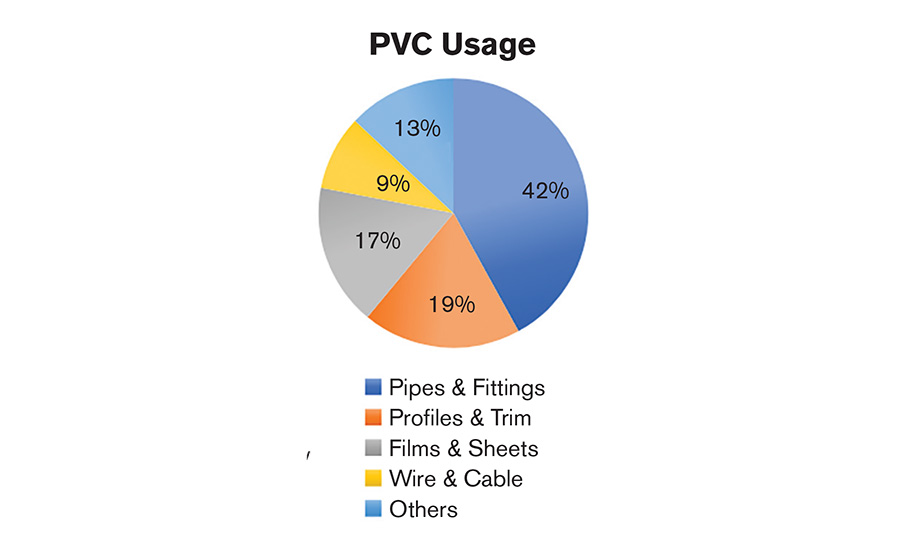 Safety Standards for the Restoration Industry 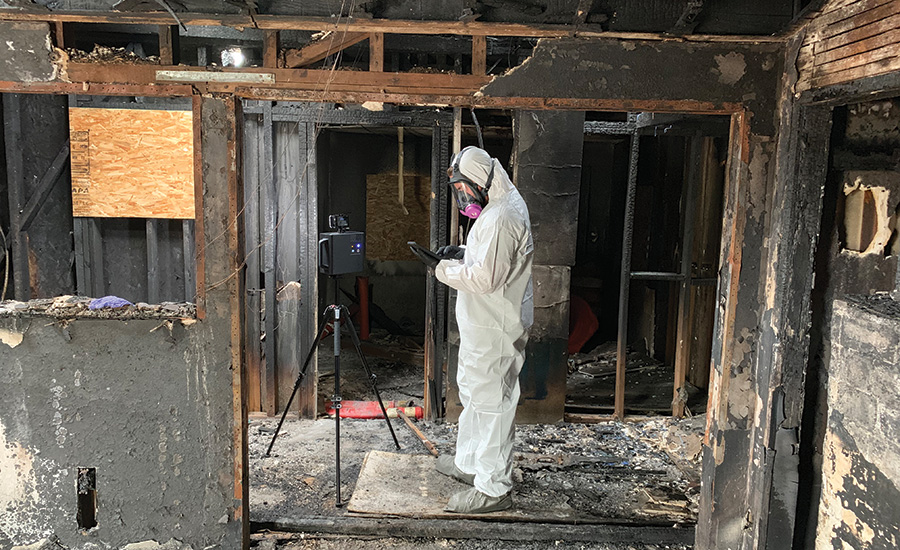 The Occupational Safety and Health Administration (OSHA) states that a hazardous substance is “any biological agent and other disease-causing agent which after release into the environment and upon exposure, ingestion, inhalation, or assimilation into any person...will or may reasonably be anticipated to cause death, disease, behavioral abnormalities, cancer, genetic mutation, physiological malfunctions...or physiological deformations in such persons or their offspring.”

In a structure fire environment, a respiratory hazard exists when a toxic contaminant is present in the air at a dangerous concentration. The damage may occur immediately, or it may take days, weeks, or even years for effects to surface.

The National Institute for Occupational Safety and Health (NIOSH) states: “Workers may be exposed to TCDD derived from a variety of sources. The first step in assessing workplace contamination should be environmental sampling to determine the presence of TCDD contamination, keeping in mind the possible routes of exposure (inhalation, absorption, and ingestion), with later sampling conducted to define the quantity of TCDD in the environment. The assessment may include sampling of soil and settled dust for TCDD, air sampling for TCDD-contaminated particles, and wipe sampling of surfaces.” 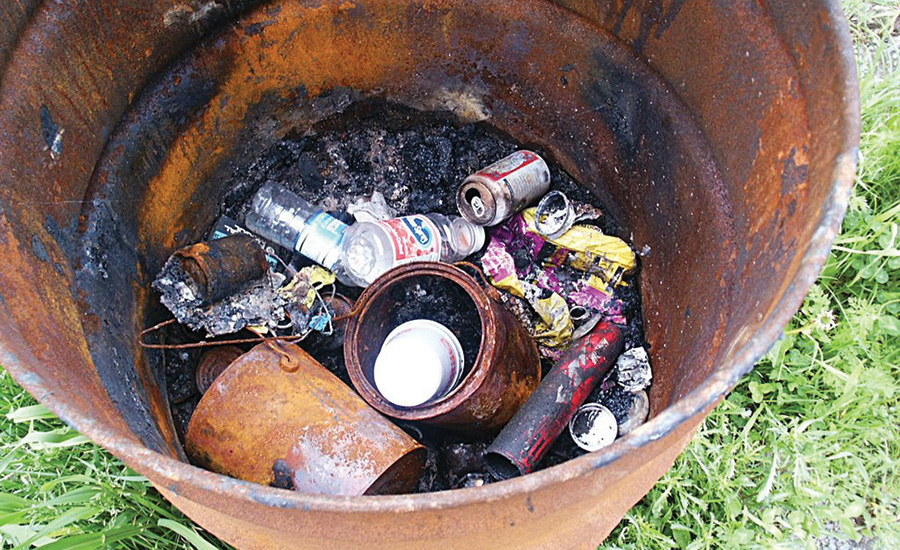 “All workers who may be exposed to TCDD should be equipped with adequate chemical protective clothing and equipment to ensure their protection. In the selection of protective clothing, consideration should be given to the utilization of disposable apparel due to the uncertainty of decontamination of clothing. The protective apparel should consist of both outer and inner garments. The outer garments should consist of a zippered coverall with attached hood and draw string or elastic sleeves, gloves and closure boots. If exposure is to particulate or dust, the coveralls should be made of a non-woven fabric such as spunbonded polyethylene, Tyvek®.

“Where quantities of materials highly contaminated with TCDD have been released and have contaminated an area, all workers who may be exposed to TCDD should wear respirators that consist of a self-contained breathing apparatus with a full facepiece operated in pressure-demand or other positive pressure mode. An alternate method utilizes a combination Type C supplied air respirator, with full facepiece, operated in pressure-demand mode and equipped with auxiliary positive pressure self-contained air supply.” 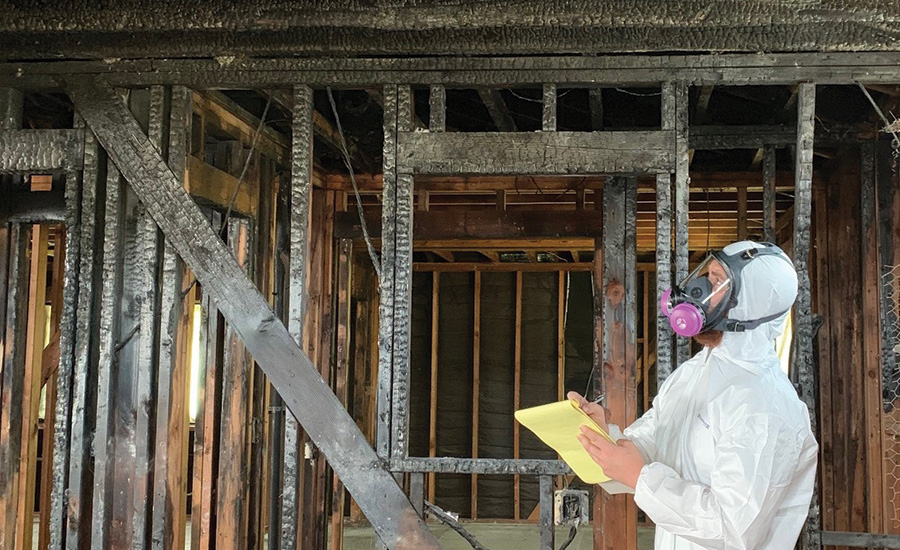 Multiple credible organizations have studied and published definitions of values and limits regarding human exposure to the various compounds in post-fire environments.

The three organizations considered to be authorities on this topic are NIOSH, OSHA, and the American Conference of Governmental Industrial Hygienists (ACGIH). NIOSH defines an Immediately dangerous to life or health (IDLH) atmosphere as “an atmospheric concentration of any toxic, corrosive or asphyxiant substance that poses an immediate threat to life or would cause irreversible or delayed adverse health effects or would interfere with an individual’s ability to escape from a dangerous atmosphere.”

OSHA has also determined a limit known as a Permissible Exposure Limit (PEL). A PEL is defined as “the maximum concentration to which the majority of healthy adults can be exposed over a 40-hour workweek without suffering adverse effects…An OSHA PEL (C) is a PEL ceiling limit and this is the maximum concentration that a person can be exposed to at any time, even for an instant.” Keep in mind that TCDD does not have a PEL or PEL (C).

The American Conference of Governmental Industrial Hygienists (ACGIH) has established Threshold Limit Values (TLVs ®) and Biological Exposure Indices (BEIs®). The TLV®, as defined by ACGIH, is an occupational exposure value recommendation which is believed nearly all workers can be exposed day after day for a working lifetime without

ill effect. No occupational exposure limits for TCDD were found in Canada or the ACGIH threshold limit value (TLV®).  Without comprehensive testing and sampling, there is no way to predetermine hazardous conditions or concentrations of TCDD, especially in a fire environment. 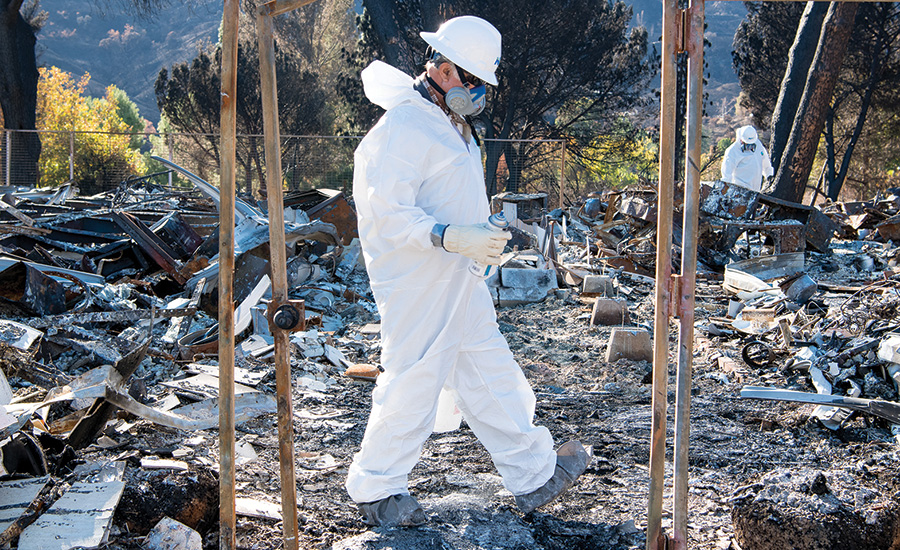 The term “hazardous material” is defined by OSHA in the Code of Federal Regulations Title 29 Section 1910.1200 as being any item or chemical which is a “health hazard” or “physical hazard”, including:

Given the extreme toxicity of TCDD and the vast array of other toxic substances, VOC’s, chemicals, and particulate matter in structure fire settings, it could be argued that only those with Hazardous Waste Operations and Emergency Response (HAZWOPER) certifications should be allowed to enter or perform remediation, demolition, or cleanup work in post-fire environments.  Furthermore, most, if not all structure fire settings will have significant amounts of TCDD resulting from the combustion of chlorinated products such as PVC, paper, household chemicals, and other materials. Since federally regulated toxic substances such as lead, mercury, and asbestos pale in comparison to the toxicity of TCDD, restoration practitioners need to inform their employees and clients of the health risks of exposure to TCDD. 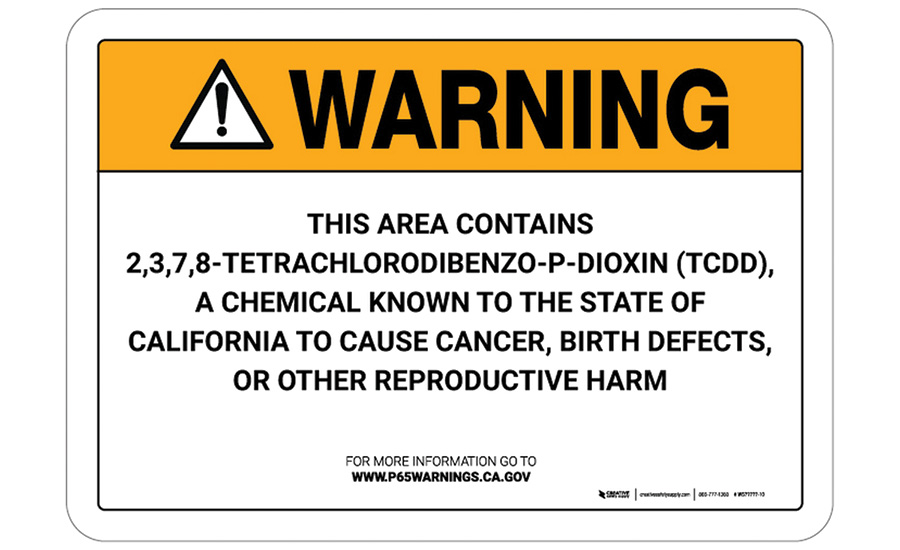 NIOSH states: “The adequacy of the decontamination effort should be determined by conducting follow-up sampling and analysis of the contaminated areas and protective equipment. This testing should be conducted as each area is decontaminated and after the entire facility has been cleaned”.  This would hold true especially in post-structure fire environments and is a crucial step to safeguard workers as well as occupants who may enter a potentially contaminated area or structure.

Since TCDD is a far greater health concern than asbestos, lead, mercury, or mold, comprehensive testing in post-structure fire environments should be mandatory. How else can restoration practitioners properly protect their employees or take appropriate measures to remediate TCDD and restore buildings or homes to their pre-loss condition? In most cases, the chemicals and gases created by the burning of everyday common household products and building materials create some of the most toxic chemicals known to man.

TCDD has no permissible exposure limit, is far more toxic than any other commonly found substance, and causes a vast array of health risks not only to those exposed, but potentially to future generations as well. For these reasons, strict rules designed to protect the health of workers and occupants should be implemented for restoration or remediation work. At a minimum, OSHA guidelines for lead under Regulation 1926.62, found at https://www.osha.gov/laws-regs/regulations/standardnumber/1926/1926.62, should be followed.

Each year, new materials and chemicals are being created and introduced to consumers in the form of building materials and household products. Many of these substances will undoubtedly create vast arrays of known and unknown toxic substances when burned.  Fire restoration practitioners need to know what is restorable and what is not before attempts are made or money is spent on restoration efforts. Restorers also need to realize that certain materials contaminated by toxic substances in structure fire smoke, such as TCDD, simply cannot be cleaned.

Briana has worked with her Father Sean Scott for over 6 years and focuses her writing and research skills on helping disaster survivors recover from disaster events and empowering them with the resources and information they need to rebuild their lives. Sean Scott has over 41 years’ experience in the restoration and construction industry and has published numerous books, papers and articles including Secrets of The Insurance Game and The Red Guide to Recovery – Resource Handbook for Disaster Survivors. If you have any questions, would like to inquire about training or would like to speak to Mr. Scott, feel free to contact him at 858-453-6767 or email info@championconstructioninc.com.

The Hiring Challenge and What Must Be Done

‘A Very Major Event’: Next Gear Solutions Acquired By CoreLogic