Cross Examination: The State of California Wages War Against Contractors

Disclaimer: This article is intended for general information purposes and is not intended to be legal advice. Legal issues should be presented to qualified counsel licensed to practice law in the jurisdiction where the events occurred.

When I was 18, I got my first car: a 1968 Chevelle Malibu, a classic muscle car with a big throaty engine. I painted it black, put on racing wheels, big wide tires and Gabriel Hijackers. I got so many speeding tickets, my home state of California sent me a letter ordering me to appear at a hearing and politely notifying me that my right to operate a motor vehicle was going to be revoked for six months.

I appeared at the hearing with my employer, who, unbeknownst to them, just happened to be my stepfather. He told them I drove 10,000 miles a year for my job as a real estate photographer (which I did when the sun was up in order to support my music habit when the sun was down).

After reprimanding me for 15 minutes and calling me “an accident looking for a place to happen,” they let me keep my license and I drove away. That didn’t make me any less of a menace to motorists and other pedestrians, but it allowed me to continue the escapades of my misspent youth on the streets of Hollywood. For that, I was grateful.

The point is that they took into account the relative infrequency of my violations, considering the volume of my driving. Do you think contractors get the same “volume” consideration when they’re accused of violating a license law? Guess again. They will be happy to put you out of business for one infraction, even if the alleged defective workmanship was not directly your fault, and even if you have a squeaky-clean record.

Having been involved in various aspects of the California construction industry for about 40 years, I am sometimes astonished at how merciless the state can be with contractors. And if you don’t have the type of license they want you to have, you too are a criminal. The California Contractor’s License Board has a Statewide Investigative Fraud Team (SWIFT) that investigates unlicensed individuals actively working on a construction project where the combined cost for labor and materials is $500 or more, as well as contractors who fail to pull a building permit for construction activities.

Building permits are required by law as a public safety measure. Permits ensure that construction is performed in compliance with state and local codes, including safety standards. In 2009, the license board voted unanimously to place a high priority on enforcing building permit requirements, and an industry bulletin was subsequently issued to alert licensees that the board would be accelerating building permit enforcement efforts, beginning January 2010.

Failure to obtain a building permit is a violation of the Contractor’s License Law. Further, construction performed without a permit can expose a homeowner to additional liability and costs. When a contractor performs improvement work without a local building permit, it is a violation of Business and Professions Code sections 7110 and 7090. Contractors who violate the law are subject to disciplinary action by the board, including civil penalty assessments of up to $5,000 per violation, an order of correction that requires payment of permit fees and any assessed penalties imposed by the local building department, and suspension or revocation of the license.

The Code of Regulations requires procurement of a permit before work begins, and many are too lax about that requirement. They concoct a host of entertaining excuses for not having a permit: “It doesn’t matter because we are not due for an inspection yet, so no harm, no foul” or “I could have obtained a permit before I was fired from the job.” The state is not impressed with those types of excuses because the violation irreversibly occurs the instant work begins on an unpermitted project.

Of all the government’s pet peeves, contracting without the proper license seems to be one of the worst. Many well-intentioned, hard-working blokes get ambushed in sting operations and hauled off in handcuffs after what they thought was a routine house call. Employees who solicit, negotiate or sign residential service contracts in California must have a Home Improvement Salesperson (HIS) license.

After the wildfires raced through Napa County California in 2017, the License Board partnered with the Napa County Sherriff’s Department and the district attorney to conduct an undercover sting operation to catch unlicensed contractors, and several of them were taken to jail. Undercover agents invited unlicensed contractors to place bids on home improvement projects for a single-family home that was nearly destroyed by the fire. The individuals who placed bids to fix damaged property faced felony charges because the penalty increases from a misdemeanor to a felony in disaster areas. Contractors face fines up to $5,000 and six months in jail for the first offense, and the penalties are more severe with each successive violation. 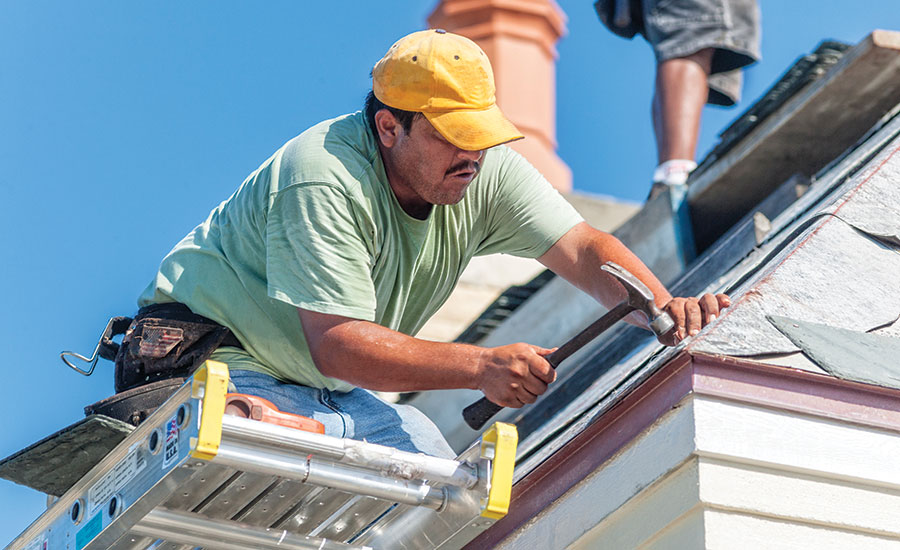 Many holders of nationally-recognized restoration franchises assume they do not need a contractor’s license because they only perform mitigation, remediation and carpet cleaning. The requirement for a license has nothing to do with whether the work is performed on an emergency basis. Any California project that involves the removal of building materials, including baseboards, cabinetry or drywall or more  requires a contractor’s license if the cost of the entire job is more than $500. On a residential job, it is a crime to collect an advance of more than $1,000 or 10% of the amount of the job, whichever is less. State law requires unlicensed contractors to note in all advertising that they are not licensed. Who does that?

It’s not only the unlicensed contractors who suffer these severe punishments. A licensed contractor with a spotless record and 25 years of satisfied customers can find himself on the receiving end of an accusation filed by the Attorney General in an effort to put him out of business if some tiles laid by his best sub are lifting on one job and the state’s construction “expert” goes hog wild and writes up a $50,000 repair estimate because he does not know how to cut tile under cabinets. So let’s rip it all out, refinish most of the interior of the house, force the contractor to pay for over-priced repairs and then put the guy out of business in the process. Then, the world will be a better place. The license board sees the expert’s report as an opportunity to put another license revocation on its list of accomplishments to justify its existence to the taxpayers. The board’s “experts” rarely, if ever, interview the contractor or listen to both sides of the story. Due process? Forget it. The experts only listen to the irate, often opportunistic homeowners, who expect contractors to make a silk purse out of a sow’s ear. Instinctively, they seem to know that the system is biased in their favor, and they take full advantage of technical flaws in an effort to get the work for free and pocket the insurance proceeds––or even make the contractor pay them. With patience, money and good legal representation, most honest contractors can stay in business after an appeal and some sleepless nights. But if they catch you in any funny business with money, it’s time to find a new line of work.

All California contractor advertisements, including the company’s name on the side of a truck, must be accompanied by the contractor’s license number. Never mind the fact the company has 99 other trucks on the road that are all compliant. It will be penalized in the same way as a small company with 100% of its trucks out of compliance, even though only 1% of the larger company’s fleet is out of compliance. The differences are significant, but to the general public, these citations look the exactly same, as they are perched prominently on World Wide Web for five long, painful years.

Most licensed contractors are honest, competent and financially responsible. But that doesn’t save them from severe, draconian punishments, particularly when doing business with a homeowner who has a victim mentality. The victim has a “poor me” attitude. You will never satisfy a victim, so stop trying. People, including you, are always against them, and are the reason for their unhappiness because the victim has never done anything wrong. Don’t let them drag you into the abyss of their endless gripes. Run for the hills, even if you need to refund a little money to keep them from going postal.

State license boards are seemingly better-funded than when the economy was really struggling. They are getting more organized and precise in their attacks and take joy in putting some decent people out of business. Of course, they get rid of a lot of bad guys too, providing a vital public service and protecting our safety. But when the focus becomes their number of “kills,” they’re not protecting anyone but themselves.

None of these risks can be eliminated entirely. Strong contracts help, but if the customer is hell-bent on going ballistic, he will make your life a Hell. Good workmanship will help you more than good contracts. But the most important key is to manage the personalities:

If you forget everything in this article, remember this one sentence: Make customers like you so they don’t report you.