A special body of law must be enacted to address the unique circumstances encountered by the emergency service industry.

Disclaimer: This article is intended for general information purposes and is not intended to be legal advice. Legal issues should be presented to qualified counsel licensed to practice law in the jurisdiction where the events occurred.

This is the story of a hard-working restorer we’ll call John. For 10 years, he poured his heart and soul into building a successful company and his work product and systems are superior to most of his competitors. He earned a contractor’s license and a CR certification. He had happy customers, a sterling reputation, and no legal problems.

At 3 a.m. one morning, John received an emergency service call from an elderly widow we’ll call Marge. Her home was flooded with sewage and she was in a panic. He was on site within 30 minutes, quickly earning her trust and giving her comfort. He explained his service and got her signature on a carefully-crafted one-page Emergency Work Authorization that he had used successfully on hundreds of jobs.

His team was extracting the sewage within an hour, and the project went off without a hitch. The authorization stated that the price of the job would be “per insurance estimate.” The adjuster paid the invoice in full. Marge signed a Certificate of Satisfaction and was delighted with the work.

Unfortunately, when Marge moved back in, she forgot she had hidden her diamond ring in a shoe box on the top shelf in her closet when the crew arrived. She accused John of stealing it. When John denied it, she filed a complaint with the contractor’s state license board. Fortunately, she found her ring and notified the board she was withdrawing her complaint, but the proverbial horse had the left the barn. The board had already opened a full-blown investigation into all of John’s work practices and legal documents. The board’s investigator concluded that even though the work was timely and properly performed, and that John did nothing dishonest, he had broken six different technical regulations he did not even know existed. He was ordered to pay $5,000 in civil penalties to the board and his contractor’s license was suspended for what he considered to be “victimless crimes.”

Under the current state of the law, the restoration industry must navigate a labyrinth of archaic laws generically written for the construction industry. These laws have no place whatsoever in the world of emergency mitigation service. They lead to disciplinary action by contractor’s license boards, unnecessary litigation, high legal expenses, and loss of productivity. The cost of all this unnecessary activity is ultimately borne by the consumer—the very party these laws were intended to protect in the first place.

For example, for residential contracts, many jurisdictions require contractors to provide the exact final price of the work stated in dollars in cents, in writing, signed by the customer before any work begins. No exception is made for emergency service. In other words, time and materials contracts are illegal in those jurisdictions (including California), and voidable at the option of the customer. The draconian result is that emergency mitigation service can only legally be performed on a lump sum contract basis. The rule protects consumers from “bait and switch” tactics by contractors who can bid jobs without the time pressure and chaos of an emergency. They have the luxury of time to perform takeoffs, calculate labor and materials requirements, and prepare a lump sum quotation. But legislatures do not realize this is a pipe dream for emergency service work, and have ignored our industry almost entirely.

The lump sum pricing mandate puts the emergency service provider in a predicament of having to choose the lesser of three evils:

Many jurisdictions require contractors to firmly commit to a specific completion date for the work in a writing signed by the customer before any work begins. This creates the same sort of dilemma as with the guesswork required to state a price, explained above. How can the restorer know if the home was damaged by 1,000 gallons of water or 10,000? 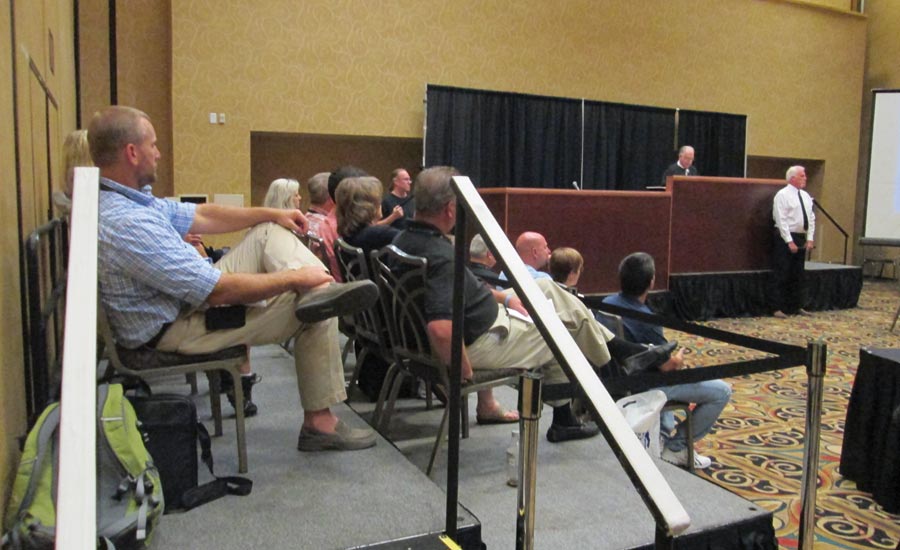 Many jurisdictions require contractors to provide customers a three-day cooling off period to cancel the contract and demand a refund. But restorers often expend most of their resources in the first three days of an emergency service job. Under certain circumstances, the right to cancel can be waived, following a formal procedure that requires significant documentation which wastes time. Many states have gone overboard with contract requirements which elevate the anxiety of the already-stressed customer, strain the contractor/customer relationship, delay the start of work, and could potentially increase the chances of secondary damage.

New, more stringent laws, are now being enacted, and will catch many restorers by surprise, especially when OSHA starts showing up unexpectedly on more job sites and enforcing rules that were previously “relaxed.” Perhaps OSHA has been laying low giving commerce a chance to grow after The Great Recession. We must prepare for an attack on the multi-billion dollar restoration industry, especially since the reputation of the industry is sometimes tarnished by negative press. I recently met a respected construction lawyer who said he used to represent restoration contractors. I asked why he stopped. I was sad to hear his response. He said “because they’re a shady bunch.”

Many industries have powerful lobbies, but the restoration industry is breathtakingly underrepresented and unorganized. The insurance industry has influenced many laws, as has the medical industry. In the 1970’s, doctors in “liberal” California succeeded in getting a $250,000 cap on pain and suffering damages in medical malpractice cases. It has never been adjusted for inflation. A man went to a hospital for a nose job, but charts got mixed up, and he woke up with a sex change. He received a $250,000 check and an apology.

At a minimum, good people in the emergency service industry (like John) deserve some narrowly-tailored exceptions to laws written for general contractors. Applying generic construction laws to the emergency service industry is like making ambulances obey the speed limit for the general public. The industry is responsible for the health and safety of thousands of disaster victims every year, and is entitled to be treated fairly. Let us band together to fight for what is right. This will require a group of restorers to band together and pool resources to hire a lobbyist to push for some reasonable changes in the law.