Compact thermal imaging… for the iPhone

FLIR has released a new compact thermal imager – the FLIR ONE – which is designed to integrate and attach to the iPhone 5. It’s as small as a standard iPhone accessory case and works by displaying a live thermal image directly on the phone’s screen. FLIR ONE installs in just seconds and is easy to use. 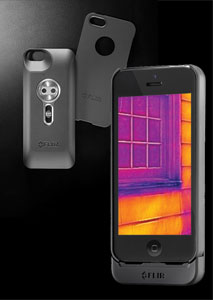 “The product allows contractors to show what’s below the surface in a building,” says FLIR CEO Andy Teich, noting its potential for easily detecting moisture problems.