National nonresidential construction spending contracted 0.6% in September, according to an Associated Builders and Contractors analysis of data published by the U.S. Census Bureau. On a seasonally adjusted annualized basis, nonresidential spending totaled $791.2 billion for the month.

Spending was down in 11 of the 16 nonresidential subcategories, with spending in amusement and recreation unchanged for the month. Both private and public nonresidential spending declined 0.6% in September.

“Second, many observers thought that America would have passed a meaningful infrastructure package by now,” said Basu. “That has not yet happened, and many state transportation agencies, along with their local counterparts, note that planning for projects has become extraordinarily challenging in the context of uncertain federal funding.

“Finally, to the extent that projects are moving forward, construction skills shortages are slowing the pace of construction delivery,” said Basu. “Were an infrastructure package to pass, it is unclear how projects would be sufficiently staffed given a higher rate of retirement among construction workers and a lack of entry into the skilled trades. These factors have continued in recent weeks, suggesting that nonresidential construction spending may remain somewhat soft during the months ahead.” 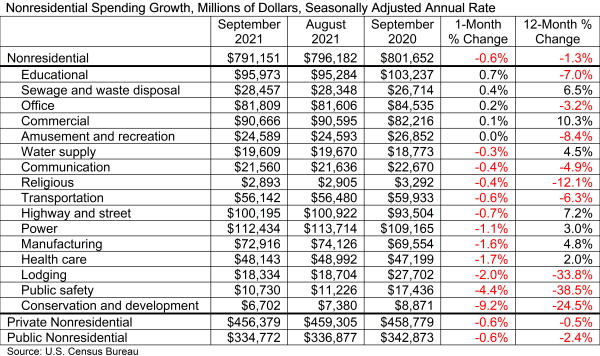