National nonresidential construction spending was virtually unchanged in November on a monthly basis, according to an Associated Builders and Contractors analysis of data published by the U.S. Census Bureau. On a seasonally adjusted annualized basis, nonresidential spending totaled $820.6 billion for the month.

“If no news is good news, then this was a fine report,” said ABC Chief Economist Anirban Basu. “There is little in the data for November 2021 that was earth-shattering. It is interesting to note, however, that the streak of meaningful monthly increases in nonresidential construction spending effectively ended in November, strongly suggesting that supply chain issues and worker shortages continue to constrain the pace of recovery in nonresidential construction (the same issues that continue to suppress contractor margins, according to ABC’s Construction Confidence Index).

“While the monthly data is overall not jarring, the year-over-year numbers are more noteworthy,” said Basu. “After declining during much of the pandemic, spending in the office segment has stabilized and is up 3.3% from a year ago. That may reflect data center construction spending more than traditional office space construction, however.

“Among all segments, the one experiencing the largest year-over-year decline is public safety,” said Basu. “During the pandemic’s early stages, spending in this category grew rapidly as America prepared for a public health crisis. That dynamic reversed itself in 2021. The other category suffering a major decline in construction spending over the past year is lodging.

With business travel still slow to return and the omicron variant wreaking havoc on airlines, occupancy will remain subpar for months to come, limiting the pace of construction spending recovery in this segment. The nonresidential construction category experiencing the largest year-over-year growth in spending is manufacturing, a reflection of the ongoing efforts of producers to expand supply to meet demand.” 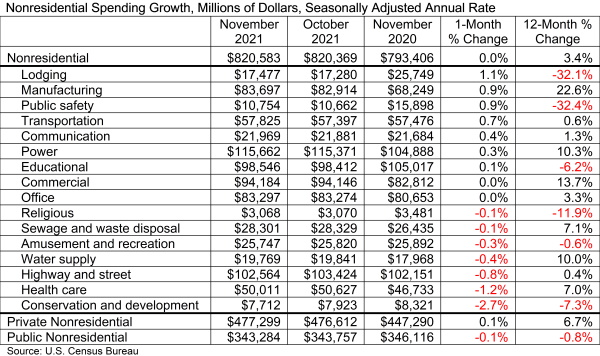