The Wonderful World of Containment

The purpose of containment, from plastic wrap to the Ionosphere.

The fundamental idea on containment is simple: keep one or more contaminants in or out of an area. Quite literally, a containment is an isolation system. Containment is designed to stop, slow, or control the exchange of one or more contaminants from one spatial environment to another. In the restoration world, we think of it as “specialized.” The truth is, it is so common, we use it, live in it, and work in it every day, no matter what you do for a living. Containment truly permits life on Earth; without containment, Earth would be a dead planet.

So, what is a contaminant? And what are the contaminant(s) that the containment is to control and to what level? Ask a contractor about containment and many think: OSHA = Engineering Control

A contaminant may be defined as: A polluting or poisonous substance that makes something impure (as in the Apple dictionary), undesired substances (as in the S500), or something that makes a place or a substance no longer suitable for use (as defined in the Merriam-Webster dictionary).

Each individual contaminant may have containment specifications and/or personal exposure limits required by OSHA or other authoritative bodies. Some examples:

The full list of contaminants and their desired control level must be determined in order to design and deploy a proper containment. Let’s start with an every day basic scenario. 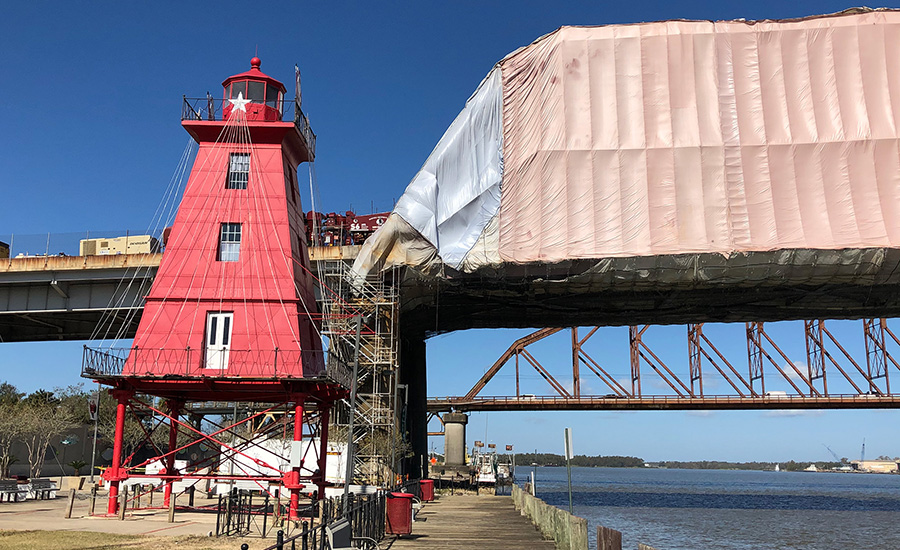 As Simple as a Sandwich

Think about how you package a sandwich for your lunch. The idea is to keep some moisture inside, and liquids, pests, pathogens, and general grossness outside. Containment material: plastic wrap. To eliminate moisture buildup on the inside of plastic wrap, causing unacceptably moist bread, simply place a paper towel as an adsorptive layer inside the plastic wrap. It also doubles as a napkin! Then, of course, the sandwich containment goes into another containment: the paper bag, lunch box, backpack, etc. Then that goes into a car, bus or train, or yet another containment, you get the idea.

What are the contaminant(s) that the containment is to control and to what level? Now, let’s step it up a bit. 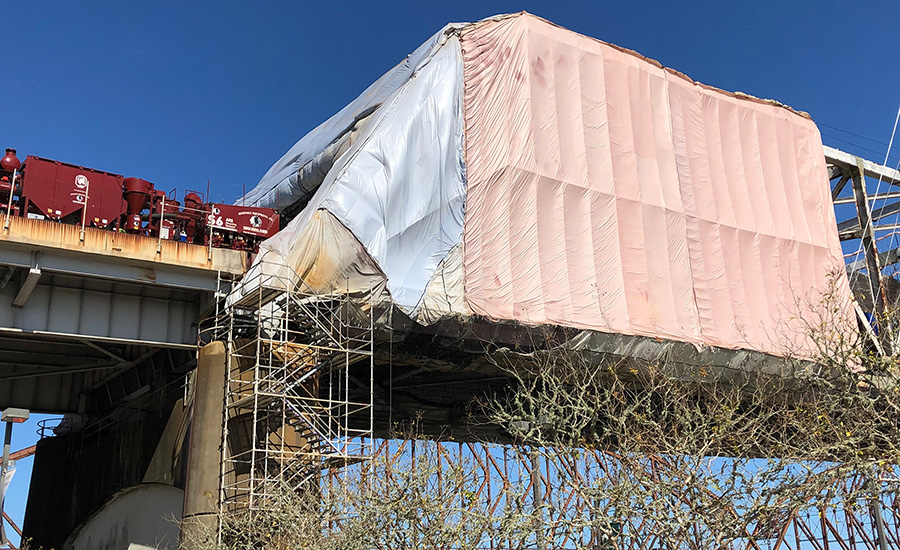 The idea is to keep some stuff out of building and some stuff in - George Carlin? Air and water leaks increase operational costs, cause physical property damage, reduce the value of the building, and quite possibly can create an unhealthy indoor environment. Since the built environment (homes and commercial buildings) are where most human beings spend most of their time, it deserves the focus of attention it is finally getting.

Think of a building’s roof, walls, and flooring systems; they all are containment for particulate matter. Roofing membranes, exterior cladding, and the vapor barrier under the slab are all there for primary moisture control. The insulation reduces the exchange of thermal energy and may also play a role in moisture control. Building wraps, interior vapor barriers, and even paint and wallpaper all have an effect on how a building breathes or controls the exchange of particulate matter, moisture, and temperature with its outside environment.

Contractors often use temporary containment in the built environment. Six-mil poly is the general go-to material, but remember if the contaminants are minimal, such as moisture on a typical water loss, 1-3 mil poly is lighter, cheaper, and sufficient. If a little moisture escapes your containment, no problem. Uses might include:

What are the contaminant(s) that the containment is to control and to what level? Now we step it up a little more… 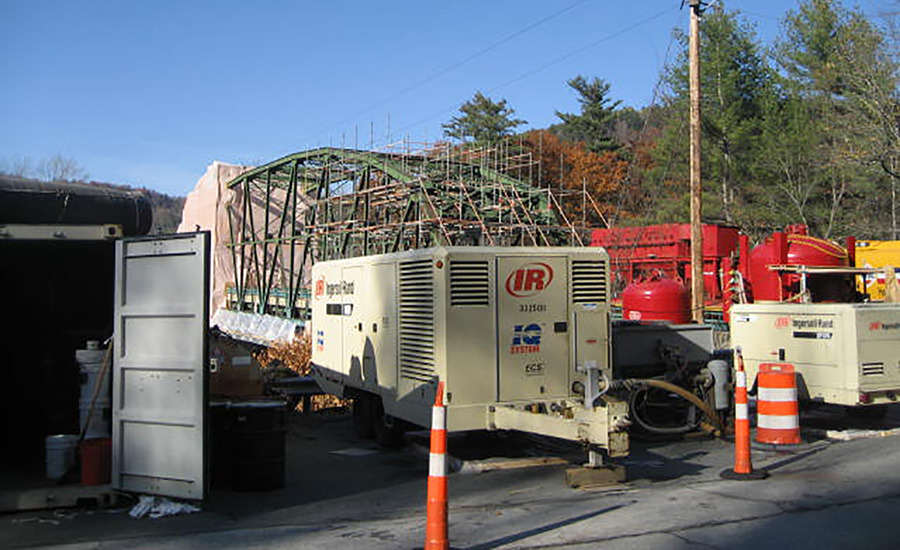 How good was that seal on those O-rings or how deep were those cracks in the heat-resistant tiles? Many great lives are lost due to containment failure. “Learn from history,” they say. True, but what if you are making history? Since this is where the most dangerous of human endeavors are carried out, caution is the rule of the day. Containment plays an incredibly important role in these industries. Air, water, and pressurization leaks in these industries can cause problems from simple discomfort to outright instantaneous death.

What are the contaminant(s) that the containment is to control and to what level? Now it gets serious for all of us… 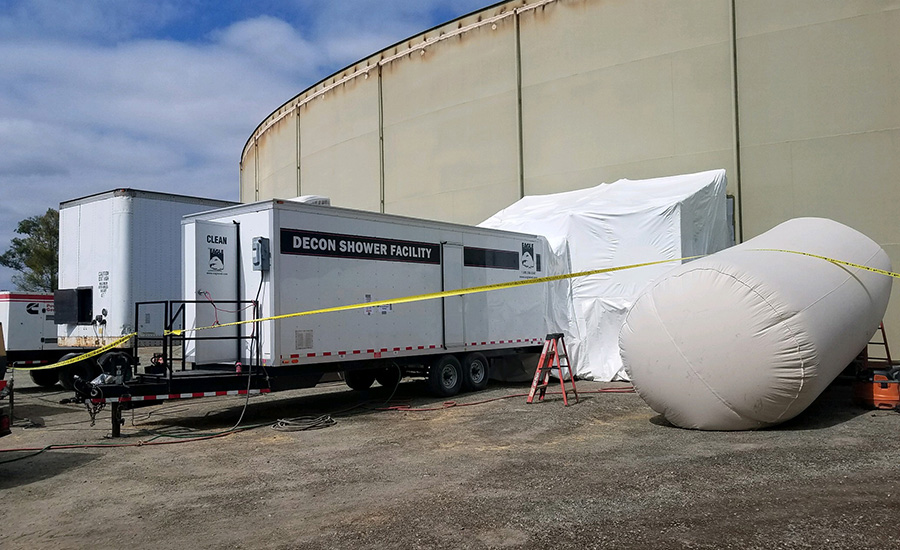 When I was a kid, everyone worried about the Atomic bomb, now it’s the COVID bug! Now, we fear the biggest bomb ever made and a pathogen you can’t even see. When these contaminants get in or out, it could be the end of humanity. Earth will reboot from our mistakes. However, even Earth can’t live without the most primary of containments: our Ionosphere and atmosphere. Problems Here = All May be Lost

Let’s talk about containment from R & D through manufacturing, transportation, deployment, and decommissioning:

Okay, that’s intense, but truly the most important human contribution to containment may be for all of us to remember to “contain our verbalization just long enough so that we can consider our thought thoroughly before it is released into the atmosphere”… especially the new digital one!

A Look at the Benefits and Types of Automatic Moisture Tracking

When is Concrete Really Dry?

Charles A. Boutall II, (Chuck) joined the Restoration Industry in 1988 and took his first IICUC courses from Claude Blackburn, Jeff Bishop, Ruth Travis and Jim Caulfield. He has been an IICUC-RC member since 1988 except for two years. He is a native of New Orleans and has an Associates in Electrical Engineering.

He is co-owner of Air Quality Specialists which provides
Courses and Consulting in Commercial losses with a specialty in Timber and Concrete Drying as well as Climate Control for Surface Preparation and Coating Projects. AQS focuses on IICR’s WRT & CDS courses and several Specialty Restoration courses approved for IICRC’s Continuing Education Credits.

Presently Chuck is Director of Education at The Restoration Technical Institute in Reading, PA. Here he trains with some of the best instructors in the industry and enjoys the ability to have a Three story 1890’s Fabric mill as a lab and hands on training facility.

He began his career as a Product support Representative at Xerox in New Orleans then to San Jose, CA as a Sr. Field Engineer for National Semiconductor Corporation providing Installation and Repair of Mainframe computers and Laser Barcode Scanning systems for the US military all the way to Grocery stores.

At Munters Cargocaire Corporation he was a District Manager for the Moisture Control Services division then moved on to Sr. Application Engineer for Consultation, design and build of dehumidification projects throughout the US and Central America. Here Chuck provided dehumidification services ranging from dog food drying to climate control on Nuclear submarines and the Space Shuttle.

Moving on to Sponge-Jet Inc. Where he planned and implemented the start-up of a new low – dust blasting technology in the Southern United States.

He has also written a series of articles about Commercial Drying for Restoration and Remediation Magazines.

I have dried millions of square feet of structure, hundreds of thousands of books and documents and designed permanent systems for various manufacturing and storage projects over my 31 year career as an Application Engineer.

The Importance of Proper Containment during Mold Remediation

Determining if Cleaning Chemicals Work in the Real World of Restoration

Containment: The Weapon of Choice in Mold Remediation