How many times have you shown up at a job site only to find your containment has stopped containing? Sometimes it’s the tape coming unstuck, sometimes the homeowner has been poking around, and sometimes all you get is a collective “I don’t know” along with the ever-impressive shoulder shrug. For those of you with kids, you will recognize that scene. Whatever the case, containment is both necessary and a huge pain. It is labor intensive, heavy on the consumables which inevitably end up as disposables and, despite the apparent straight forward simplicity of the concept, it often requires an experienced tech to pull it off effectively. Someone who has figured out the tape doesn’t stick to a popcorn, for example. (Ugh, seriously, how was that EVER going to work?!)

Whether it is for isolating contaminants or to control temperature and humidity, containment is a necessary tool in our tool kit, but it is fraught with issues. If we don’t do containment right, we:

Remember, we are the good guys! We are there to rescue them from the evils of H2O, mold infestation, and fire damage ... until we aren’t. Until we are the punching bag; the bad guy. How many of you have faced insurance companies that don’t want to pay for containment, but then complain about the length of the drying process? Drying faster would definitely placate them, but is a 15 to 30 percent reduction in drying time thanks to meticulously created (aka: took for FREAKING EVER!) containment enough? How much more often would we use containment if it was cheaper and easier to do?

Our teams go into the dirtiest, nastiest, and often inherently dangerous places day in and day out and do the jobs many can’t or won’t do. Many people just can’t imagine entering a Cat 3 basement or a crawl space populated by all manner of critter. The job is hard on the body, it’s hot or cold, and almost always wet. The air is often trying to kill them slowly and the snakes, rats, raccoons, and spiders are trying to kill them quickly. We invest thousands every year in PPE so that, to the best of our ability, we ensure our employees return home safely to their families every night and show up for work the next day to do it all over again. How much thought do we give to making their job easier? The easier their job, the more productive they become, the more jobs that get done, and the more money everyone makes. That, in turn, results in higher overall morale and job satisfaction, simply by finding ways to make their jobs easier. 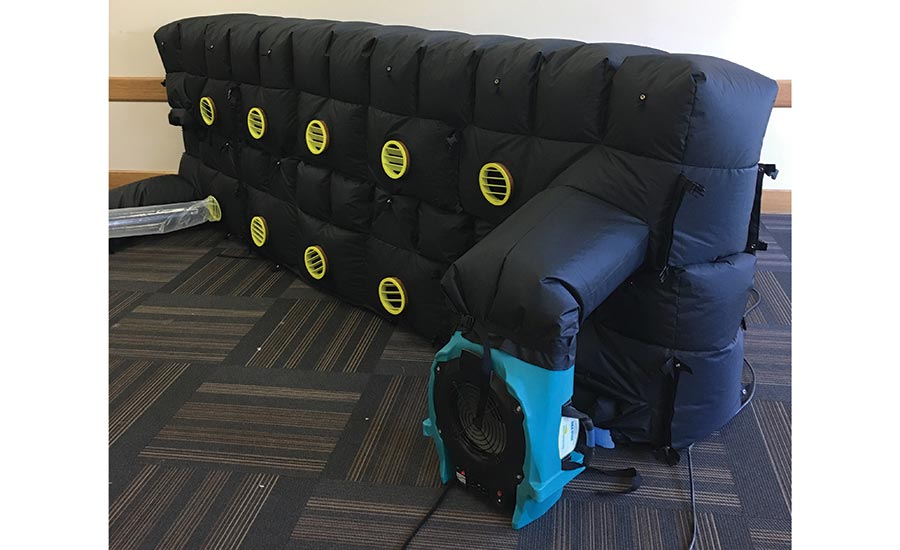 There are ways to make conventional containment better. By conventional, I mean plastic sheeting, staples, tape, items to weight the plastic down, and so on. Have you ever considered shoving a piece of fiberglass insulation (not the wet stuff you just pulled out, just sayin’) or a plastic bag or wad of sheeting into a void that is otherwise impossible to seal off because there are just too many pipes and wires? Remember, we are trying to isolate the affected space and a 2x2 hole is a really big leak! How about using bits of duct tape as “washers”? How many times do you put a staple into plastic only to have it pull through? Try putting a square of duct tape onto the plastic right where you intend to staple. I know, some of you, maybe even most of you, are thinking there is nothing new here. Of course you use tape to reinforce the spot where you staple, but maybe some of you are still new or were trained poorly or just trained by a lazy tech.

What about this: when it is really cold or hot in that crawl space or attic space, have you ever considered two layers of containment? I know, it sounds like a lot of work, but the air in between acts as a barrier in the same way that the inert gas does in a double paned window. Air insulates, but remember you really need to focus on all of those leaks, even the small ones. If the air is exchanging freely within the double containment or even worse, with the uncontained space then the efficiency and efficacy drops off a cliff. Then all that work isn’t worth all that much. Also, remember that many standard LGR dehus work best between 70 and 90 degrees Fahrenheit. Anything outside those parameters causes efficacy to take a hit.

The fact is, whether you fill the voids with your old PPE or reinforce your staples or have just gotten really good at manipulating 10, 20 or 30 feet of floppy plastic that is always under you or your equipment or hung up on some darn thing, a staple gun a hammer and a roll of duct tape that sticks to everything but what you want it to stick to all while that sharp rock that follows you into every crawl space is currently jabbing into your body, working at the very edges of your sanity… OK, maybe that’s a bit dramatic but you KNOW what I’m talking about. Whatever the case and even if all of that is true and you or your crews are containment masters, you are still spending a lot of time creating something only incrementally better than nothing at all, even if you follow my advice and do twice the work and use double the materials to improve the thermal performance of your containment.

There is a better way. There is a way to contain the warm dry air, to isolate the dirty air, to reduce the noise, to provide a high tech visual barrier, to increase efficiency by more than 66 percent, reduce waste (think green and sustainability!), increase profitability, decrease the wear and tear on people and equipment and finally, for now, placate the insurance companies. 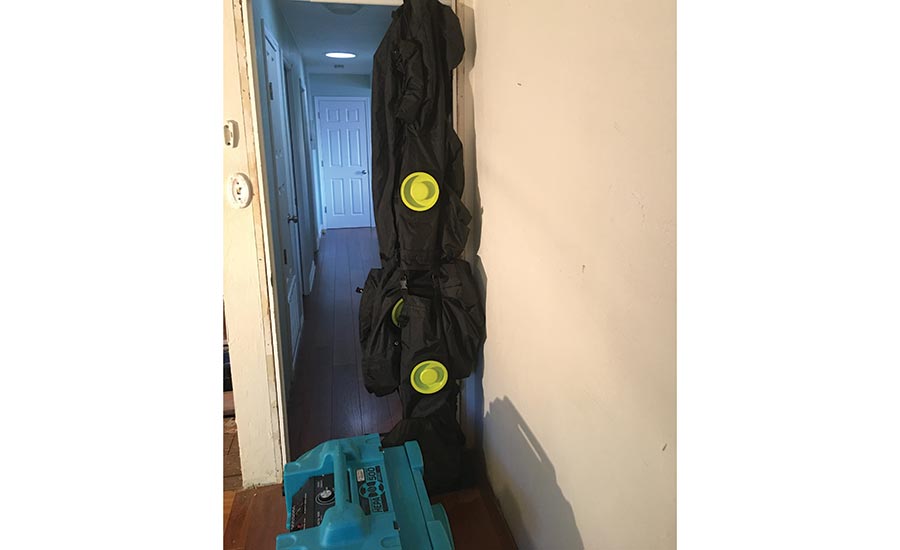 There is a new, patent-pending containment system. It requires minimal setup, often less than 10 minutes in the driveway, and about three minutes in the crawl space. The Airwall provides nearly airtight containment that deploys itself, and can target specific areas using poly tubing that also deploys automatically. It can also treat broader areas that need drying by creating a very effective vortex and/or general turbulence at the boundary layer. The Airwall is an effective tool that uses the air movers that you already have to create reliable, super effective, easy, reusable and highly efficient containment in crawl spaces with the bare minimum of clearances, or in crawl spaces built on a steep grade. This versatility of this innovation means it can also be used in a living or attic space, on mold jobs and someday, with federal approval, even on asbestos and lead jobs, you name it!

Whatever containment method you choose, it’s important to be sure you or your team are properly creating the containment zones, and that the zones are doing their jobs.

Containment: Is It a Choice or Just Science? With a passion for proper containment and innovative products, Keith Gangitano is part of a team behind a new innovation in restoration call the Airwall. The patented product promises to make containment simpler and more effective, while increasing job efficiency and profitability.

Containment: Is It a Choice or Just Science?