Tweak your business for success in a virtually untapped market.

When a project comes my way that’s not an everyday thing, it’s stimulating, and in some cases, it’s downright exciting. After my military service in the early ‘90s, I went to work in the field as a carpet and HVAC cleaning technician. In 1998, I opened my own carpet and air duct cleaning business in Bend, Oregon, giving it the name Guarantee Cleaning Services.

Shortly after, dissatisfied with current equipment available, I developed a duct cleaning system that solved a lot of the problems present in existing equipment, RamAir International. Today, after nearly 30 years of experience in the global HVAC cleaning/restoration industry, I still never claim to “have seen it all.” That having been said, the following is an account of an experience that brought me one step closer.

My company has performed duct cleaning, disaster remediation, and forensic restoration services in tens of thousands of buildings, including residential homes, businesses, government facilities, hospitals, movie theaters, and even a few prisons (most recently the county prison in Fresno, Calif., a multi-million square foot facility). 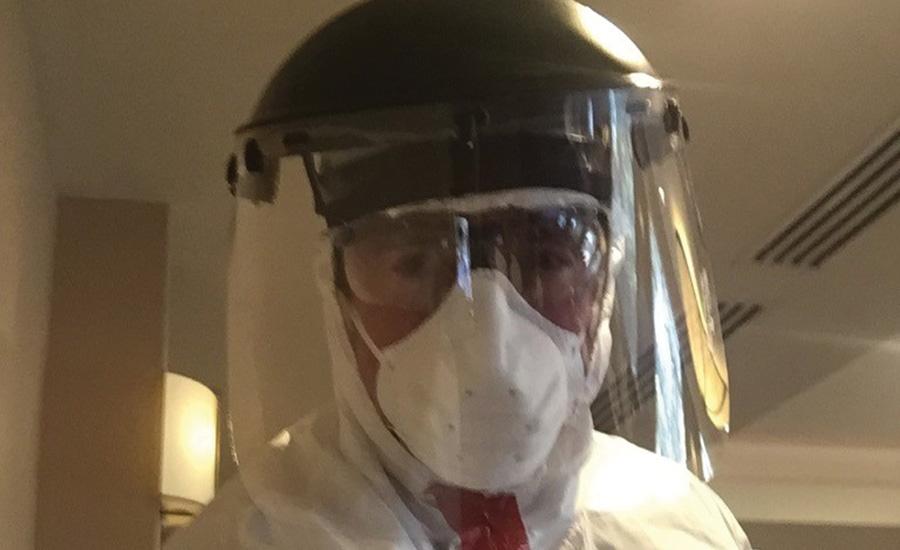 The Call for Help

When the call came in this summer requesting that we perform meth decontamination in a building on an Indian reservation, my interest piqued. I acquired directions to the site and drove the hour and a half to the location. When I got there and looked up at the elaborate ceremonial longhouse, I knew I was in for an experience I’d never forget.

A Native American longhouse is considered one of the most sacred of tribal structures. It’s where the tribe holds ceremonies, the elders gather for tribal council meetings, and where the most important decisions are made for the good of the tribe. It’s a place of respect.

Of course, I enthusiastically (and humbly) accepted the offer to help perform the service.

The tribe hired First Team Restoration from out of state (Boise, Idaho), because they have a longstanding reputation for being some of the best in the business. First Team’s project manager, Darrin Preece, met me outside the building with a big smile. He shook my hand and introduced me to the team. We donned our PPE and entered the building. As expected, they had areas of the interior partitioned with Zip Walls, where specialists were performing various decontamination processes in the 10,000 sq. ft. structure.

It was an awe-inspiring sight, with traditional and modern Native American artwork and themes throughout. As I toured the building, I got a look at the duct layout and the 15 rooftop air handlers. 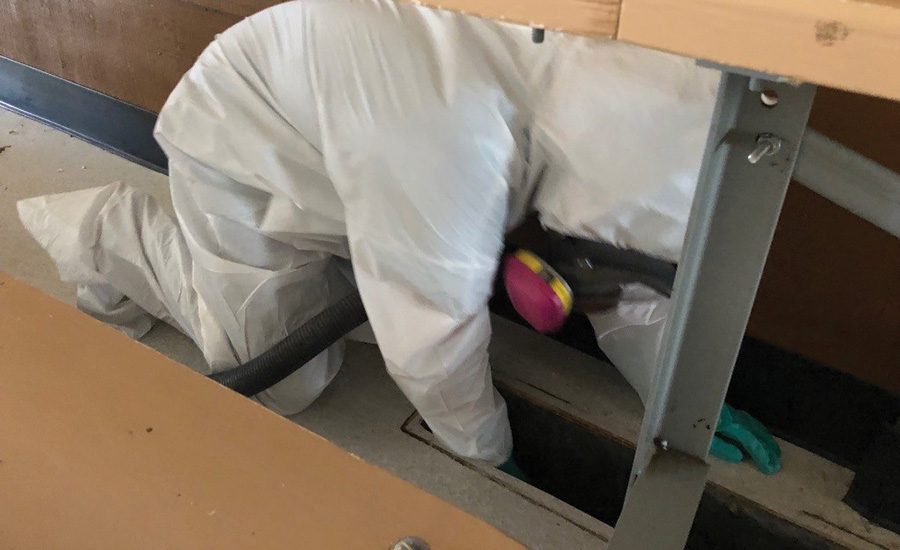 One nice thing about HVAC- although there are variations, is that it’s usually pretty straightforward. There are three main parts:

Usually, the ducts are replaced in a meth decontamination procedure, but in cases like this, where the ducts are part of the architecture of the building, they need to be restored.

The first step in an HVAC meth decontamination project requires a complete removal of debris from inside the ducts; this means chunks of wood, sheetrock, garbage, dead insects, rodent feces, construction materials; it’s staggering how much garbage can be lurking inside a duct system.

Remediation also entails a thorough cleaning of everything stuck to the inside walls of the ducts, namely dust buildup. I’ve removed as much as an inch or more layer of dust that’s accumulated on the inside of ducts. This material requires physical agitation, preferably in the form of a whip to remove. Brushes used to be normal protocol, but nowadays with most modern ducts being made of thin, plastic flex duct, brushes are advised against. Nails, screws and staples left there from the construction of the building, can be picked up by the rotating brush, swirled against the sides of the plastic membrane, ripping the duct to shreds.

Whips provide as much (if not more) physical agitation, without the rotation, and thereby don’t damage the ducts, and are therefore recommended in lieu of brushes.

Focused, high pressure air from a blasting ball also does an excellent job of dislodging debris and directing it toward the opening where it is sucked/vacuumed out of the duct system.

An effective duct cleaner will follow with a direct vacuuming of the ducts, to remove the larger pieces of debris that were too heavy to become airborne (and thus sucked out) via the whip/blast step.

In addition to the cleaning of the ducts, the air handler must be thoroughly cleaned. The method of this varies between system types, but regardless of the method, in the case of meth decontamination, the cleaning must be extremely detailed.

Once the ducts and air handler are thoroughly cleaned of all debris and we’re down to bare duct, a decontamination solution is then applied to the duct walls and air handler. 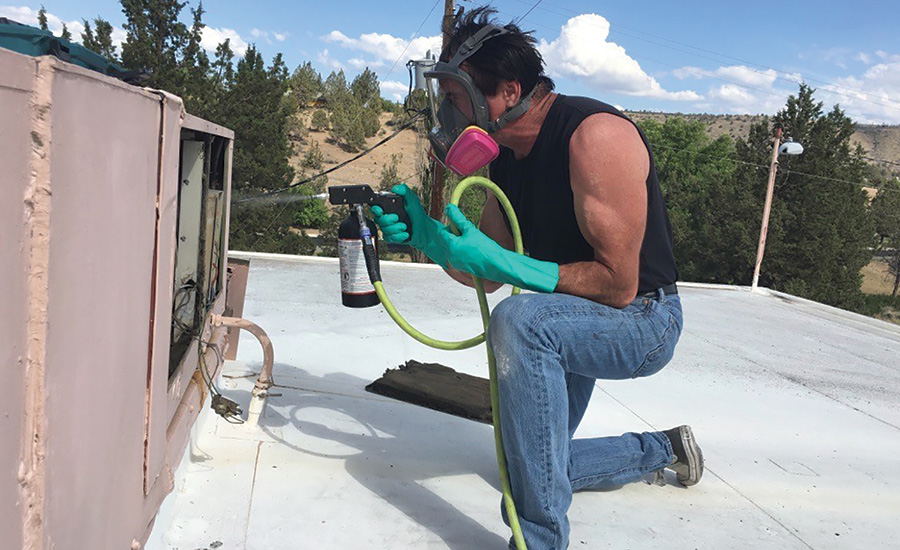 I reached out to the chemical manufacturers and distributors, and I was requested to not publish what solutions are suited for this purpose, due to potential liability issues. My contact information is at the end of this article, for more information please reach out to me, I’m happy to help.

That said, let’s get to the application method, because no matter how well the chemical works, it’s only as good as the method by which its applied. For decades, the way a liquid was applied to the inside of a duct system was to blow it through the return duct with an LVC mister or fogger, with the air handler fan running, carrying the solution through the system.

The problems with this method of application were twofold. First, very little-to-any of the solution actually adheres to the inside of the ducts, but even worse, that fog blows through the ducts and out of the registers where it fills the entire interior of the building. The method, despite being performed for decades, was a complete failure.

The solution (pardon the pun) to this problem was the introduction of a duct fogging system patented by RamAir International called SaniJet. This system atomizes the liquid solution where it is carried through a long hose and is released through a 1” Teflon ball on the end of the hose. It uses compressed air with a custom designed application ball dispersing an ultra-fine mist inside the duct in a 360° pattern. This ensures that solution is applied directly to the duct walls and surfaces. No fog enters the interior of the dwelling.

In the case of the air handler, the application hose can be disconnected from the canister, allowing the SaniJet to blast the atomized solution directly onto the air handler surfaces.

Once the cleaning has taken place, there is a rigorous test to make sure there are no toxic chemicals left from the meth manufacturing process. Darrin told us the good news that the HVAC system passed with flying colors, adding that it was the first time in his career that he’d contracted an air duct cleaning company and seen them pass the first time out. Every other time, the duct cleaners had to reclean and retreat two to three times before passing. 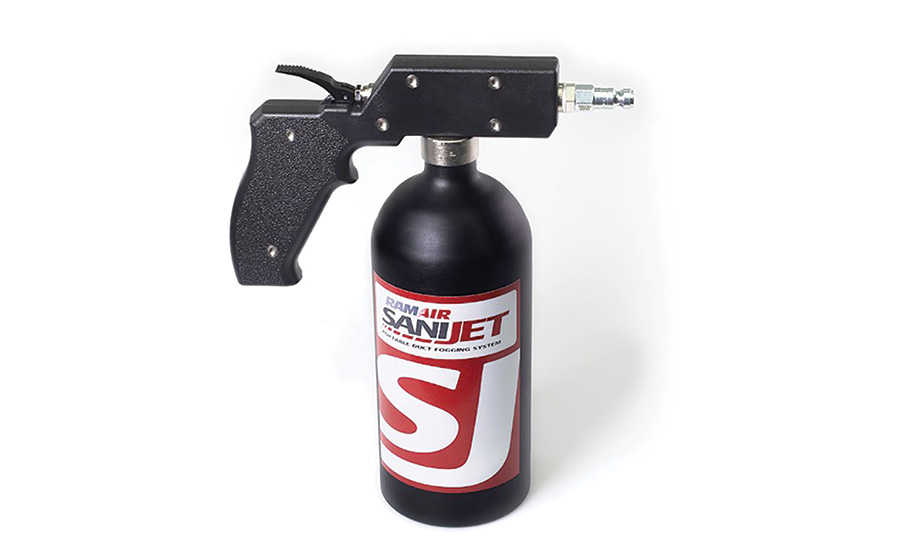 Air duct cleaning, as a business, has continued to grow exponentially over the past several years, and it’s showing no signs of slowing down. Residential homeowners and commercial building managers are rapidly realizing the importance of indoor air quality.

Until recently, meth decontamination of HVAC systems has been almost unheard of in the restoration industry. With the availability of better cleaning methods, HVAC meth decontamination is expected to become more and more in demand, as it is quicker, easier and less expensive than replacing the entire heating and cooling system.

For information on how to get started in duct cleaning, or how to become trained in meth decontamination, contact the National Air Duct Cleaner’s Association and/or drop me a line. After nearly 30 years in the business, the most joy I receive is by helping others get started in this rewarding, lucrative industry.

David Hart, Founder and CEO at RamAir International, is a 30-year veteran in the professional cleaning and restoration industry. He is the inventor of the RamAir line of HVAC duct cleaning equipment and the OzoGen 16g high-output ozone generator— industry leading products that are in use in every major city of the United States and 21 foreign countries. Hart also holds a position on the board of forensics remediation for the Restoration Industry Association (RIA). To contact him, visit his website ramair.co.