The Importance of Containment in Abrasive Blasting

The most important consideration regarding particulate dust is its level of toxicity, which depends upon three interdependent factors: the substrate being blasted, the contaminants being removed, and the type of blast media used.  Substrates such as concrete and sandstone masonry, for instance, are partially comprised of toxic materials; the more abrasive the blast media, the more toxic substrate is forced into the air in the form of dust during blasting.  The same holds true for the toxic contaminants being removed, such as paint chips and many types of coatings.

Toxicity is also a factor in the blast media itself. One of the most toxic media is sand. Sandblasting creates silica dust, which can cause a permanent, irreversible scarring of the lungs (silicosis) when inhaled over time.  On the other side of the blast media spectrum is baking soda. Baking soda is a wholly non-toxic, mild abrasive that removes contaminants without removing the potentially toxic substrate underneath.  As a result, choosing soda blasting as a blast method significantly diminishes the toxicity of the overall operation.

Regardless of toxicity level, however, ensuring containment remains important to preserving air quality and to protecting blast operators from injuries, such as eye damage, burns and skin penetration, that can be caused by forcing particulate dust into the atmosphere. 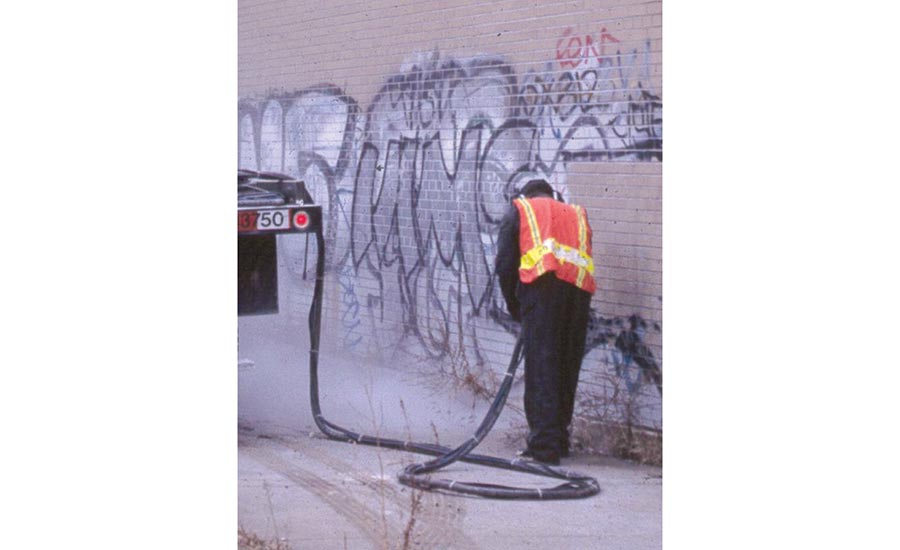 There are several factors that go into ensuring containment in the blasting process, including environmental controls, personal protective equipment (PPE), training and monitoring.  Each is discussed in more detail below.

When combined with the built-in advantages of using baking soda as a blast media, vapor blasting is an especially effective blast method.  In some cases, choosing vapor blasting may represent the only type of environmental control necessary. 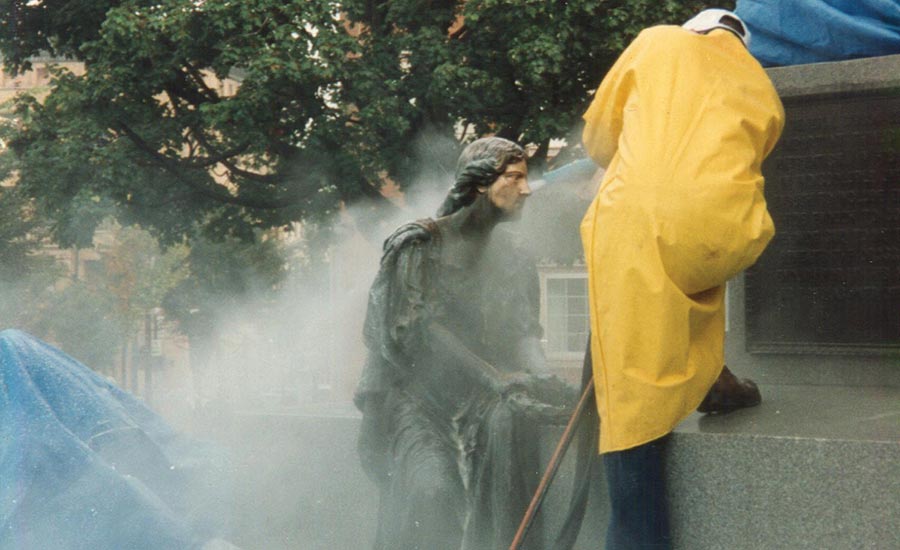 If the level of dust suppression afforded by the selected blast method is insufficient for containment, additional equipment may be used to pull airborne particulate dust out of the atmosphere. In small work areas, for instance, fans can be used to create a negative-pressure environment and fitted with dust socks to collect the dust that passes through. The same principle can be applied in larger areas by employing high-powered dust collection units that channel air through ductwork fitted with pleated micron filters.

A well-designed area enclosure can be used for effective containment with any type of blast method, including dry blasting. The enclosure strategy is decided primarily by the dimensions of the material being blasted; smaller materials can be enclosed within the blast equipment itself, while larger structures may require containment to be built around an open-air site. Options include:

Blast cabinet: Blasting to remove contaminants from small objects can be accomplished in a blast cabinet; this provides one of the most complete containment solutions, as the cabinet is a fully sealed structure. Blast cabinets provide a window for viewing the objects inside as they are worked on, allowing the blast equipment operator to remain safely outside.

Blast room:  Objects too large to fit in a blast cabinet can be cleaned in a blast room. In this case, the blast operator works inside a self-contained room, wearing protective gear to ensure safety. Others near the blast operation are fully protected from dust and debris by the room’s seal. 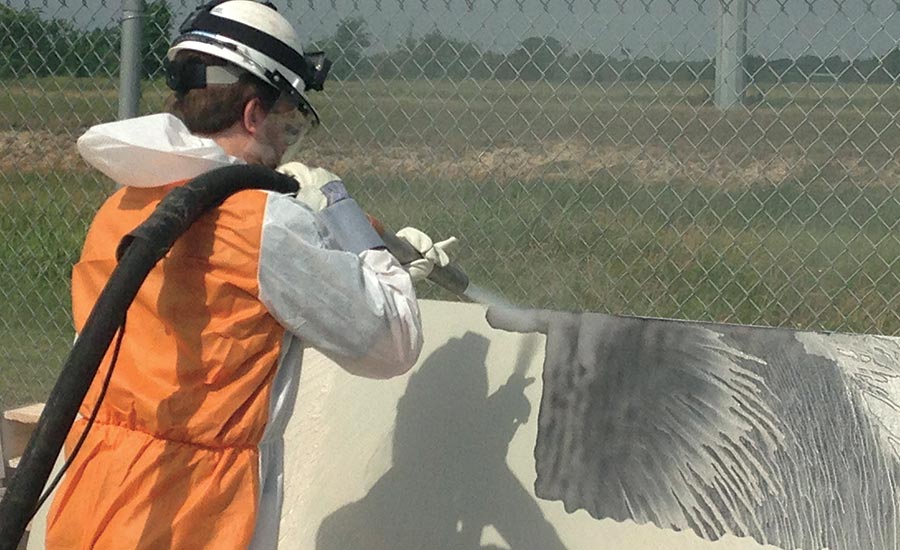 Portable blasting: Portable blasting is made possible by a piece of equipment known as a blast pot. This is an appropriate method for open-air blasting in large sites.  It offers no built-in containment, but enclosures such as vinyl tarps, heat-shrinkable plastic sheets, reusable fabric ZipWall® products and others can be built around the work area to provide containment.

Each of these enclosure strategies is suitable for soda blasting operations.  By contrast, other types of blast media used in open-air sites may require significantly more complex area enclosure strategies, such as hermetic sealing to prevent the escape of non-filtered air, emissions and debris.

All blast methods require the use of personal protective equipment (PPE); how much is required varies by the type of blast media selected, the effectiveness of environmental controls and the level of toxicity involved.  Always refer to the safety data sheet (SDS) for the selected blast media for PPE recommendations.

Because of the non-toxic nature of baking soda as a blast media, soda blasting can often be performed with minimal PPE.  The safety data sheet (SDS) for ARMEX™ indicates the following PPE requirements:

A supplied-air respirator (SAR) or self-contained breathing apparatus (SCBA) is indicated for soda blasting only when exposure may exceed the established occupational exposure limit (OEL), or in confined spaces.  By contrast, air-fed respiratory protection is standard for many other types of blasting media, which may also require protective clothing such as blast hoods and full-body blast suits.

More details on best practices for PPE may be found on the website for the U.S. Department of Labor’s Occupational Safety and Health Administration (OSHA).

It’s important to note that ensuring best practices from an environmental and equipment standpoint is only half the battle; equally important is providing sound training for those involved in the blasting process.  Most first-time blast pot users, for instance, are unaware of the importance of containment.  At the very least, this can increase clean-up time and overshadow workers’ experience of the operation.  Inadequate training also could lead to lasting damage to the environment and/or negative impacts on workers’ health especially when more toxic blast media types are involved.

The experience of working with various blast media and delivery systems can vary greatly depending on the level of guidance received from materials suppliers.  It is highly recommended to use companies that can assist with training in the proper use of equipment. 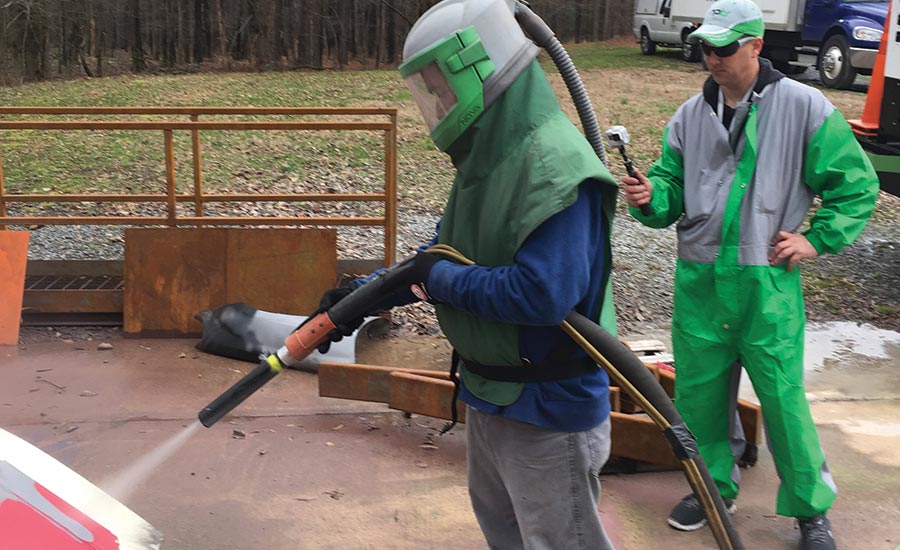 After establishing best practices for containment, it’s important to establish mechanisms for ongoing monitoring to ensure compliance.  Of primary importance for any type of abrasive blasting operation is periodic testing of air quality in and around the worksite, allowing a worksite manager to determine whether airborne particulate concentrations fall within acceptable standards and effectively gauging the effectiveness of environmental controls.  PPE must also be periodically tested and inspected.

More details on acceptable standards for air quality may be found on the website for the National Institute for Occupational Safety and Health (NIOSH) maintained by the Centers for Disease Control and Prevention (CDC).

Brian Waple is the ARMEX™ Business Manager for the Church & Dwight Co., Inc. makers of ARM & HAMMER™ baking soda. Brian has over 16 years of business, product and brand management experience in the specialty chemical industry.

The Importance of Proper Containment during Mold Remediation