Commercial adoption of drones is exploding in today’s high-tech, information-on-demand society. According to the Federal Aviation Administration, there were just over one million drones in the U.S. at the end of 2017. Sometime last year, that number surpassed two million, and that is expected to more than double this year to four million. DroneDeploy’s 2018 Commercial Drone Industry Trends Report named construction, agriculture, and mining as the three fastest-growing commercial adopters of drones, with construction in the lead. That, of course, includes restoration contractors.

In Metro Detroit, Bloomfield Construction is ahead of the pack, having embraced drones for scoping roof projects sooner than later. The company specializes in both restoration and roofing, and therefore took another step forward by adding thermal imaging technology to their drones earlier this year. The Bloomfield Construction team hopes this new technology will help pinpoint problems areas quicker and help them better serve their customers, especially when it comes to larger commercial losses or roofing projects.

“With the thermal camera, you can fly the drone at night after a hot, sunny day, and if the insulation inside the roof is wet, you will see more temperature variations as the sun sets and the air temperature cools,” explained Austin Petrucci, sales engineer at Bloomfield.

Petrucci admitted the technology is a bit difficult to use in the winter since Michigan has so many cloudy days, but once the weather breaks, and there are more sunny days, it will be perfect for using to scope roofing projects. For now, he uses their other drone, without an IR camera, at least once a week for inspections.

“We have really tried to separate ourselves from the competition by using drones,” Petrucci said. “It is very beneficial when trying to inspect things like chimneys and hard-to-reach areas where there might be a leak or moisture source.” 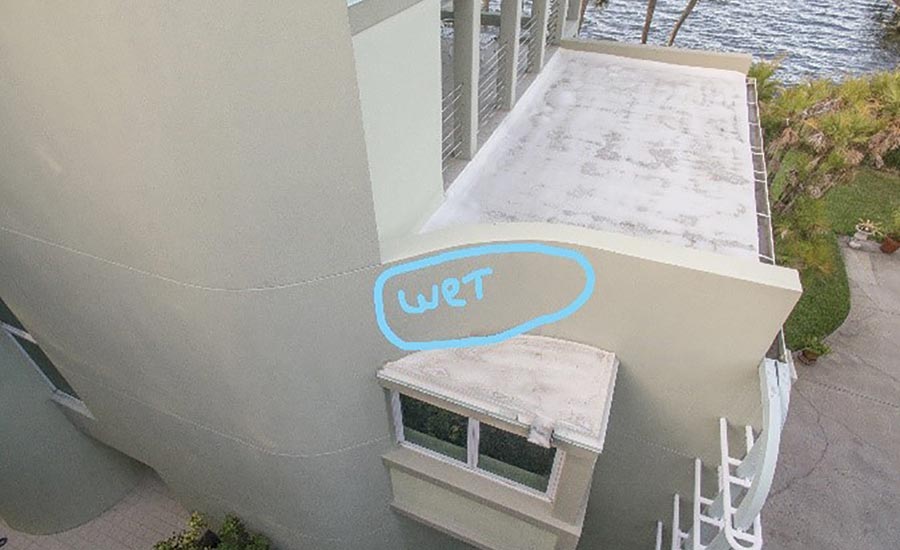 In our industry, FLIR tends to be the brand of choice for thermal imaging cameras. They started incorporating a thermal imaging sensor into the DJI Inspire drone back in 2016. Today, their technology incorporates into other airframes as well and is used in a number of industries, the top three being commercial roofing inspection, solar field inspections, and first responders which use IR for search and rescue, fire scene assessments, fugitive apprehension, etc.

For restoration contractors, the real value of IR-equipped drones is finding damage that may not be readily apparent, or takes time to develop.

“When inspecting the exterior of a residential structure, especially one with stucco or siding, hidden storm damage and resulting leaks may accumulate over a longer period of time, perhaps weeks or months. These areas retain the moisture in a confined area, tend to absorb more moisture, and hold the thermal energy that IR uncovers,” explained John Anderson, Business Development Segment Leader of UAS and Product Manager of the Instruments Division for FLIR Systems Inc. “Flat roofing commonly found in commercial applications and some residential areas also receives storm damage that may not be immediately visible to the naked eye.”

These inspections can be done in a matter of minutes with your feet firmly on the ground and even done without the building owner present, as long as you have their approval, since you don’t need to actually enter the structure at this point.

That said, Anderson added that for residential roofing projects with a sloped roof, exterior IR inspections can sometimes be challenging because the materials simply don’t hold enough moisture or energy to be visible on the camera. Also, composite shingle or roofing tiles may have a small air gap for ventilation. Combine that with low thermal mass plywood, and again, spotting moisture intrusion is difficult. In these instances, Anderson suggested doing more traditional inspections from inside the attic with IR cameras, moisture meters, and a good, old-fashioned flashlight. Keep in mind, there are moisture meter/IR camera combos available on the market today to help streamline the inspection process.

If you do see potential moisture intrusion with an IR-equipped drone (remember, IR cameras show temperature differences, not actual moisture), it is still important to verify in other ways.

“After an inspection is performed and an area of concern is identified, then you can schedule with the building owner for an onsite verification with a moisture meter,” Anderson said.

The same can go in reverse as well – if a traditional inspection doesn’t seem to reveal the true problem. Anderson recalled a customer in Florida who had water coming into the main living area through the ceiling. They had an inspection done on their flat roof, but no moisture source was found. So, they sent up a drone.

“Upon inspection, the roof was not the source of the moisture, it was the top of a stucco wall.  Water was entering through the wall, working its way slowly down, and eventually entering the interior of the structure,” Anderson said. “The FLIR thermal-equipped drone successfully found the leak quickly and safely without the need for the inspector to climb up a ladder or walk on the roof.” 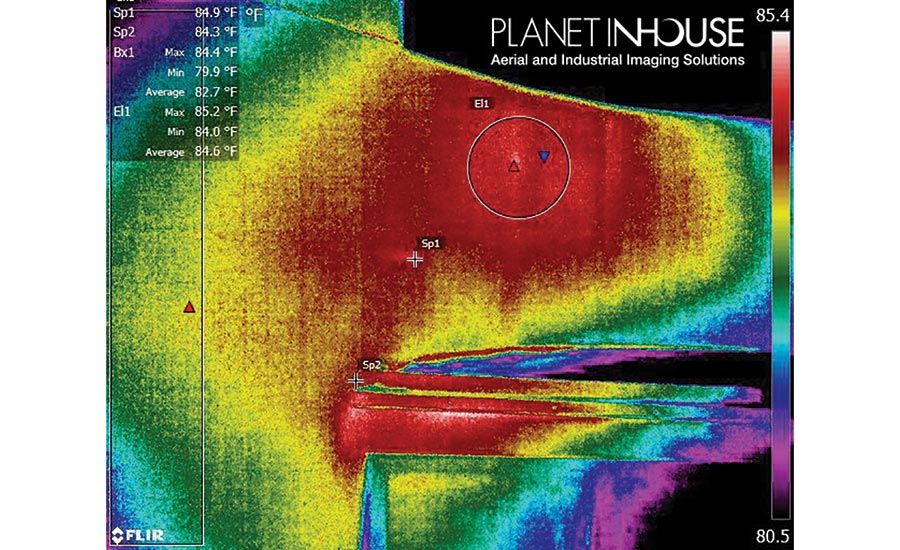 There are a few things to keep in mind before taking off. First, make sure your team understands how thermal imaging technology works. Some companies, like FLIR, offer IR training classes with a specific UAS (unmanned aerial system) IR certification. Environmental conditions play a big role in inspections like this, and will impact your thermal scans either in your favor, or not. This goes back to Petrucci’s comments earlier in this article about the outside air temperature, overcast or sunny skies, and other weather-related conditions.

Also, be sure you are operating your drone within the rules of local, state, and federal authorities. If this is a technology you plan to use often, consider sending a few of your employees through an FAA course to become a certified drone pilot. You can find options on the FAA’s website.

The Evolution of Thermal Imaging Technology