The Forensic Files: A Turn in the Road

Legendary lawman and “Texas Ranger” Frank Hamer, who along with Ranger Maney Gault tracked down and ended the criminal careers of Bonnie and Clyde in a hail of gunfire on a rural dirt road in Louisiana on May 23, 1934, referred to them as “a turn in the road.” Those decisions made, and actions taken, that would have long and even life-changing consequences that no one really planned on, or saw coming. For my family’s cleaning business, our “turn in the road” happened in 1969, when my father answered a phone call from a gentleman he knew from his Sunday school class. This gentleman’s son had made the unfortunate decision to take his own life with a firearm. In 1969, there was no such thing as a “Crime Scene Cleaner”; that label would be made up by Hollywood for films such as “Sunshine Cleaning” and Samuel L. Jackson’s “The Cleaner”, both released in 2007. In 1969, all that the gentleman knew was that my father cleaned things; what my father knew was, someone was hurting, and he could help.

My father’s approach to all cleaning scenarios was based on the science of cleaning and the fact that all good cleaners ask themselves the same questions for every project: what am I cleaning and why? And what are the contaminants? Knowing that the scene would be contaminated with proteins and lipids and would require post cleaning disinfecting, my father loaded his van with everything he thought he might need and headed out. When my father arrived in his old Ford van, complete with a fresh paint job, but still unlettered, there were two plain clothes detectives still on site waiting for the medical examiner’s vehicle to remove the deceased from the scene. As my father approached the house, one of the detectives stopped him and asked if he was a family member.

“No, sir” replied my father, “I am simply here to clean.”

“Well, you’ll have to wait until the M.E. gets here and remove the body. It’s clearly a suicide so once that happens, the scene is yours,” said the detective.

“Wait a second,” said the other detective. “You know how to do this?”

My father responded the way any red-blooded American man would: “Yes.”

“Do you have any cards?” asked one of the detectives.

My father then handed each of the detectives several business cards which read “Sani-Sheen System Inc. The Ultimate in Carpet Care…We remove soil, not rearrange it! Joe B. Jones President.” Nothing on my father’s business card said anything about remediating the mishaps and mayhem of the human condition. But also missing from that business card were care, compassion, and a deep concern from one human being to another, during what is quite possibly one of the worst days of their lives. 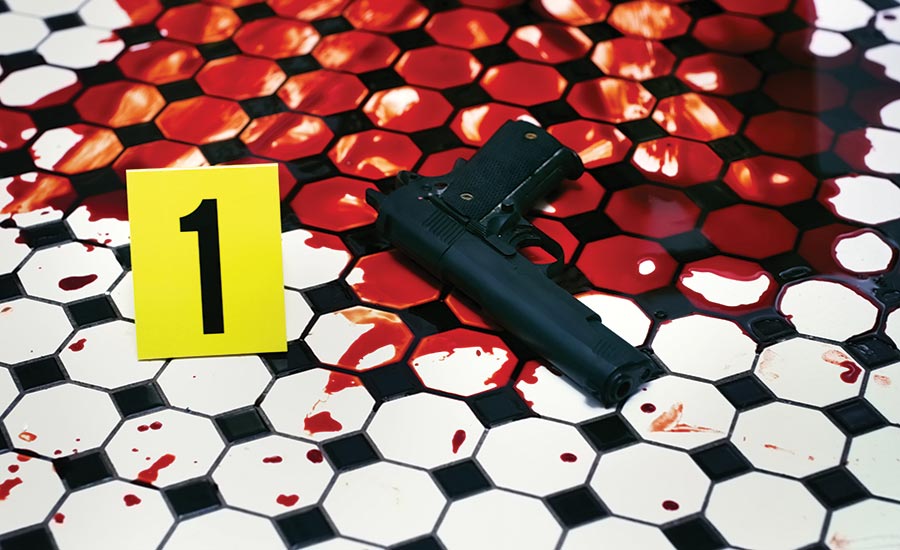 After the departure of the medical examiner’s vehicle, the scene was released and my father began the solemn task of his chosen vocation. Later that evening, when my father got home and walked through the front door, the first words from my mother’s mouth were not “Hello” or “Welcome Home” but “How’s the family doing?”

My younger brother, sister, and I were then ushered into the living room where we were given instructions to watch the new Curtis Mathis television set to which my mother had uncharacteristically raised the volume so that she and my father could talk in the kitchen and dining room, away from the potential eavesdropping of their childlike minions.

Today, we know that the conversation and cups of coffee shared between my mother and father are not only psychologically healthy for those involved in the forensic cleaning and restoration process, but is to be encouraged during a post-ops debrief. We had a lot to learn. One thing was certain though, we had taken a “turn in the road.”

In 1972, I was 13 years old and mornings began at 4:30 a.m. My brother and I would get up and throw our newspaper routes then go to school. After school, we would work at our family’s cleaning company which, by now, had grown into a cleaning and restoration company. Though never advertised or really even talked about, a niche service we provided was also growing: death scene clean-up. The term “forensic restoration” was years on down the road, so each incident was simply labeled as per type. An example would be that if a murder had occurred, it was a homicide clean-up. In the world of forensics, there are four types of death. homicide, suicide, accidental, and natural. Everyone gets a toe tag with one of those four types of death, period. Well, that is unless you’re Bruce Lee or Elvis. Bruce Lee’s death was officially ruled “death by misadventure” and Elvis? Elvis was last spotted driving a Jimmy Dean sausage delivery truck outside of Tulsa, Oklahoma. But, for the rest of us mortals, it’s homicide, suicide, accidental or a natural death.

On a Saturday afternoon in 1972, I was working with my younger brother cleaning oriental rugs in the back of the shop. I went up front to ask my father a rug question. Sitting at the front desk was my father’s general manager, Johnny Jones (no relation).

“He has gone to pick up the keys to a house where there has been a suicide.” replied Johnny. “He will be back soon.”

When my father returned to the shop, he began to assemble the gear needed for the proper cleaning and disinfecting of the scene.

“Where are you going?” I asked.

“To clean up a suicide,” he replied.

My father paused, the earth ceased to rotate, time stood still, then my father looked me in the eye and said, “If you ever tell your mother, I will wear your butt out,” and he meant it.

Sometimes you look back on your life and it’s like watching a Quentin Tarantino movie in reverse. Today, I know that the three main reasons my father allowed me to accompany him on this incident (suicide) clean-up were as follows: 1. I spent the summers on my grandparent’s working farm, so I understood the cycle of life. If we were going to eat chicken for supper, you had to kill, clean, and dress them. If we were going to have bacon or ham, well, we had hogs. I think you get the drift. 2. No one would be at the incident site. And last but probably the biggest reason, I got to go… 3. My mother was out of town.

“Now son,” my father said, in a very calming tone of voice, “If any of this starts to bother you at any time, just walk away and go outside, it’s okay.” 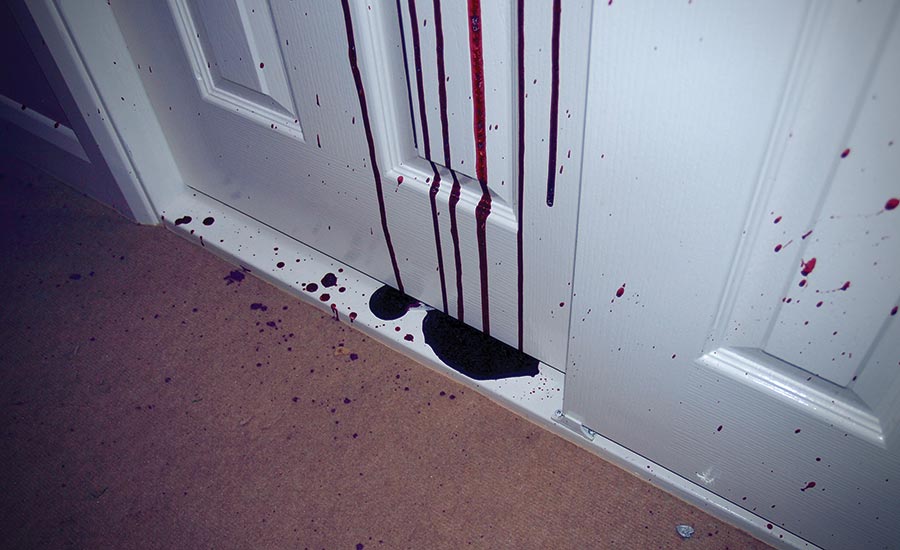 Now my little 13-year-old mind was racing. If any of this starts to bother me? Just what was I about to see? The scariest thing I had been exposed to at this point in my life were the universal monster movies like Frankenstein, the Wolfman, Dracula, and the Mummy.

At this point in my life, I had only seen one dead person. It was a friend of my grandmother, who I had never met before. Mrs. Smith (name changed), who was quite elderly, had passed away in her sleep. My grandparents took me along with my younger brother and sister to the open casket visitation on a Friday evening after all of the cows were milked and farm chores were done. The visitation room seemed large to a 10-year-old and there were only a handful of adults who seemed to congregate together while we three kids sat away from them and spoke in whispers. “Go up there.”, “You go up there.”, “She looks asleep.”, “I think she moved!”, “Shut-up!”

As my father pulled into the driveway, I was startled back to reality. My father put the truck in park, engaged the parking brake, turned off the engine and began to speak to me in the calmest reassuring voice that I had ever heard. “Son,” he began, “we don’t know why, but for some reason the person who lived here lost all hope and took their own life last night by shooting them self in the head in the master bedroom. Now Jeff,” he continued, “we are going in there to not just clean, we are going in there to help this family, and we are to do this in a very respectful manner. Son, I want you in the same frame of mind that you would have if you were in church, and this means no talking. I will do all the work, you just hand me things and do as I ask. Do you understand?”

My father then handed me a pair of Playtex Living gloves and told me to put them on. After unlocking the front door, I followed my father as he moved through the house. As we entered the master bedroom, I began to observe the remains and effects of what that a firearm can do to the human cranium. I was 13.  I was on my first death scene clean up, and I had just taken “a turn in the road.”

Next chapter of the “Forensic Files: A turn in the road”: I grow up and so does the industry.

The Forensic Files: The Perfect Storm

Infectious Disease 101: YOU Create the Protocol

Jeff Jones | Microbial Warrior | is a Certified Bio-Forensic Restoration Specialist® as well as a Certified Forensic Operator® with 50 years of field experience in Forensic Restoration®. He is a former US Army Solider, Former SWAT team leader, and the youngest person to attend the FBI Academy in Quantico, Virginia. Jeff is a Certified Crime Scene Track Investigator as well as a Certified Search and Rescue Tracker. He is a past president of the Restoration Industry Association, was the first chairman of the Forensic Council and is co-editor of the RIA Forensic Guidelines, as well as a contributor to the ANSI/IICRC S540 Standard for Trauma and Crime Scene Cleanup. Jeff Jones is one of the founding members of Bio-Sheen Services LLC in Oklahoma City, Oklahoma. Jeff currently serves as Director of Forensic Operations and the Master Trainer for The Global BioRisk Advisory Council. Author and Lecturer, Jeff has taught the protocols and procedures of Forensic Restoration in Europe, the Mediterranean, and Latin America. Jeff is considered by many the most experienced Forensic Restoration® field operator in the world.

The Forensic Files: The Perfect Storm

Infectious Disease 101: YOU Create the Protocol

The Forensic Files: Understanding the Calling