Something occurred to me while watching TV the other night.  My favorite game show was on - you know the one – a long-running hit game show that features families feuding with each other by guessing how 100 men or women responded to a given question.  At the end of the show, during the “fast money” round with real money on the line, the host asked for an answer that just struck me.  The host indicated they’d polled 100 women, and asked them to “name something that’s required to change a flat tire.”  I really like this show, and it’s the wide variety of strange, quirky characters the families bring to Hollywood that make it entertaining.  Long story short, even the clueless, bug-eyed bother-in-law, and the crazy, kind of trampy aunt from the ‘hood knew that a “jack” and a “lug wrench” were the obvious tools for the job – nailed it #1 and #2 respectively for the $20,000.

Could you change a tire with just any wrench?  Would a pipe wrench work?  Hmm, not with my truck tires – without that lug wrench I’m stuck.  How about that jack?  Can you even change a tire without one?  In our business, restoration contractors face the same question every day.  What tool best fits the applications involved in architectural restoration?  Fire damage, failed coatings, mold growth, flood damage, and water staining are just a few of the applications that might require a tool like media blasting.  I get calls at least once a week from contractors asking what blasting tool to use for a given application.  With big money on the line, it’s important to know which tools fit the application, and which ones don’t.

Recently a customer called with a situation involving massive, wide-spread mold growth in a new home construction project.  When a builder used wet lumber – a result of massive rains at just the wrong times – it caused a massive outbreak of mold growth in a complicated custom home.  See photos 1 and 2.  The customer demanded action – thorough and complete remediation!  Many budget-minded remediators might run to the chemical closet for a chlorine or peroxide oxidizer hoping to kill the mold and lighten the staining on the wood.  This contractor recognized that his clients were not only demanding a non-chemical solution, but a protocol based on the science of source removal.  The clients were also concerned about the use of chemicals - agents strong enough to kill.  Mold remediation with dry ice blasting remains one of the most effective methods for removing mold, hyphae and the staining it causes on many building materials.  See photo 3.  Blasting dry ice pellets with compressed air abrasively removes the mold, allowing a simple, follow-up vacuuming of the surface to provide a thoroughly clean surface.  As most know by now, the dry ice leaves no secondary waste to add to the task of clean up.  This tool is a known producer on mold losses. 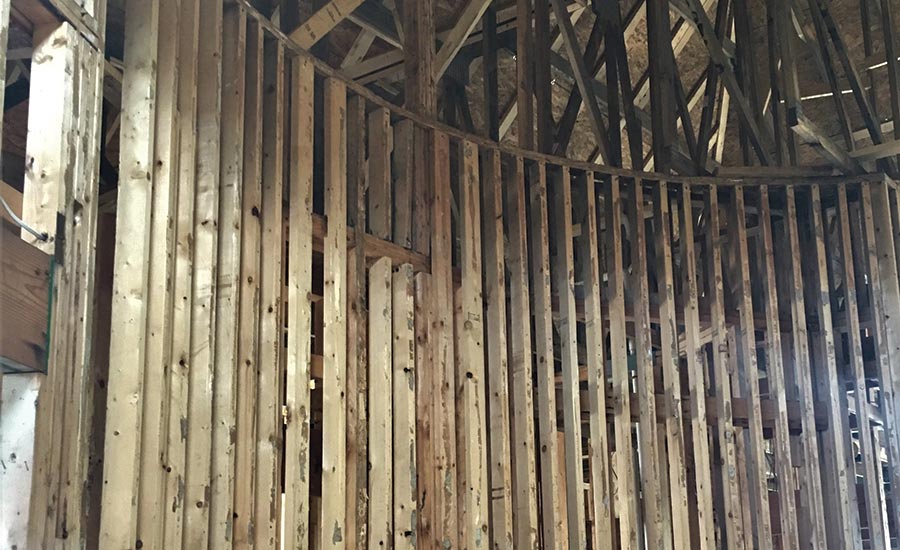 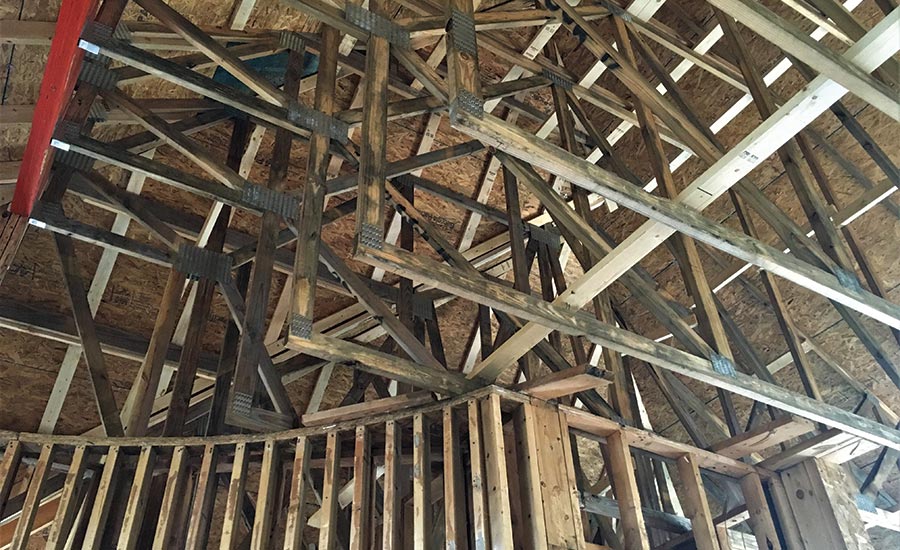 Baking soda is another media blasting tool that has proven its worth.  This go-to tool in the chest is known for the ability to remove heavy soot, and light charring from wood, metal, and masonry – both interior and exterior.  See photo 4.  This process could just as well be known, however, by another characteristic – the ability to neutralize odors.  The by-products of a fire loss – soot and charring – actually change in pH with the introduction of baking soda into the structure.  When someone refers to “neutralizing” odors, this is what they mean.  Certainly, the process has its down-side – a tremendous amount of dust – but remember that this dust is the agent that penetrates the structure, eliminating the offensive “smoke” odor.  In addition, most fire losses are larger and involve an entire structure, rather than just one area – lessening the need for zone containment.  Remember also that media blasting of any kind is a demolition tool.  Demolition requires containment and requires clean-up.  Applied properly, in the right fire loss, baking soda blasting is a big money tool. 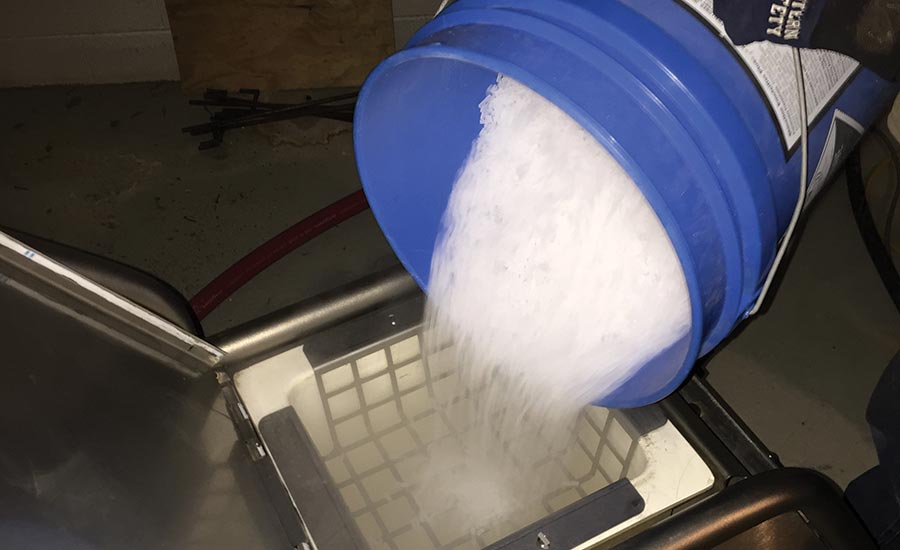 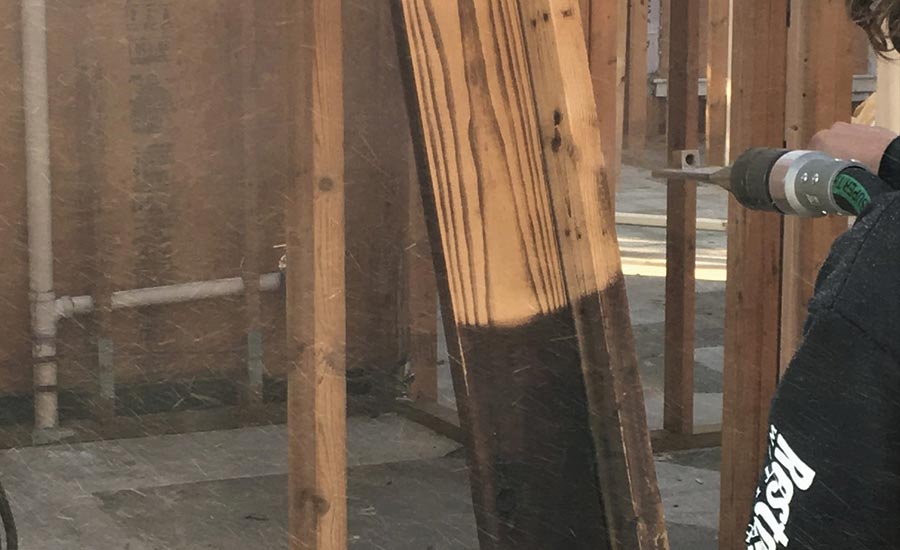 While baking soda and dry ice blasting are certainly tools that have a proven track record, there are new tools in the chest.  Just a few years back most log homes were blasted using corn cob meal – an agricultural by-product with a low cost, and a great reputation as a blast media.  One thing about using a by-product of another, more valuable, product is that you must consider what happens when the flow of that by-product dries up.  When the demand for oil and gas increases, so does the demand for ethanol, and its source product – corn.  I know, ethanol can be produced from the fermentation of just about any green plant, but the truth is America makes ethanol from corn – lots of it.  This fermentation is not just kernels, but the whole thing; the corn, the stalk, and yes, the cob, too.  When this happens, the availability of cob meal gets tight, and prices for what’s available go up accordingly.  Cob media that regularly sold for $0.18 per pound (or less), can now easily sell for $0.50 per pound, or more. 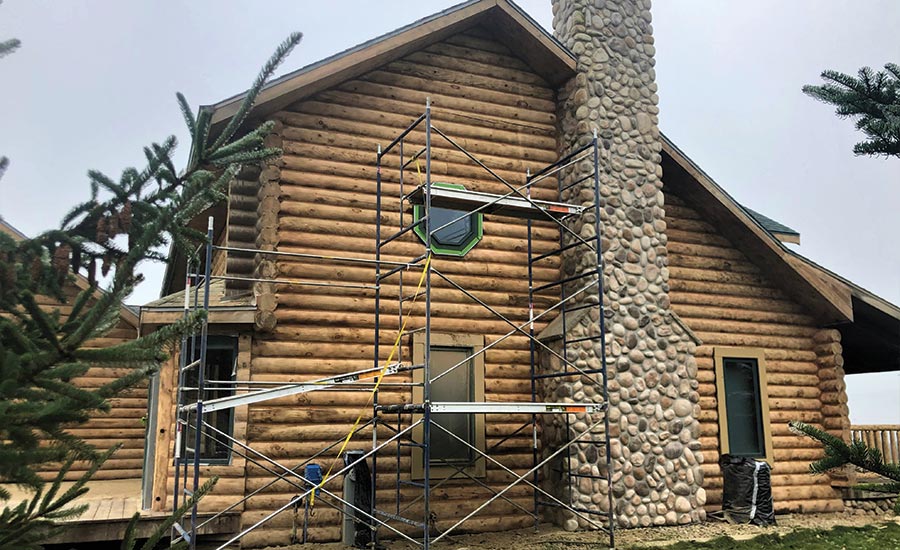 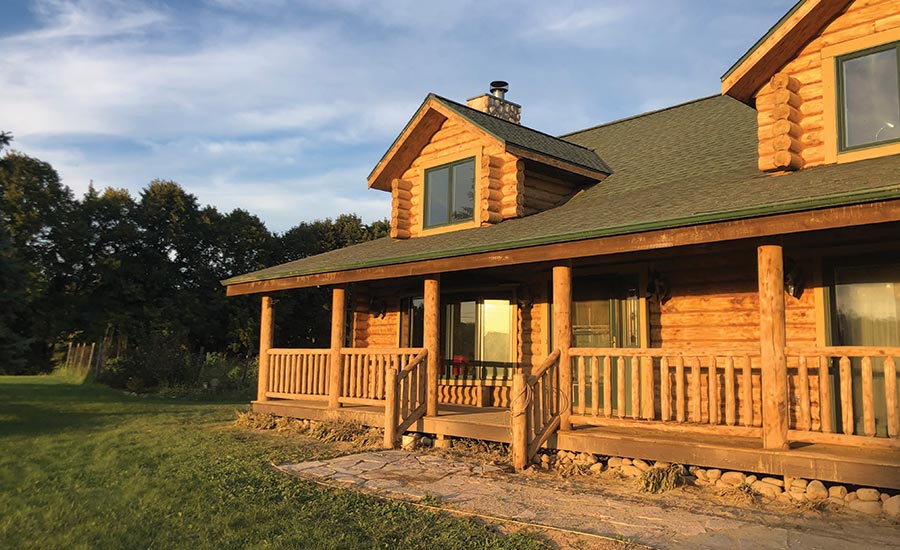 At the same time that cob meal was losing its luster, crushed glass media was finding its place in the market place.  Mainly bottle glass – with 80% coming from beer bottles, I’m told – crushed glass is inexpensive, and available anywhere glass is recycled.  Combine this readily available, inexpensive media with a new breed of blasting equipment – vapor blasting machines capable of nearly dustless blasting – and you have a versatile new tool in the restoration tool chest.  While I don’t know the exact numbers, I do know two things; 1) a great many log homes are now blasted using vapor blasting and crushed glass instead of corn cob.  See photo 5. And, 2) we sell a great deal more crushed glass today, than corn cob meal.  Log home restoration is just the tip of the iceberg when considering this new process, but it’s definitely a big money tool.  See photo 6. 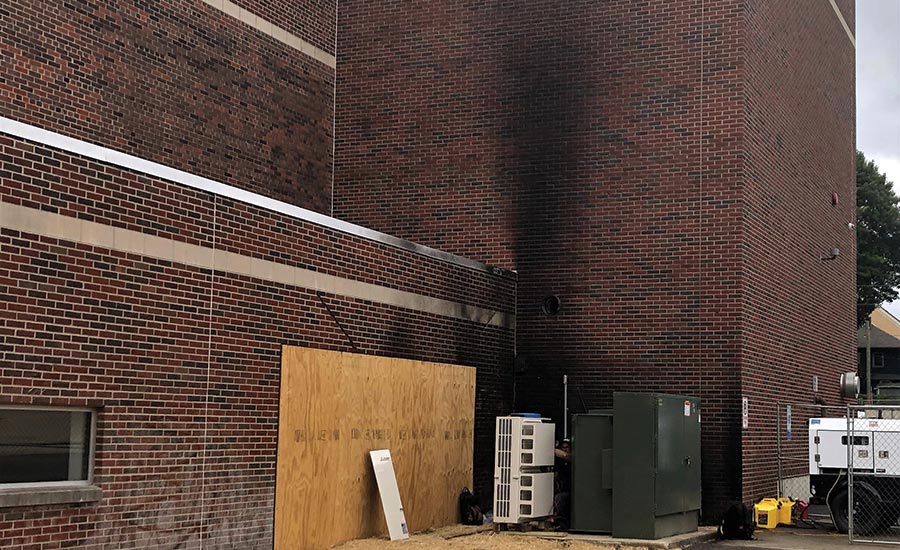 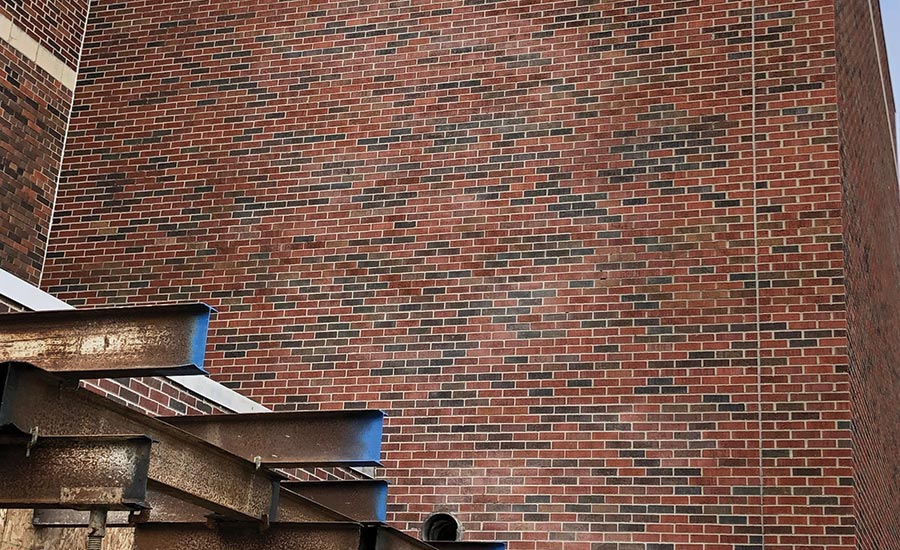 A recent call from Perfection Cleaning & Restoration in Freeport, Ill., highlighted the versatility and effectiveness of this fairly new process.  A drunk driver had crashed into the main electrical transformer for a local public school.   Among other things, the resulting fire caused a great deal of fire and smoke damage to the exterior of the structure – over 1,000 square feet of damaged brick.  See photo 7.  The project manager also added a requirement that the restoration not allow blasting dust and debris to migrate beyond the worksite.  Vapor blasting uses water – about 8-12 gallons per hour in some equipment - in combination with crushed glass media to blast with 95% less dust than dry blasting, giving rise to the nickname for this process; “dustless” blasting.  Crushed glass is an effective abrasive, yet surprisingly non-damaging.  With the water acting as a buffering agent, it reduces damage to substrates like masonry, structural wood, many types of siding, the aforementioned logs, and most building materials.  See photo 8. 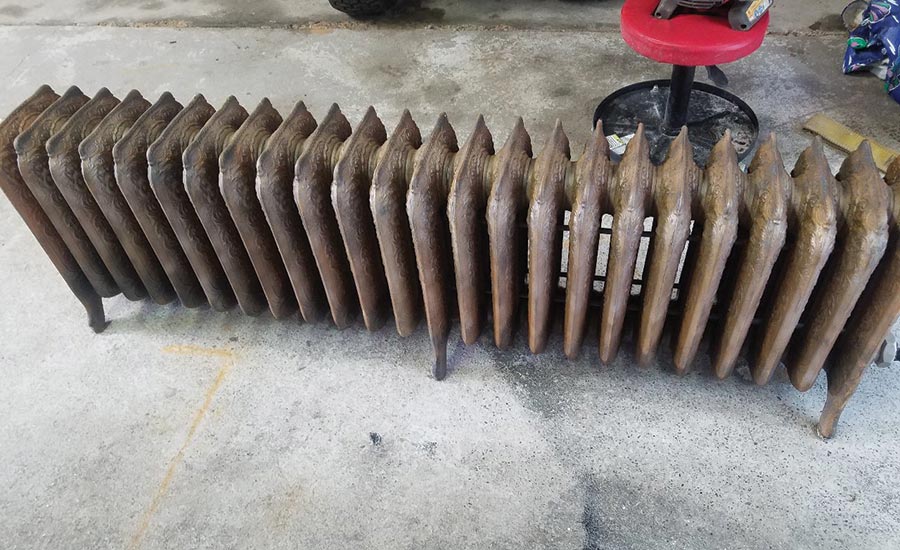 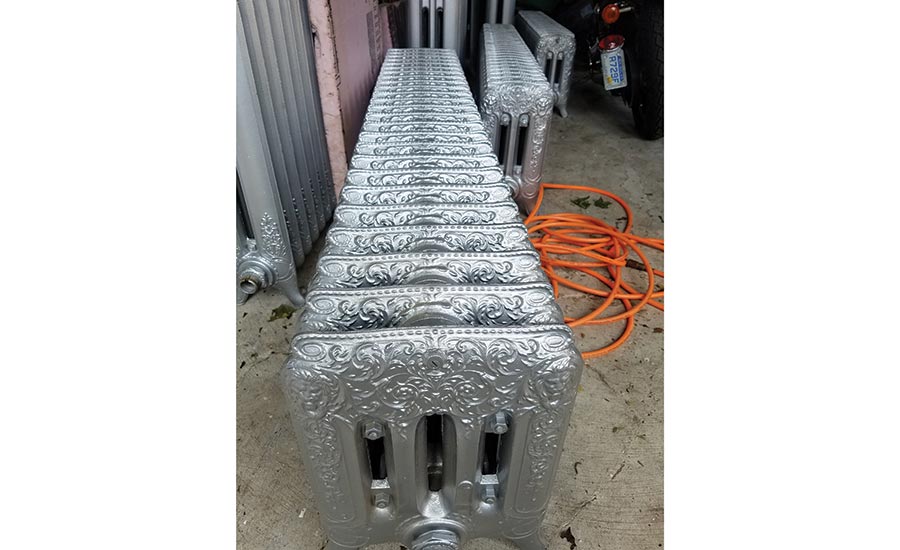 Like your own favorite tool in your own toolbox, vapor blasting is a tool that performs more than just one task.  Blasting with wet media can really expand the boundaries of your restoration horizons.  Rarely does a customer purchase a blasting system without asking me, “what else can we do with this?”  I’ve always answered with the same response – two things you can do; 1) expand what you do for your current customer base, and 2) find a way into new customers, maybe the industrial base around you.  I have to also admit, it helps to have an ace up your sleeve.  Vapor blasting doesn’t use glass exclusively, but many different media.  From baking soda, to walnut shells, to harsh slag abrasives, vapor blasting stretches your restoration ability.  Refinishing historical metal components (See photos 9 and 10) is just one example of this tool’s versatility for your current customers.  Industrial customers can also offer a distinctly new and different revenue stream for restoration contractors.  Blasting industrial applications – whether a municipal wastewater plant, or a local manufacturer’s processing tanks (See photo 11) – vapor blasting can expand your business by providing others with a dustless alternative to traditional media blasting.  See photo 12. 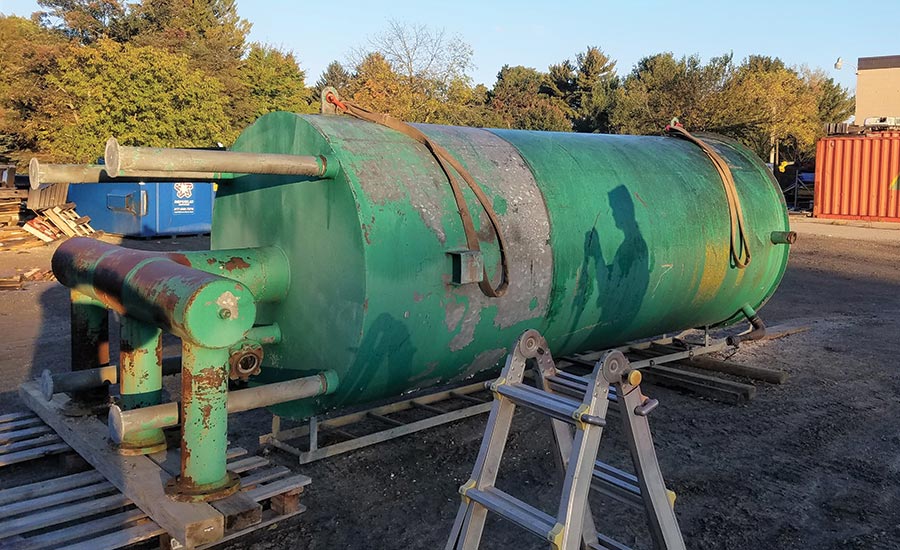 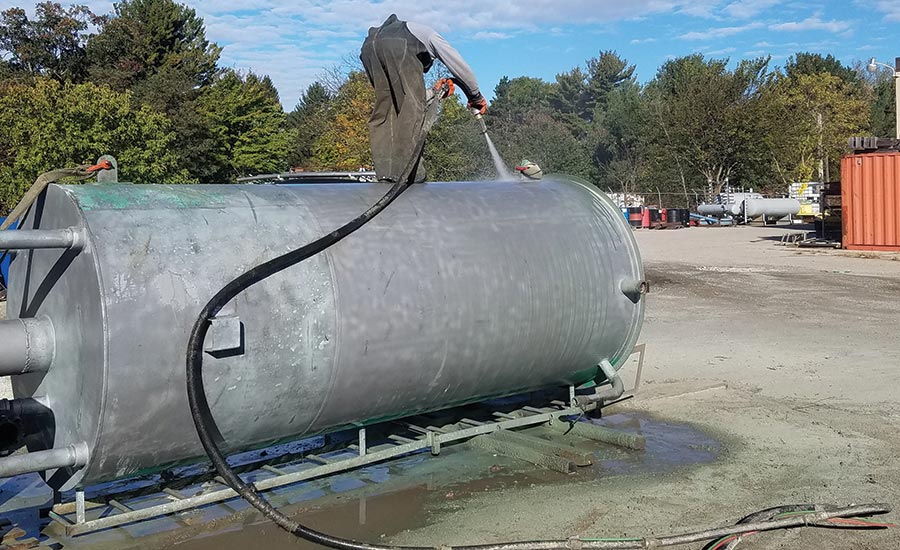