Steps to Successful Adoption of New Technology in Your Restoration Business

Don't shoot yourself in the foot; burn the boats instead.

Change and evolution rarely come easily or naturally for an entire company. As the founder and CEO of Next Gear Solutions, I have spent years helping thousands of restoration contractors do one primary thing: drive major change in their business. These changes are usually about more than implementing new software or technology; at its heart, they are about changing the internal culture so that the company operates like it never has before. I have witnessed many of these change initiatives; some thrived, others died. I’ve watched company leaders shoot themselves in the foot by wavering when change got tough. A single differentiator stands out to me, the thing that made all the difference between success and failure: absolute commitment.

The level of commitment I’m talking about has been well represented throughout history. Consider Spanish explorer Hernán Cortés: When he arrived to present-day Mexico in the early 1500s on an expedition to find treasure, he famously ordered the ships of his fleet to be burned. The message was clear: there would be no going back until riches were found. Rather than demoralizing his men, his actions had the opposite effect, inspiring the members of his expedition to succeed in the face of all difficulties.

A more modern, and perhaps uplifting, take on this concept is best illustrated by NASA and immortalized in the movie Apollo 13. In short, failure was not an option.

Set your Wayback Machine for the late 1960s. The Russians had already beaten the U.S. to space a decade ago and NASA is now all-in for what was dubbed the Space Race. An entire agency of thousands of people—mathematicians, system engineers, computer programmers, literal rocket scientists, and the astronauts themselves—were united in a commitment to a singular goal. It was a shared commitment that allowed no room for halfhearted attempts or lukewarm buy-in. It was a commitment that cemented America’s dominance in space exploration and ushered in a technological revolution.

History is full of memorable examples like these. Everyone remembers Rear Admiral David Farragut at the Battle of Mobile Bay, right? “Full speed ahead and damn the torpedoes.” Or Intel’s leap of faith moving from a business strategy centered on memory storage to the microprocessor that defines the company today. It was a visionary pivot that changed the face of modern technology. 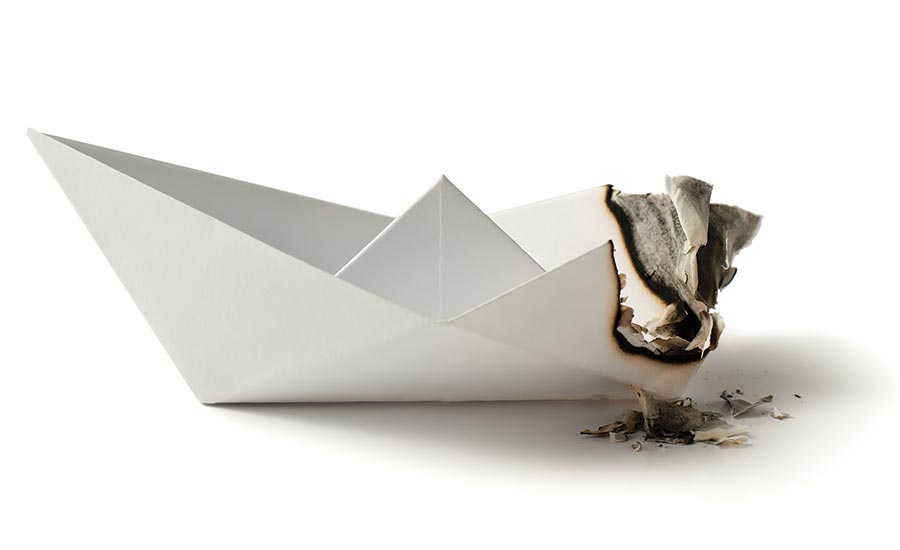 But more than just dusty lessons from the past, these examples have a lot to offer in terms of the focused commitment needed to run a successful restoration company today.

Consider the software central to your business operations. It’s more than just tech—it’s a way for you to manage your processes, to manage your vision. Simply put, good software is a pathway to operational excellence. Now say you’re changing it all up. Growth and improvement—and the accompanying change it brings—is difficult and you’ll inevitably hear objections: The new direction won’t work. It’s too hard. It will take too much time. In truth, not changing is easy, so timidity and inertia will combine in favor of the status quo. You’ll stagnate while your competitors thrive.

Now, a strong leader absolutely listens to wise counsel, but if you don’t stay true to your vision, you may start doubting your course of action, become disoriented, and return right back to where you started. Rather than displaying strong leadership, you’ll demonstrate to your team that you aren’t willing to follow through on the hard decisions needed to make the company-transforming progress that positions you for success against the competition.

If you are about to make a significant change, especially around software and technology, these five steps are essential to aligning your team to your vision.

If you’re going to burn the boats, make sure you picked the right destination. Making the wrong choice here will mean you have to make an about-face, and fully committing to your course of action the next time will be even more difficult. So how does one pick the right destination? Study trends, read white papers, talk to your contacts in the industry. This is the time that listening to wise counsel is crucial.

2.  Articulate your vision early and often

No one likes to work under a leader who operates on whims, and you can’t expect your team to work toward a common goal when they aren’t entirely clear on what it is. Make sure everyone in the company—your VPs, your project managers, your sales team, even your receptionist—knows the ultimate destination. Make your vision a central part of the company story that is known and understood by everyone.

3.  Explain there is no turning back

Of course there will be speed bumps, roadblocks, and detours along the way. But make it clear at the outset that no amount of difficulties will cause you to turn back. Remember, failure is not an option. When uncertainties arise or complaining begins, be quick to reiterate your vision, the ultimate goal, and the company’s dedication to getting there. Don’t hesitate. Don’t turn back. Not even a little. Full speed ahead, and you know what you can do with the torpedoes.

4.  Be willing to make tough decisions

Not everyone will be as committed to your vision as you are—that’s to be expected. Not everyone will be willing or able to do what it takes to make it to your destination with you. Not only will they try to turn back, but they’ll do their best to bring others with them.

5. Celebrate your victory—then get ready to do it again

Once you’ve accomplished what you set out to accomplish, celebrate! It’s a meaningful goal that you’ve achieved. You’ve made a positive change, maybe improved your company culture, and positioned your team for future successes. Bask in the glory and make sure your team has the opportunity to do the same. But then gear up and get ready to do it again. There are more boats to burn.

Garret Gray, President and Chief Executive Officer, Next Gear Solutions. With experience in all levels of the industry, Garret has analyzed much of what is not normally focused on, which is the process of restoration from a workflow perspective. He has pushed the industry towards automation through technology and Six Sigma principles. Garret has worked for several years with over 400 different contractors in North America, analyzing baseline processes and implementing intuitive and efficient solutions. Garret formed Shift, a consulting company,  in the summer of 2007 and has been transforming restoration contracting with the help of his talented and dedicated team. Garret formed Next Gear Solutions in 2008 in response to the need for growing technology and imagination of the current landscape. Next Gear currently has over 100 talented employees spread all over the United States and Canada.