Air traffic control towers are the most visually striking aspect of any airport. These tall, funnel-shaped structures are the focal point for the movement of aircraft over all the taxiways and runways, as well as in the air for a five-mile radius around the airport. Generally, the narrow “stem” part of an air traffic control tower is unoccupied as there is only room for the elevator, emergency exit stairwell, and some storage space. As the tower flares out at the top, the bigger floors are crammed with electronic components, HVAC equipment, radar units, and other material necessary to support the work conducted in the glass-enclosed “cab.”

For this particular project, fungal contamination was first identified in the tower at a major metropolitan airport. This happened during a routine safety inspection nine years before the problem was finally resolved. For nearly a decade, multiple attempts to rid the facility of the mold were conducted without a full understanding of the complexity of the problem. These efforts were characterized by inadequate protection of the building occupants.

During one remediation attempt, a combination of chemical residue and fungal contamination was driven toward the cab by the air pressure created as the elevator ascended to the top. This contaminated air sickened over a half-dozen individuals that were trying to deal with airplanes and adverse weather conditions. The hospitalization of the individuals in the cab resulted in the shutdown of the airport, with the diversions and delays rippling through the entire region.

Even the seriousness of this event did not result in proper diagnosis and correction of the problems. While efforts continued to sort out the mold problem (or convincing occupants that the problem had been corrected), individuals in the building continued to have their health compromised. This culminated in a federal arbitrator ruling that one of the controllers had been permanently and totally disabled by his mold illness; a precedent-setting decision. The continuing ill health effects, along with the negative publicity and political pressure generated by the poor building conditions, highlighted the need for a new approach. 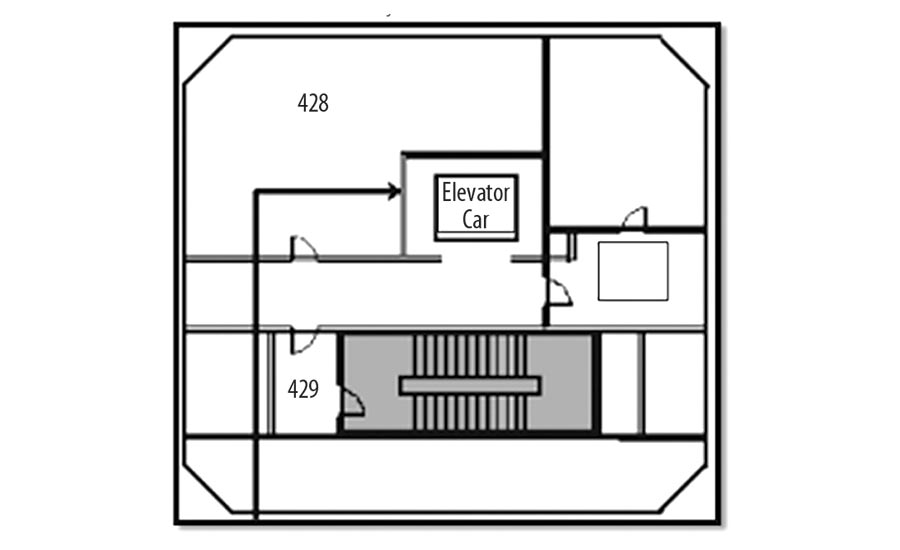 The lower section of the tower is uniform in layout with an elevator shaft in the center, emergency stairwell, and equipment rooms on either side of the elevator. Photos courtesy of Wonder Makers Environmental

The Power of a Team Approach

Given the history of ill health effects and failed remediation efforts, it was clear that the mold growth in the building was a result of multiple problems. To identify and address these issues, a multi-disciplinary group of nationally recognized experts was formed. It was the combined expertise of eight different organizations and building upon individual ideas and suggestions in a cooperative fashion that resolved the problems.

The eight organizations worked cooperatively to complete a two-year effort focused on the remediation of pervasive mold contamination throughout the air traffic control tower. This work included the removal and replacement of approximately 115,000 square feet of gypsum wallboard material, and nearly 20,000 square feet of 1-inch-thick elevator shaft liner board.  Remediation of the water-damaged/contaminated wallboard was accomplished even as this critical use facility remained operational. The efforts of the team involved work around myriad pieces of equipment that were both sensitive and critical to the safety of the flying public. 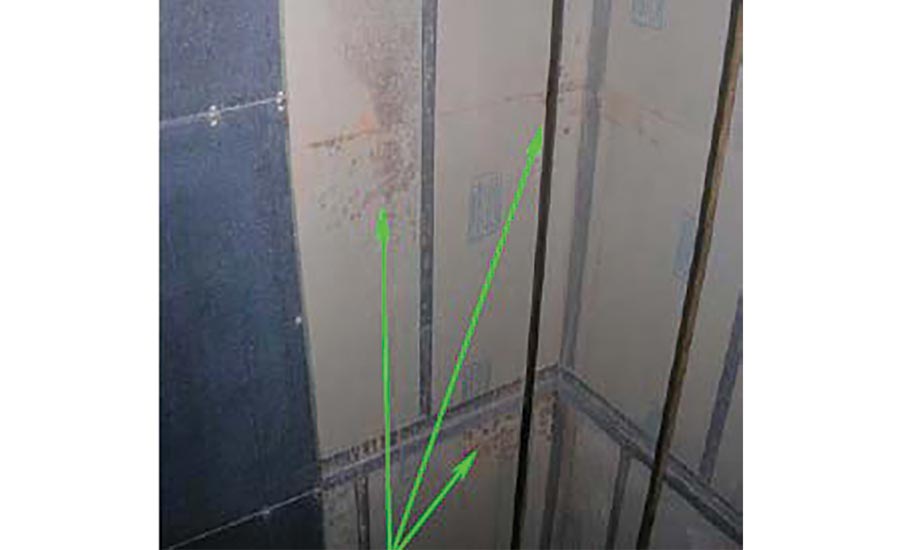 The elevator shaft and finished walls on the exterior of the tower had suffered from water intrusion for years. As a result, mold growth was extensive on all the different layers of the material that made up the walls of the elevator shaft and on the back side of the double-layered gypsum boards which served as fire-rated walls along the exterior of the tower. The arrows indicate significant colonies of fungal growth. Photos courtesy of Wonder Makers Environmental

Due to the extensive nature of the fungal contamination, the entire shaft of an 18-story elevator was disassembled under controlled conditions and then rebuilt, all while the elevator remained functional!  In a similar fashion, the fire-rated walls of the 223-foot-high exit stair shaft were also completely remediated and replaced while maintaining the stairwell as an emergency egress path. 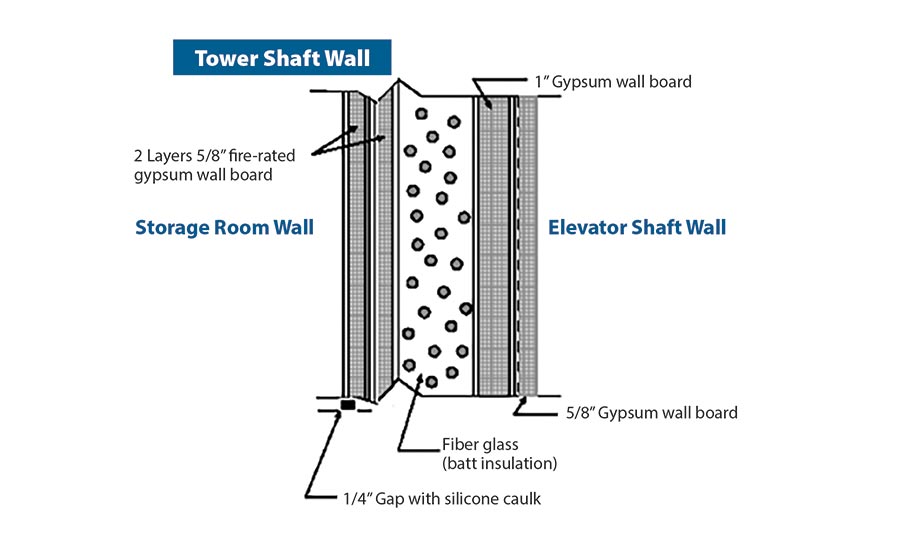 Construction of the elevator shaft involved multiple layers of material, all of which have been water-damaged and were supporting mold growth. Photos courtesy of Wonder Makers Environmental

Major Challenges and Steps Taken to Address the Challenges

The difficulty of conducting a major project that operates around the clock with no days off was resolved through a combination of clear communication of work activities, scheduling of work during times of slower traffic volumes, and enhanced engineering controls to protect the occupants. Night shift work was the norm, with set-up, waste load-out, and move-in of replacement materials scheduled around employee breaks and aircraft “pushes” (periods when the volume of takeoffs and landings were extreme). 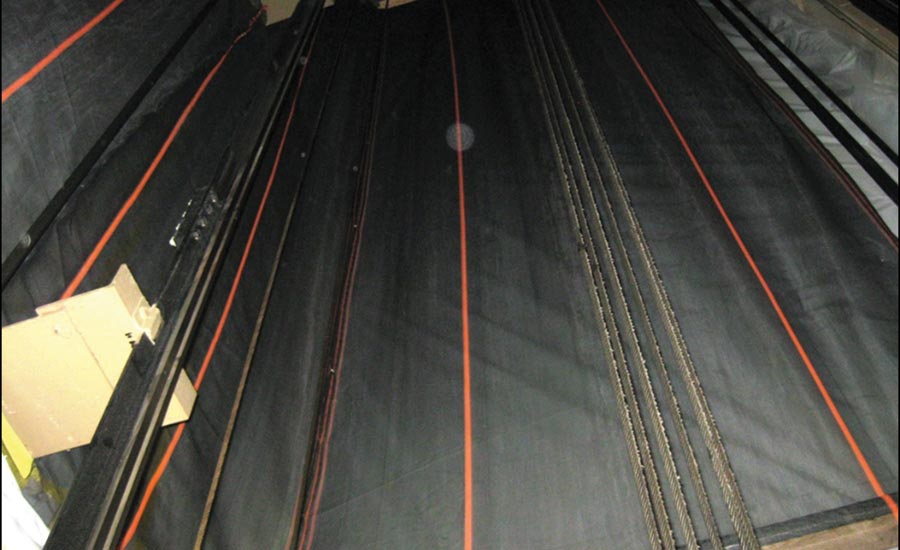 The interior of the elevator shaft was protected on each floor with installation of heavy-duty cargo netting. 20-mil reinforced plastic was sealed to the concrete floors at each level to create an airtight barrier preventing mold contamination from reaching the elevator shaft. The walls of the elevator shaft and liner were then removed from the room side without interfering with the operation of the elevator during peak hours of air traffic. Photos courtesy of Wonder Makers Environmental

Demonstration events were often set up outside the tower so that controllers and managers could actually see the sort of work that was going to be done, evaluate the noise levels, and experience a sniff test of chemicals proposed for that phase of the work. Extra precautions were taken with the setup of isolation barriers to make sure they were airtight. Also, the operation of the negative air machines was to ensure that contaminants liberated during the controlled removal of building materials did not migrate outside the work area.

Major water intrusion points included a poorly detailed flashing at the level just below the cab that allowed rainwater and snowmelt to enter and then move down, following the shape of the structure. The inspectors documented a situation where water from some of these leaks managed to travel seven floors down. Another entry point for water was identified as the joints between the exterior concrete panels. Roof problems were contributing to the interior moisture along with plumbing leaks from roof drains in unmonitored areas and also allowed water to regularly enter the building.

The HVAC system was likewise contributing to moisture problems, as extensive duct leakage (up to 40 percent on one section of the building) allowed conditioned air to cool surfaces above the ceiling tiles and creating condensation spots that supported fungal growth. Appropriate fixes for all of these issues were laid out by the team members so that once the mold remediation was completed, there would be no moisture sources inside the structure to fuel its return.

The long history of fungal contamination meant that many of the building occupants were sensitized to mold. Quite a few of the air traffic controllers were under doctors’ care for a variety of ailments related to mold exposure.  This situation required continuous air monitoring to ensure that air quality was not compromised. More importantly, communication with all parties was the key to protecting both equipment and people. Careful covering, utilization of external power sources, controlled relocation of specific equipment, operation of cutting equipment with dust control measures, and extensive use of negative pressure enclosures were the primary tools to protect the equipment. 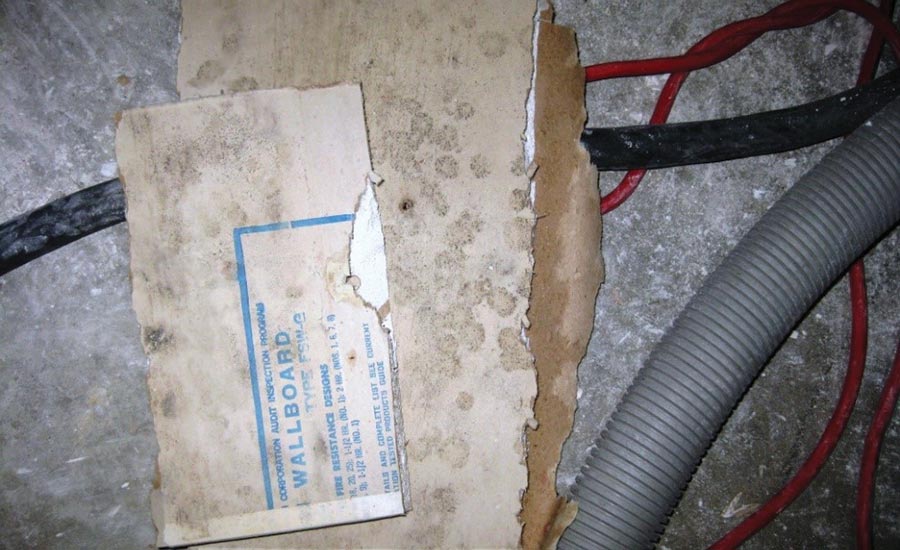 By the end of the project, approximately 115,000 square feet of contaminated gypsum wallboard material and nearly 20,000 square feet of 1-inch-thick elevator shaft liner board had been removed from the tower and replaced with new material.

Throughout the remediation of the air traffic control tower, a multitude of ancillary problems arose which needed to be incorporated into the remediation process. Faulty HVAC controls and motors, damaged fire alarm systems, deteriorated fireproofing on structural steel, metal studs of the wrong thickness used for fire-rated walls, incorrect installation of the elevator shaft walls that left gaps and holes in a critical fire/smoke barrier, and improper installation of drywall and fire-rated assemblies were all uncovered during the mold work. By the time all of these problems (and more) were addressed, it turned out that the mold remediation and build-back constituted approximately 1/4 of the total cost of the project (roughly $5,000,000 of the $22 million project).

An entire second article could be written related to the creative solutions employed during the mold remediation at this airport tower. Some of the more innovative steps used during this project included: 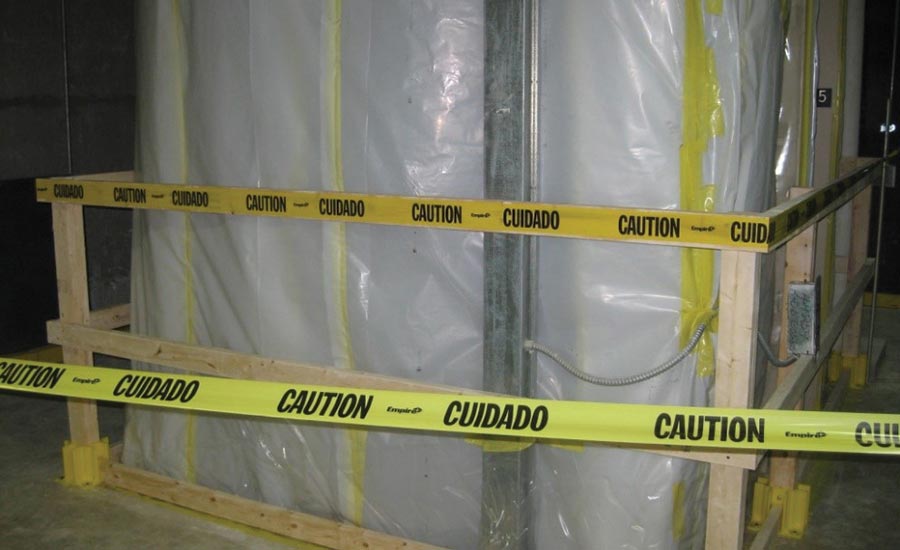 In addition to the mold remediation, extensive safety precautions had been utilized to prevent material, equipment, or individuals from falling into the elevator shaft once the wall materials were removed. Photos courtesy of Wonder Makers Environmental

Perhaps the most unique aspect of the project was that prior to the start of work, there was a multi-year history of mold-related health problems. Previous uncoordinated remediation attempts not only failed, but badly damaged the trust between the building occupants and the building owner.

Despite these potential pitfalls, a dedicated team worked cooperatively and professionally to gain the trust of all parties involved. They completed an extremely complex remediation and rebuild project while delicately balancing the three goals of occupant health, protection of critical equipment, and safety of the flying public. After more than two years of work, the air traffic control tower looks the same as it did before, but the men and women who protect all of the air travelers through their skillful decisions and directions no longer have to protect passengers at the expense of their own health.

Michael A. Pinto is chief executive officer of Wonder Makers Environmental, Inc., a manufacturing and environmental consulting firm that specializes in identification and control of asbestos, lead, IAQ, mold, industrial hygiene, and chemical problems. Mr. Pinto is the author of over 230 published articles and several books including, Fungal Contamination: A Comprehensive Guide for Remediation and Forensic Restoration: Procedures to Protect Operators and Occupants.

He completed doctoral course work in environmental engineering and holds numerous certifications in the environmental and safety areas, including Certified Safety Professional, Certified Mold Professional, and Certified Forensic Operator. In addition to being a frequent speaker at industry events, Michael has been honored with such prestigious awards as the Golden Quill, Martin L. King Award, and the Phoenix Award for Innovative Restoration from the Restoration Industry Association. He serves as an Emeritus member on the board of the Environmental Information Association (EIA) and on the President’s Council of the National Organization of Remediators and Microbial Inspectors (NORMI).

For over 40 years Michael Pinto has provided professional safety and industrial hygiene services related to a wide variety of indoor contaminants. He can be reached at map@wondermakers.com or (269) 382-4154.
You must login or register in order to post a comment.