What Does Clean Mean?

During a structure fire, toxic smoke, volatile organic compounds (VOCs), and particulate matter are generated from the vast array of building materials, contents, and household products that combust. These chemicals mix and interact with each other to create a vast array of carcinogens, poisonous gasses, acids, and other toxins that can cause acute and chronic illnesses, cancer, and even death. Some are so toxic that the EPA has designated them as having a zero level of permissible exposure limit.

Clothing, textiles, and other types of soft goods often act like VOC sponges and are highly susceptible to smoke saturation, retention, and contamination during and after a fire, which prompts the question; can clothing and other types of soft goods damaged by smoke really be completely decontaminated and restored? Can ozone, laundry detergents, and dry-cleaning chemicals remove and/or neutralize every one of the thousands of chemicals that may be created in a fire? If so, how can the consumer be assured the restoration techniques are effective and the cleaning chemicals themselves are safe?

In the restoration industry today, soft goods, clothing, and textiles that are exposed to asbestos, lead dust, sewage, blood-borne pathogens, or mold, are typically considered a total loss. Items damaged with contaminants such as these are typically inventoried, and then discarded. However, in many cases when clothing or soft goods are exposed to highly toxic chemicals, gases, PCB’s, and particulates generated by a fire, many of which are far more toxic than asbestos, lead, mold, or other contaminants, a different approach is often taken. Here, the theory is that soft goods and fabrics can be completely sanitized and deodorized by placing them in an ozone chamber for a couple days, using commercial-grade laundry detergents, dry cleaning, and other cleaning methods. But are these methods truly 100% effective in removing all contaminants, VOC’s, and particulates or are the proponents of ozone and the manufacturers of cleaning chemicals not telling us something?

Like the snake oil salesmen of the 1800’s, proponents of ozone make it sound like it is a miracle elixir that can cure all the ills of smoke damage and remove every particle, chemical, and contaminant. If this is true, then why does the EPA state the following? “There is a large body of written material on ozone and the use of ozone indoors. However, much of this material makes claims or draws conclusions without substantiation and sound science. Often the vendors of ozone generators make statements and distribute material that lead the public to believe that these devices are always safe and effective in controlling indoor air pollution. For almost a century, health professionals have refuted these claims.” 1 The same holds true for many of the chemicals used in the restoration industry, many of which have not been thoroughly researched or studied. 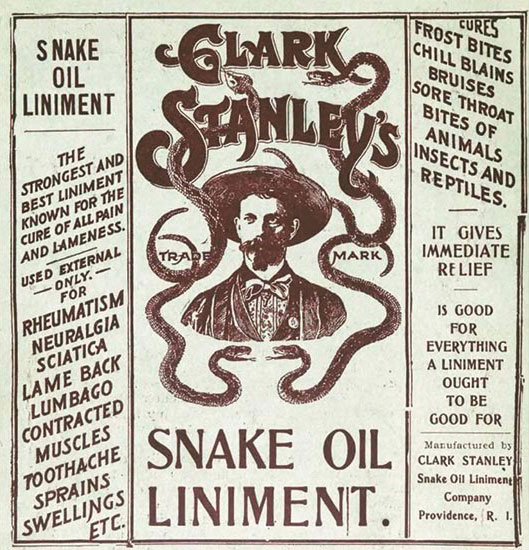 WHAT DO WE KNOW?

Research has barely scratched the surface on identifying the tens of thousands of chemicals that can be created in a structure fire and even less is known on what cleaning agents or methods are truly effective to clean, restore, and/or decontaminate smoke-damaged soft goods. So, how do we know for sure when items contaminated by smoke and sent to be cleaned aren’t contaminated or when they are returned to be used or worn? If toxic chemicals and particulates generated by a fire are known to be human health hazards or carcinogenic through inhalation or absorption through the skin, then restoration and cleaning companies should have some method to scientifically verify that the restoration was truly successful, right?

If you were to send smoke damaged baby clothes to be treated with ozone and cleaned, is there a possibility that toxic particulates laden with harmful chemicals could be trapped in the fabric? If so, could these toxic particulates be absorbed by a baby’s skin and cause a reaction, sickness, disease, or worse? The answer is a resounding yes! 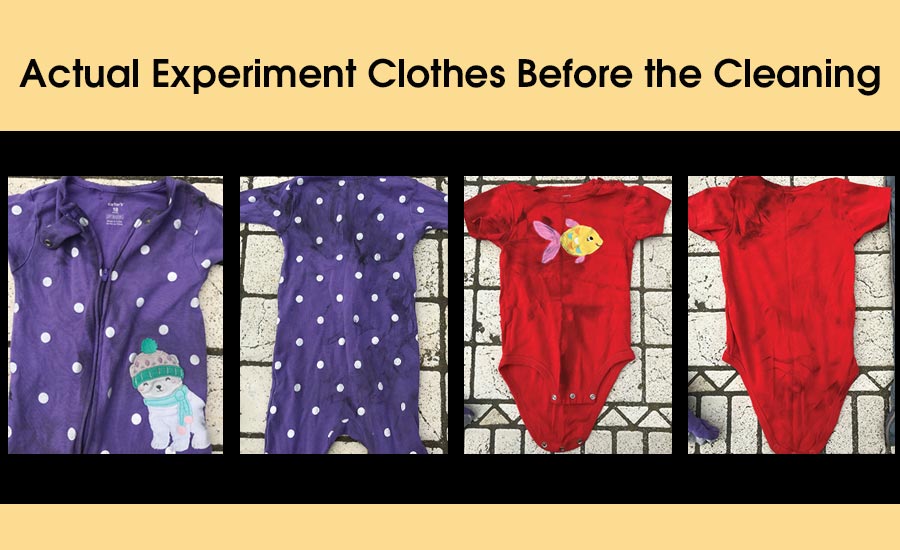 Most restoration practitioners rely on physical appearance and the sense of smell to determine whether something is clean or not.  However, the real dangers lie in what you can’t see or smell. Although an item may appear clean and have a fragrance that some identify as clean, the real dangers are toxic VOC’s that may be camouflaged or microscopic particulates that may be embedded in the material. 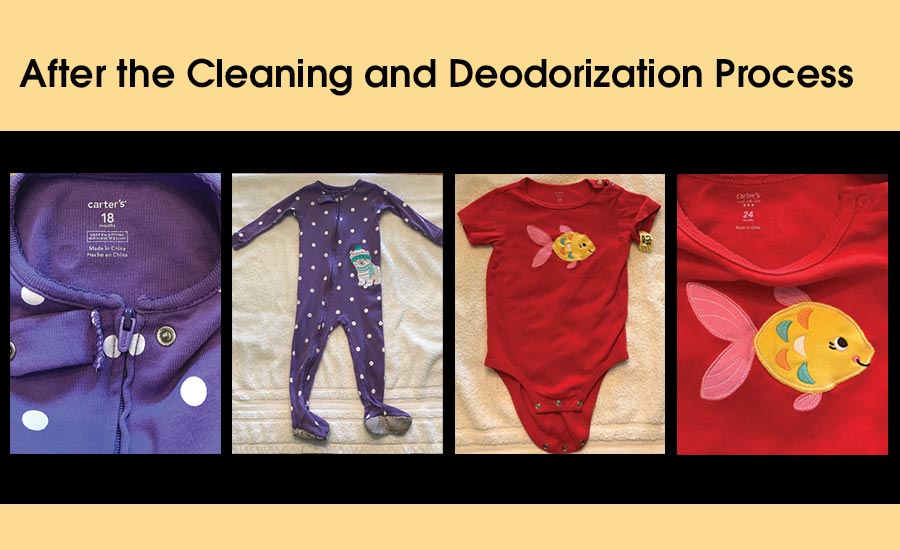 MY OWN EXPERIMENT RESULTS – A MAJOR CAUSE FOR CONCERN

Recently, I conducted an experiment where I sent a couple articles of smoke damaged clothing to a leading textile restoration company to have them cleaned and deodorized. The articles were a pair of toddler’s purple polka dot pajamas and an infant’s red onesie. Both articles had been in a house fire where a ground floor bedroom was completely gutted and the remainder of the home had moderate to heavy smoke damage throughout. Both articles were taken from a room that was furthest away from the fire source and both had a very pungent smoke odor.

Prior to accepting the clothes for cleaning, the textile restoration company assured me that they could completely deodorize and clean them. The articles were subsequently placed in an ozone chamber for 48 hours and laundered. A few days later, I received the clothes back and they looked like new and had a pleasant smelling detergent fragrance as one might expect. 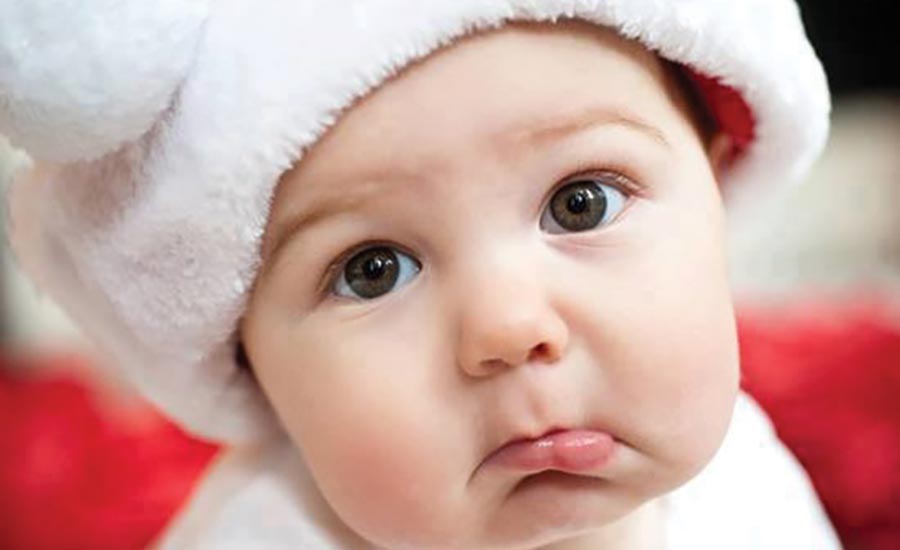 Although the articles looked clean and smelled like what you might expect as a “clean” smell, I wanted to find out scientifically if the methods used to restore the clothes might tell a different story. So, I submitted the articles to a forensic laboratory that specializes in testing for chemicals and fire VOC’s, to see if the combination of ozone and the cleaning processes truly restored the clothes or if there were any VOC’s or chemical residues left behind that might be of concern.

A week later, I received the analysis report from the lab and my suspicions were confirmed. Toxic chemicals had been discovered in the fabrics that were byproducts of combustion attributed to the fire, some of which were odorless. In addition, there were chemicals that may have come from the cleaning solutions, detergents, or the chemical reactions caused by exposure to ozone.  Above is the actual list of chemicals and heavy metals that were discovered in the clothing, many of which are known to be extremely toxic to human health from either inhalation or contact with the skin.

A layperson would assume a specialized textile restoration company would use methods that would not only be effective, but safe once the processes were completed. In addition, you would also think that a piece of clothing that went through such a vigorous cleaning process would most certainly not have any hazardous chemical residues such as those found in the clothes in my experiment.

Children’s early developmental processes are easily disrupted. Rapid, complex, and highly choreographed development takes place in prenatal life and in the first years after birth, continuing more slowly throughout childhood into puberty. In the brain, for example, billions of cells must form, move to their assigned positions, and establish trillions of precise interconnections.  Likewise, development of the reproductive organs is guided by a complex and precisely timed sequence of chemical messages and is shaped by maternal and fetal hormones. 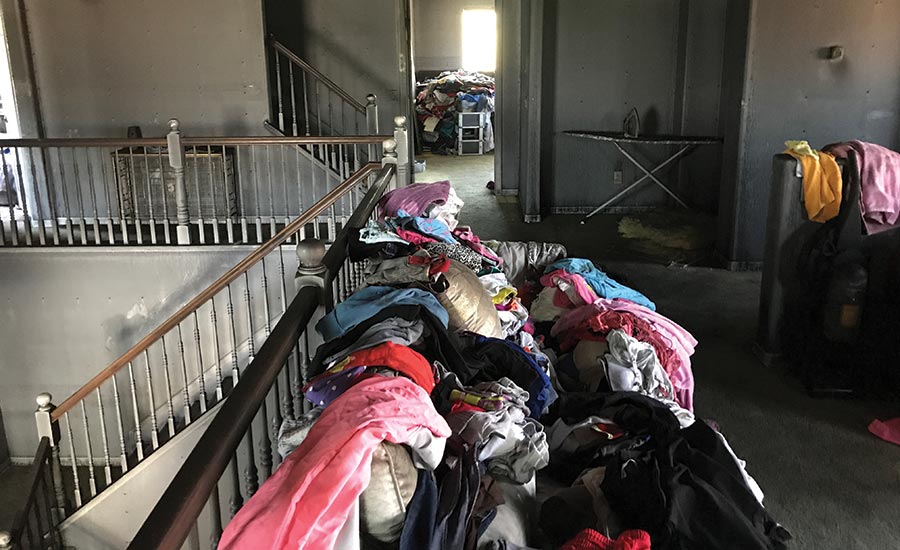 This is the location where the sample clothes were taken.

Recent research in pediatrics and developmental toxicology has elaborated the concept of “windows of vulnerability.” These are critical periods in early development when exposures to even minute doses of toxic chemicals, levels that would have no adverse effect on an adult, can disrupt organ formation and cause lifelong functional impairments.

If, for example, cells in an infant’s brain are injured by lead or a toxic chemical, the consequences can include developmental disabilities in childhood and possibly increased risk of neurological degeneration, such as Parkinson’s disease, in adult life.  If inappropriate hormonal signals are sent to the developing reproductive organs by a synthetic chemical endocrine disruptor, such as certain chemicals commonly found in household products, plastics, and cosmetics (phthalates), and on clothing (flame retardants), lifelong reproductive impairment may ensue.

Children have more time than adults to develop chronic diseases. Many diseases triggered by toxic chemicals, such as cancer and neurodegenerative diseases, are now understood to evolve through multistage, multiyear processes that may be initiated by exposures in infancy.2 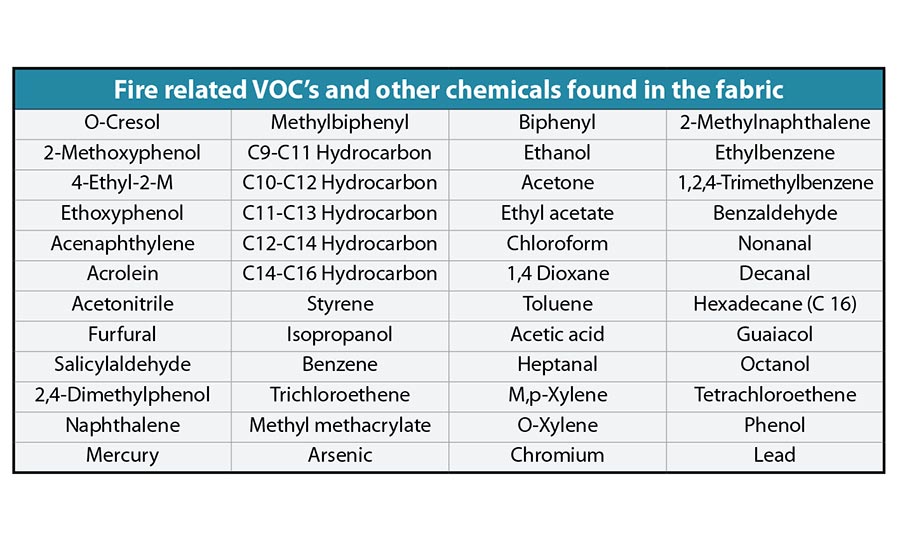 Given my findings, I suggest before cleaning an entire house full of smoke damaged clothes or textiles, that a couple sample articles be test cleaned and then analyzed by an independent laboratory to see if the cleaning and deodorization process works. If the sample articles come back free of toxic residues or VOC’s, then the cleaning processes are effective, and the customer can rest assured that his or her soft goods have been properly restored.  However, if the items come back contaminated, then you may need to reevaluate the cleaning methods altogether.

So, what does clean mean in terms of restoring someone’s clothes or soft goods to a pre-loss condition? Is it even possible with today’s techniques? If the end result of using ozone and whatever cleaning chemicals that were used by the textile restoration company in my experiment leaves similar residues of toxic chemicals, then most smoke-damaged textiles may simply have to be considered a total loss.

Consider this: when homes or buildings are contaminated with asbestos, lead, mold, sewage, or other hazardous contaminants, a testing laboratory will typically test the surfaces, areas, rooms, and/or air after the cleanup is completed to certify that the restoration and cleaning processes were successful in removing the contaminants. This is commonly known as a final clearance test. Textiles, especially clothing exposed to fire or smoke related contaminants should without question be tested in like manner to insure they are safe to use or wear.

Without having textiles tested, people could be exposed to a wide range of chemical exposures and health risks.