Restorer's Perspective: The Benefits of 360 Photos in Restoration

In today’s restoration climate, documentation is the name of the game. There are continuous innovations in technology in the restoration industry, including how we take and store photos of our jobs. By taking 360° photos, upon arrival at the property, the 360° camera documents condition and damages to the property – and gives you the ability to look back later at every single angle and square inch of space. Explaining to the owner that you are taking photos of everything in the area can eliminate complaints and reduces the potential for fraud by the property owner.

One of the major benefits of using 360° photos is that it saves time on scoping damages and allows for creating a more accurate estimate by reviewing the photos while preparing the estimate. The 360° camera captures everything visible in the area in an instant. Also, by rotating and zooming in and out, others within a company reviewing documents and estimates can see everything for themselves in a way 2D images don’t allow. This opens the door for those in-house reviewing estimates to see if anything was missed, and make sure the estimate and scope of work are on par before submitting it to the insurance company or adjuster. Taking final photos after the project is done can also ensure, in a whole new way, the project was done right. 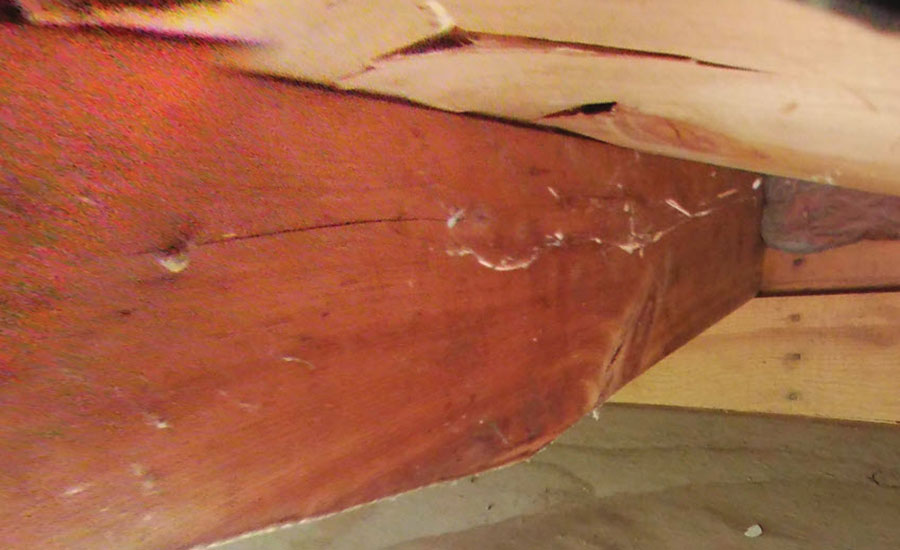 This is damaged roof sheathing. A camera was placed inside the soffit after a tree fell on the roof. Photos courtesy of Norm Richert

I now use the 360° camera on every claim. This technology has allowed me to decrease the amount of time on every claim and provides greater details than standard digital photos. Previously, I used to take the photos, measure the damaged areas, and then wrote notes on everything that was needed to restore the property. Now I take the 360° photos, measure the damaged area, download the 360° photos and review the 360° photos while I prepare the estimate. There are two computer monitors on my desk and I review the 360° on one monitor and prepare the Xactimate estimate on the other monitor.

These photos can show a large area or can be used within inches of the object for a close-up view of the damaged area. A 360° camera takes photos upside down, horizontal, and of course right-side up. Since the camera can be used in any position, using the camera on a selfie stick, it is easy to obtain information off data plates on water heaters, furnaces and air conditioners.

On major losses, I upload the 360° photos to a website and send an email to my client (the insurance company) with a link to the website, so they can now see exactly what I saw during my visit to the insured property. This allows the client to view the 360° photos, adjust the reserve, and be on the same book and page when the insured has questions. To be more transparent, I have also shared the 360° photos with the insured to allow them to view the condition of their roof or damages. 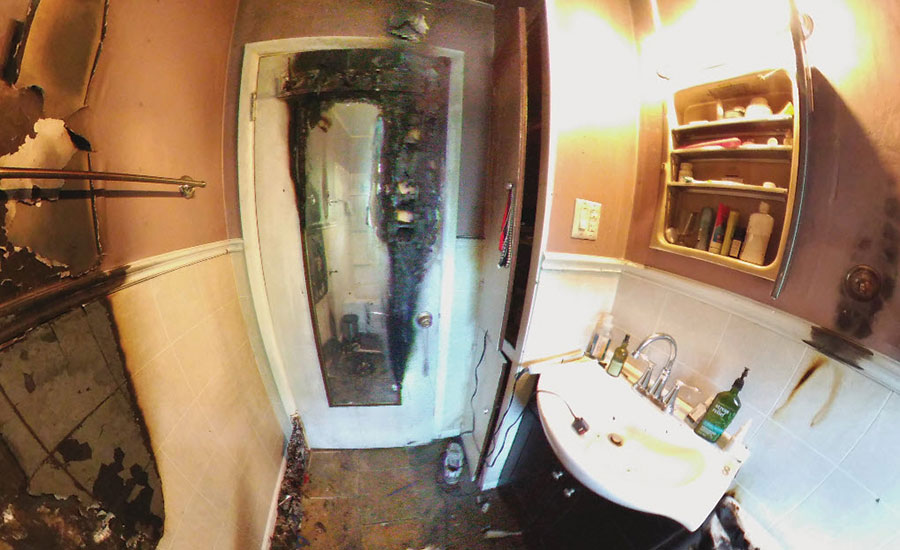 Smoke and fire damage in a small bathroom. Photos courtesy of Norm Richert

Using the auto setting on the 360° camera works for most photos, but changing the setting on the camera can make a difference between a not so good photo and a usable quality photo. 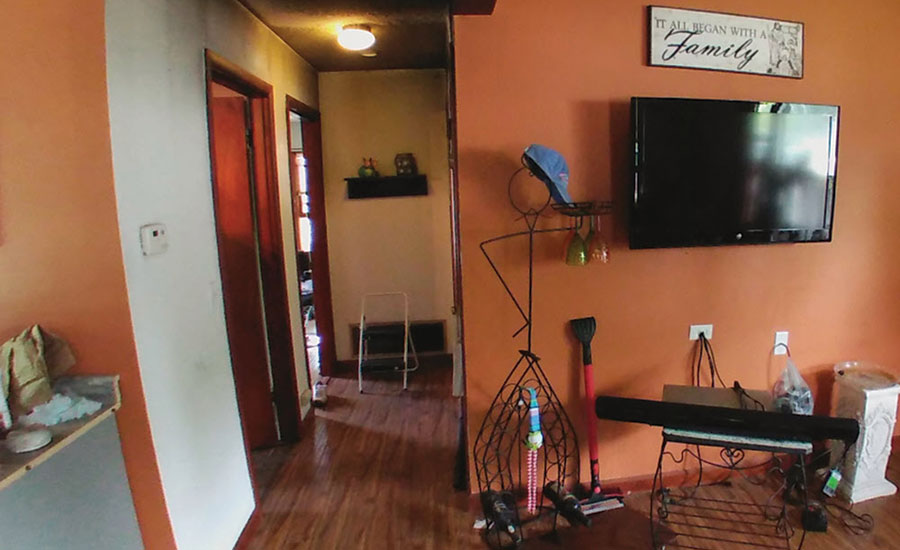 Smoke damage in a hallway and living room. Photos courtesy of Norm Richert

The cost of a camera is about the same as a good quality digital camera. All the features of the 360° cameras should be evaluated before deciding which one to purchase. Additional equipment likely includes a tripod, selfie stick, and a smart phone (camera is activated from an app on the smart phone). 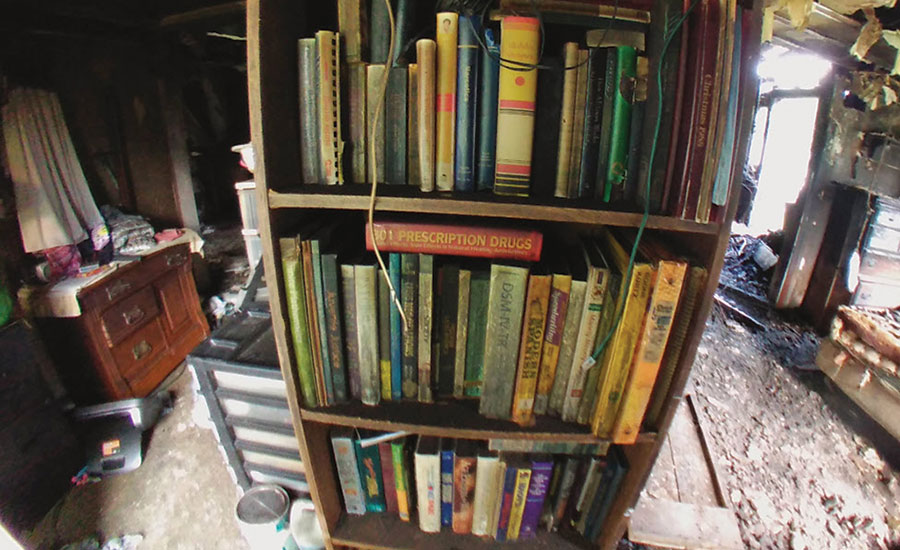 Even personal property, like this bookcase, can be documented with 360° photos.

For taking photos in fire damaged building or dark areas, several battery-operated LED lights will be necessary to get good usable photos. To view the 360° photos, which are large files, an SSD (solid state drive) in the computer allows for moving the images faster and zooming in and out.

Norm Richert owns and operates Central Consulting & Adjusting, and has been adjusting claims in Central Missouri for the past 37 years. He recently renovated a building listed on the national historic register, which was built in 1855 that had extensive water and mold damage. For additional information on 360° photos or to view the latest uses of the 360° camera, send an email to norm.ccas@socket.net.

Restorer's Perspective: The Gathering of Professionals

Restorer's Perspective: The 3 R's of Mastering Xactimate for Beginners

Hiring in a Challenging Market: The Power of Non-Traditional Benefits

Understanding the Proper Use of Moisture Meters: Chuck Boutall

Clerk of the Works ® Time and Materials Software