This website requires certain cookies to work and uses other cookies to help you have the best experience. By visiting this website, certain cookies have already been set, which you may delete and block. By closing this message or continuing to use our site, you agree to the use of cookies. Visit our updated privacy and cookie policy to learn more.
Home » Wisconsin Paul Davis Franchise Wins NARI Award for Fire Restoration Project
Fire and Smoke Damage RestorationRestoration and Remediation Industry News 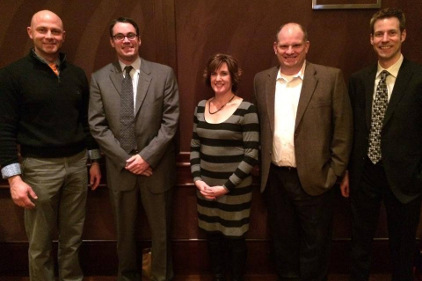 The National Association of the Remodeling Industry (NARI) has named Paul Davis Restoration and Remodeling of Southeast Wisconsin as a winner in a variety of 2013 Wisconsin Remodeler Award (WRA) categories, according to a press release. Specifically, the company was honored with a Gold Award for the Bourbon and Tunns Tavern in the Disaster Fire Restoration category. Paul Davis also won Silver awards for remodeling projects.

The awards were presented for projects completed in the Milwaukee area in 2013. The company's project management and marketing team members accepted the honors on January 17 at the annual Milwaukee/NARI Wisconsin Remodelers and Local Achievement Awards banquet held at the Intercontinental Hotel in Milwaukee.

"We are honored to accept the awards for projects that were judged by an impartial panel of experts within the industry and allied fields," said Dan Druml, president and owner of the local Paul Davis franchise office. Awards were based on problem solving, functionality, aesthetics, craftsmanship, innovation, degree of difficulty and entry presentations.

Specifically, the WRA 2013 Gold award was presented for Paul Davis' high-profile fire damage and remodeling work at the historic Bourbon & Tunns Tavern in the Third Ward. The three-story bar, restaurant, banquet hall, kitchen and basement of the Tavern was severely damaged by a late night chemical fire in the basement. The fire burned for 30 minutes without a source of ventilation, which allowed the fire to smolder throughout the 7,860 square foot building.

Paul Davis was immediately called upon for emergency services, along with fire, soot, and smoke damage restoration, and odor removal. The company completed extensive and complex repairs, restoration and remodeling throughout the structure. Additionally, the electrical system was updated while addressing code and convenience factors. The remodeling project represents Paul Davis'

award-winning design and construction achievements in southeast Wisconsin for more than 20 years.

For more information, visit the franchise website at www.pdwisconsin.com