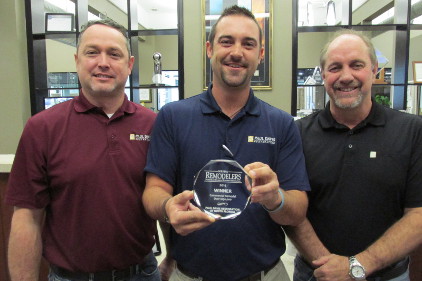 Mike and Marguerite Mumford, owners of Paul Davis Restoration of North Florida recently received the Northeast Florida Builders Association (NEFBA) 2014 First Coast Remodelers award for a commercial remodeling project over $250,000, according to a press release. The honor was presented for Paul Davis’ outstanding restoration and remodeling work on the Biscottis restaurant fire damage project which occurred in January.

The annual NEFBA recognition event was held on December 4 in Jacksonville with Paul Davis and other local company projects judged by a panel of remodeling industry professionals who reviewed the submission on aesthetic appeal, craftsmanship, quality, unusual constraints, overall design and functionality, materials, special features, and architecture.

Specifically, Paul Davis’ winning project featured an extensive restoration, repair, reconstruction and remodeling job at Biscottis, 3556 St. Johns Ave. in Jacksonville. The project began on January 23 when the Paul Davis office received a phone call from restaurant co-owner Karen Tucker about a large kitchen fire. In 1993, Tucker and co-owner Barbara Bredehoeft opened the restaurant as a 37 seat coffee house. It is now a landmark success and seats 100 in the historic Avondale area of Jacksonville in a beautiful turn-of-the-century brick and wood interior building.

Upon notice of the fire, Paul Davis immediately had an emergency mitigation crew on-the-scene. The total property damage of the fire was valued at close to $500,000 causing significant smoke damage throughout the entire restaurant business. The high-profile fire at the popular dining and bar establishment was devastating with a significant concern about getting the restaurant back in business quickly, so the restaurant staff could resume their livelihoods.

According to Paul Davis’ Project Manager Ned Beatty, the most unusual constraint involved in the Biscottis job was the amount of time required to complete the project due to the restaurant’s business needs. To accomplish the quick job completion, Paul Davis hired and trained restaurant employees to help with the mitigation cleaning, inventory documentation and contents restoration as a beneficial and creative solution for all parties.

The restaurant was formally opened just 12 days after the initial start of work. While Biscottis reopened, additional finishing work was required for the building to be restored to its original condition. For the next two months, Paul Davis crews worked at night with some power and use of generators after the restaurant employees left at 11 pm. Crews worked through the night and early morning hours until 8 am when the chefs started their work to prepare for the day.

According to Beatty, the Biscottis insurance adjuster indicated the job was impressive for any contractor to get the business open in 30 days. For more information, visit the local office website at www.pdrestorationnf.com.