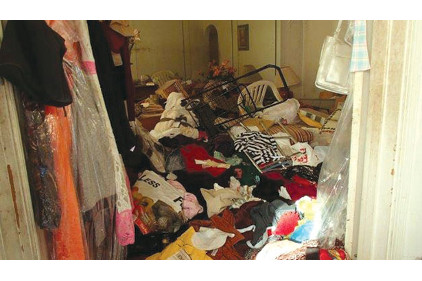 This fall, ServiceMaster Restore entered into a partnership with Matt Paxton, “Hoarders” TV personality, cleaner and author, to expand the reach of the franchise’s hoarding and estate cleaning services across the country. As part of the partnership, Paxton will help ServiceMaster Restore with training and consultation and the franchise will help provide additional staff to assist with handling hoarding cases.

“We often talk about restoring people’s lives,” says Tom Coba, ServiceMaster Restore president. “The similarity is there for the hoarding business, estate cleanup, as well as the work we do every day with restoration, whether it’s a small homeowner’s job or some of the major catastrophes.”

It’s a significant partnership regarding hoarding services, which is becoming a popular add-on for disaster restoration businesses – a direct result of hoarding becoming more popular and accepted by everyone else. For instance, six months ago the American Psychiatric Association (APA) made hoarding an official disorder. The awareness is there, compared to how little there was of it 10 years ago.

But hoarding cleanup is about a lot more than what meets the eye.

“The bigger issue is the quality of the person that you send into these homes,” Paxton says. “It’s a unique mix of compassion and muscle to work with a hoarder – you can’t just throw stuff away. It’s actually the complete opposite.”

Here’s a look at more of what Paxton had to say about handling hoarding:

R&R: So you say that hoarding is about a lot more than just “throwing stuff away.” Care to expand on that?

Paxton: Most of your readers will look at this and say, “It’s thrown away trash – we can do that, it’s really easy.” That’s where you get in trouble right away. The timeline of a job lasts a few days, but a real successful job actually starts three months beforehand. You might have 10 hours of communication with a family member before we even walk into the house. You’ve got to learn everything about the hoarder; you’ve got to learn about their situation, you’ve got to learn about the dangers of the house. It’s not just five days of cleaning. It’s actually five weeks ahead of time and then, believe it or not, another couple (of) interactions with the hoarder after the cleaning is done. It’s a much larger, much broader communication cycle, where most people just focus on those (few) days. If you’re just focused on those few days, you’re actually harming the hoarder – you’re not helping the hoarder at all. The house will just fill right back up.

R&R: What measures do you take to ensure hoarding won’t happen again following a cleaning?

Paxton: More than half of our jobs, when a family member calls us, we end up turning it down before we even get into the house – because we know the hoarder is not ready. And that can really blow up a house into a really bad situation – when a hoarder is pushed into doing it, when they’re not emotionally ready.

R&R: Communication is a lot different with hoarding than it is with a restoration job because instead of dealing with adjusters and homeowners, you’re dealing with hoarders and other family members. Talk about this difference.

Paxton:  It’s really a complete understanding of the disorder. And learning how to communicate with the hoarder and then with the family, which are two completely different communication paths. There are about 30 people that a hoarder touches during the week and we make sure that we’re communicating with all of them. It’s really the opposite of just throwing stuff away. It’s a much fuller approach. If you’re just selling a product and you’re just selling a service, it’s not enough – you’ve got to have that compassion side. This is absolutely about helping someone and helping their disorder. They’re absolutely real people. And it’s amazing to see how quick these families’ lives change for a positive manner if it’s done the right way.

R&R: You hear about conventional hoarding and then you hear a lot about animal hoarding – what’s the difference?

Paxton: (Animal hoarding is) the worst of the worst. Cats are a very, very common pet. They require the least amount of effort and give the most amount of love. And that’s why a hoarder keeps it – it makes them feel good, constantly. You don’t find hoarders with 100 dogs. Dogs are really needy and require a lot of work. There’s a lot of chemical and airborne and obviously a lot of physical dangers with these animals. I’ve had parrots. I had one lady that had one hundred and something parrots and they would dive bomb you. We had a guy, we stopped counting at 3,000 rats - we’ve had snakes, one lady had a couple horses in her living room. You never know what you’re going to get. You may think it’s just a bunch of boxes and then there are 400 bunny rabbits.