By Michelle Blevins
As the “Road to the White House” seems to take over the airways these days, there are two major news stories you need to watch.
Tropical Storm Erika 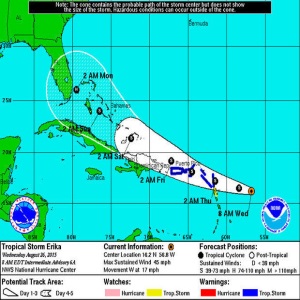 First, let’s talk Tropical Storm Erika. According to the National Hurricane Center, Erika is on track to hit the Florida panhandle by Monday morning. Right now, she’s churning in the Atlantic Ocean, south of Puerto Rico. There are already reports of flash flooding on the Leeward Islands and four people were killed in mudslides on the island of Dominica.  Tomorrow, the storm will travel through the British and U.S. Virgin Islands.
By Monday morning, Erika could gain enough strength to be upgraded to a hurricane. If that happens, Accuweather meteorologists say there’s a chance it could impact the Carolinas and as far west as Louisiana.
Here are some links to help you keep a close eye on the storm, and decide how/if your company should mobilize to respond to a possible disaster scenario:
- http://www.nhc.noaa.gov/refresh/graphics_at5+shtml/084828.shtml?5-daynl
- http://www.accuweather.com/en/weather-news/tropical-storm-erika-marching-1/52021729
Washington State Wildfires
It’s wildfire season in Western states, and Washington State is getting hit hard. The governor has declared a state of emergency. According to U.S. News & World Report, the air quality for the entire city of Spokane (500,000 people) has been declared unhealthy. Forty homes and 40 outbuildings have been destroyed. The fire covers a whopping 438 square miles, and the smoke is so thick at times that aerial support has to be grounded.
As of the morning of Thursday, Aug. 27, the fire was just 17 percent contained and more than 1,300 firefighters were working around the clock to stomp it out. More than a dozen firefighters from Australia have flown in to help. The low level of containment means there is a huge risk for other structures in the path of the flames.
Questions about responding to the aftermath of a wildfire? Here are some sources that can help:
- https://www.osha.gov/dts/wildfires/response.html
- http://emergency.cdc.gov/disasters/wildfires/pdf/wildfiresfacts.pdf
You can also find a whole lot more helpful information on responding to catastrophic losses in this article featuring insights from industry experts Lisa Lavender of Berks Fire Water Restorations and Art Dickerson of Paul Davis National.
Be safe out there, and keep helping people restore their lives!
KEYWORDS: CAT loss natural disasters wildfire damage restoration