The construction industry added 22,000 net jobs in December, according to an Associated Builders and Contractors analysis of data released today by the U.S. Bureau of Labor Statistics. Overall, the industry has recovered slightly more than one million (92.1%) of the jobs lost during earlier pandemic stages.

The construction unemployment rate rose to 5.0% in December. Unemployment across all industries fell from 4.2% in November to 3.9% last month.

“Today’s jobs report has economists shaking their heads,” said ABC Chief Economist Anirban Basu. “Not because it was an especially terrible report, but because the data are so difficult to interpret. The headline number of 199,000 jobs added economywide is deeply disappointing and makes December the fourth month in five that the headline number has fallen short of expectations.

“Dig a bit deeper, and the labor market appears much tighter and stronger than indicated by the payroll growth number,” said Basu. “Economywide unemployment dipped to 3.9% as the labor force participation rate remained unchanged. While it is true that the construction industry rate of unemployment ticked higher, this is likely because of seasonal factors as opposed to a rush of Americans joining the construction workforce.

“While the data are puzzling in many ways, the implication for contractors is reasonably straightforward,” said Basu. “The labor market remains extremely tight going into 2022. Contractors will be competing fiercely for talent. They already have been, according to ABC’s Construction Confidence Indicator, but that competition will become even more intense as dollars from the infrastructure package flow into the economy. Accordingly, contractors should expect another year of rapid wage increases in 2022. Those rising costs, along with others, must be included in bids if margins are to be sustained.” 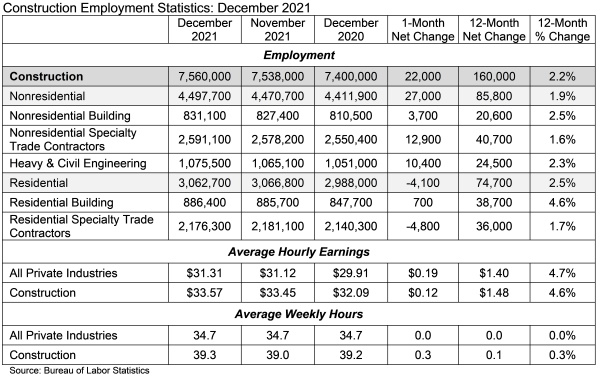