When tackling removal of coatings from brick, wood, and metal surfaces, one of the most challenging materials to remove is lead-based paint. In addition to being difficult to extract, lead-based materials can be hazardous if inhaled or ingested.

A growing number of contractors are turning to wet and Vapor Abrasive blasting to remove lead-based paint and other coatings. Vapor Abrasive blasting systems combine water and abrasive media in a pot under pressure, then inject the mixture into an airstream, providing a precisely controlled system to remove materials resistant to other measures.  Not only does the Vapor Abrasive method generate less dust than dry blasting, but it uses far less water than traditional wet blasting systems, minimizing the slurry messes they often leave behind. This helps minimize containment and cleanup work in the surrounding area.

On a recent building restoration project in Calgary, Alberta, Vapor Abrasive blasting provided an ideal solution to removing lead-based paint. The Ramsey Design Centre, a brick industrial building built in 1919, had numerous layers of paint of various colors applied to brick and wood surfaces over the years. As part of transforming this building into an office building, contractor Wetblast.ca used Vapor Abrasive blasting to remove six or more paint layers from some surfaces and restored the original brick and fir timber support columns, as shown in Figure 1. 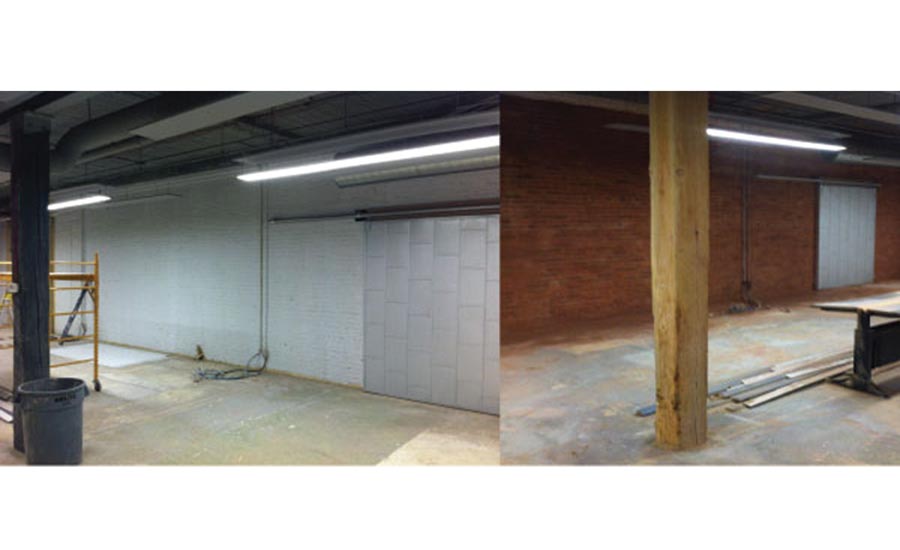 Figure 1: Before and after photos of the Ramsey Design Centre, where Vapor Abrasive blasting was used to restore brick and wood surfaces. (Photos courtesy of Graco)

Wetblast.ca used EcoQuip 2 Vapor Abrasive blasting equipment to handle the Ramsey project. A glass-bead abrasive media and a relatively low pressure of 40 psi were used to remove the paint without damaging the brick substrate. Areas were treated in increments of approximately one square meter each, and the process advanced until each surface was completed.

On another project, Wetblast.ca called on Vapor Abrasive blasting to help restore a rare 1929 passenger rail car and convert it into a dining car, as shown in Figure 2. The project was part of Calgary’s Heritage Park Historical Village, a museum featuring artifacts of Western Canada dating back to the 1860s. The contractor removed nearly a century’s worth of old paint, primer, rust scale, corrosion, stains, oils, grease, dirt and grime, and prepared the metal surface for re-application of new coatings. Both garnet and glass beads were used as abrasive media. 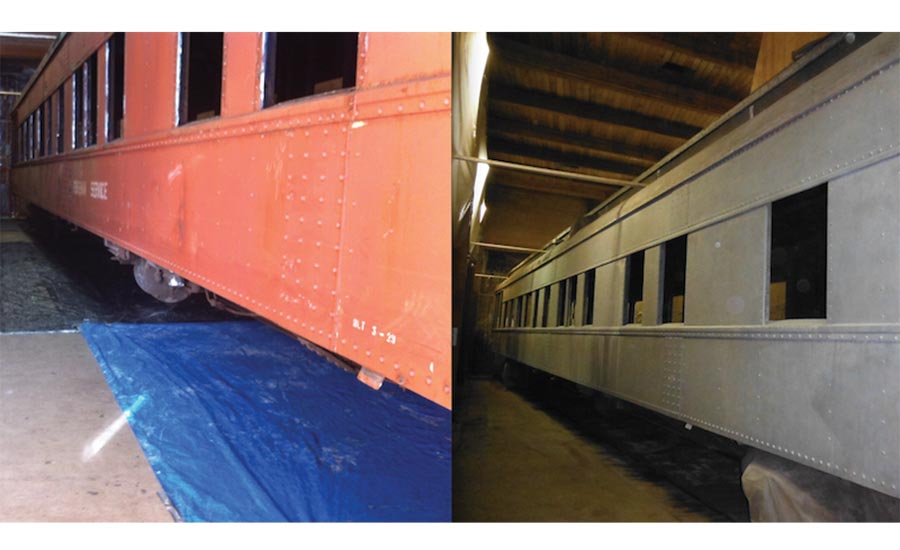 The Vapor Abrasive approach encapsulates individual grains of abrasive material in water, weighing the particles down and providing more mass on the particle at impact. Because dust is minimized up to 92 percent when compared to dry blasting, less containment is generally required and media clean-up time can be reduced. Vapor Abrasive blasting also reduces rebound of abrasive particles, which pose risk to workers and the environment. These factors are particularly important with lead-based paint, which is subject to various  Occupational Safety and Health Administration (OSHA) regulations related to lead exposure.

Even with the vast reduction in dust, preventative measures are still needed with Vapor Abrasive blasting to meet project requirements and environmental regulations. One key measure is to mix a lead stabilization additive with the abrasive media prior to performing the blasting. Additives such as Blastox® encapsulate lead particles, converting lead into a relatively insoluble lead silicate and minimizing the leaching of lead particles into soil. Other agents such as PreTox Paint Stripper can be used to change chemical properties and increase blast production rates when removing lead-based paint.

Containment will still be necessary for these projects. For removing lead-based paints, ground containment using geotextiles or stationary structured containment are used to prevent emissions and debris from escaping the treated area. For Vapor Abrasive blasting, partial containment is usually sufficient, and can be achieved by enclosing the area with tarps supported by a rigid or flexible structure, or a plywood barricade.

Settings for Vapor Abrasive blasting equipment can be adjusted to control the media flow rate and airstream pressure for different applications. For concrete and brick treatment, media flow rates of 75 to100 pounds per hour are common. An initial airstream pressure of 40 psi can be used and increased as needed for thicker layers. The Graco EQp uses approximately 8 gallons of water per hour, far less than wet blasting.

Various types of abrasive media have been used for different situations. Glass beads are generally an effective choice for cleaning and removing paint and light stains without damaging the brick or concrete substrate. Crushed glass can be used if higher abrasive is needed to remove thicker material. Other materials used as abrasives include plastic beads, crushed walnut, garnet, staurolite, and coal slag.

For fire restoration work, glass beads are generally used to minimize stripping wood, though a certain amount of wood stripping is inevitable. Soda additives can be mixed with the abrasive media to minimize odors.

The thorough restoration and minimal dust generation make Vapor Abrasive blasting a natural fit for removing lead-based paint, as well as cleaning, prepping surfaces and removing other coatings and stains. The environmental and efficiency gains make it an attractive option to public and private agencies facing a wide variety of tough cleanup tasks.

Wade Hannon is a Technical Field Specialist for Graco Canada Inc., covering the northwest US, Alaska and western Canada. He has over 10 years of experience in Vapor Abrasive blasting equipment. Prior to joining Graco, he was vice president of marketing and distribution for Geo-Blaster Equipment, which was acquired by Graco in 2014.