Michelle Blevins
KEYWORDS amy shannon / difference of generations / generation mix / manage the generation mix / marketing your home / realtor / Violand Executive Summit
Order Reprints
In June, I had the privilege of sitting in on a class by Amy Shannon at The Violand Executive Summit. She’s an HR guru who truly understands how to “manage the generation mix,” as her class was called, and appreciate every age group for what they bring to the workforce.
Do millennials come off as entitled? Do they long for flexible schedules? You bet. But are they also very hard workers who are dedicated to excelling in their job and soaking up as much knowledge as they can in the process? You bet!
What about baby boomers? They cling more to the traditional workplace, but again there’s nothing wrong with that! They see the traditional workplace – with traditional hours – as the way business is done best. And why should they think differently? That’s how it’s been for their generation in the workforce!
Truly Shannon’s one-day class got my mind whirring thinking about the generations, and for the first time I started to look at qualities of millennials with pride instead of embarrassment. Really, every generation has qualities to be very proud of that really bring important contributions to the workplace – and even day-to-day life. 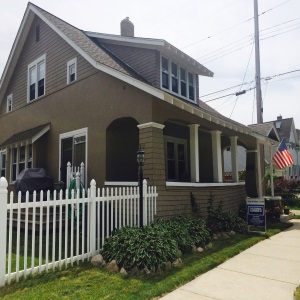 Several months ago, a major communication breakdown led to the eventual demise of a working relationship my husband and I had with the realtor trying to sell our home. Four years ago, he helped us buy the historic Craftsman-style bungalow, which we hoped to be in for years, but chose left behind for new jobs in Metro Detroit. We felt a good connection with him, and trusted his expertise, but there was a difference in opinions, and generations {I would guess he is about 20 years older than us}. After some on-going communication issues {read: there was very littile communication -- and you can’t determine context or tone via text or email}, he decided it would be best if he cut ties with us. We agreed. That was that.
Despite it being a good move for everyone, it gave me that uncomfortable feeling in the pit of my stomach that I couldn’t seem to squelch. Then it hit me: it was the first time I’ve really had a professional, working relationship turn sour. No, I do not get along with everyone {trust me on that one!} – but I’ve never had a relationship completely die. As a people pleaser, it was a tough pill to swallow; but also one I needed to take and use as a learning opportunity.
I’m not sure there’s anything we could have done differently to salvage the relationship, and at the end of the day we do need someone with whom we see eye-to-eye. Since my husband and I both work in media of some kind, we’re both very social-media driven, and understand the importance of marketing – even when that comes to yourself and your possessions! We do not believe the old idea of popping a sign in the yard and running some newspaper ads gets it done. After an open house, I would prefer you call the people who came through – instead of sending a handwritten, personal note to follow-up. Does that mean my preference is right? Not necessarily. It’s a generational difference! I do realize some of those people may have preferred the handwritten note and thought it was a nice touch!
In the end, I think the breakdown was simply a matter of different opinions -- and generations. He viewed certain sales techniques as the way to go because they work for him (and his numbers do prove he's a good realtor!) and we viewed different things as effective because they work for us (we obviously aren't realtors -- and trusted him to work his magic, but struggled with that when we didn't see eye-to-eye). This loops back around to Shannon's class. Millenials like constant feedback and communication, while other generations prefer to just be left to do their work. Again, I get it! I don't believe either party here was right or wrong, we are just different. Our new realtor -- who is younger -- relies heavily on social media, and promises more communication {phone, not text, so tone can't get misconstrued} so we feel more in the loop on what's being done to sell our home hundreds of miles from our current location.
So, I've put on my big girl pants -- and accepted the soured relationship, and am hoping for a better one moving forward. Understanding generational differences certainly put the whole saga into perspective!
Want to know more about managing and appreciating the generation gap? Check out Amy Shannon’s posts on LinkedIn, starting with this one: Leadership in a Multi-Generational Workplace.