Could 3D Printing Technology One Day Play a Role in the Restoration Industry?

Think ahead to five, 10, maybe even 15 years from now: How different will things be from what they are today? 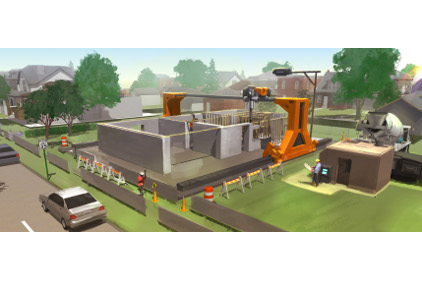 The restoration industry is always changing and it goes without saying that it’s important to stay on top of all the industry changes in order to position your business to be as successful as possible.

But, just for a minute, think ahead to five, 10, maybe even 15 years from now: How different will things be from what they are today? As you ponder that, I’d like to introduce you to Contour Crafting, a giant 3D printer that’s currently being tested now at the University of Southern California.

For those of you who are unfamiliar with 3D printing, it’s an additive fabrication process that is actually able to build real-life objects from the ground up, layer by layer. 3D printing is a technology best utilized to rapid prototype parts so they can be tested for form, fit and function before they are green-lit for production. Prior to joining R&R in January of 2012, I actually covered 3D printing (also known as “additive manufacturing”) quite extensively for the product development magazine that I worked for and saw as the development of these machines became faster, smaller and cheaper.

So what’s so unique about the Contour Crafting 3D printing technology? For starters, it’s a large scale machine – and it’s able to build a 2,500 square foot house in just 24 hours. Considering that even small figurines can take several hours to fabricate in a typical desktop 3D printer, that’s fast.

Secondly, it builds walls that test at 10,000 PSI strength. Considering that the average home’s wall tests at 3,000 PSI, the speed and quality end product that the machine fabricates could play a big role in the future of the construction industry.

Could a machine like this serve a role in the restoration industry? If you ask several of your peers, at least according to social media, the answer is “yes.”

A technology such as this could be used for reconstruction purposes, namely. I suppose it could also be used to build testing and training areas for professionals to train in. It could also be utilized in disaster relief areas.

So what do you think? Do you see a technology like this playing a role in restoration work down the road?

For more information about the technology, visit contourcrafting.org.