National nonresidential construction spending fell 0.7% in December 2021, according to an Associated Builders and Contractors analysis of data published today by the U.S. Census Bureau. On a seasonally adjusted annualized basis, nonresidential spending totaled $820.7 billion for the month.

“Much of the increase in nonresidential construction spending is attributable to inflationary pressures, not actual increases in physical output,” said ABC Chief Economist Anirban Basu. “The fact that nonresidential spending was down in December despite rising labor costs and elevated materials prices does not bode well for near-term profitability.

“A few segments continue to create a disproportionate share of contractor opportunities,” said Basu. “Among those are the commercial segment, which includes construction of fulfillment centers and manufacturing, a segment in which construction spending has expanded more than 30% during the past year. Residential construction also continues to be a hot spot in an environment characterized by scant inventory of unsold homes and rapidly rising rents, and the strength of multifamily construction is arguably one of the most surprising aspects of the economic recovery. Overall, contractors remain confident about the next six months, according to ABC’s Construction Confidence Index.

“Public construction was responsible for much of the weakness in December,” said Basu. “The expectation among many is that, as infrastructure monies begin to flow, the second half of the year will be better than the first. It is possible that infrastructure dollars will not begin to forcefully affect the marketplace until 2023. Time will tell.” 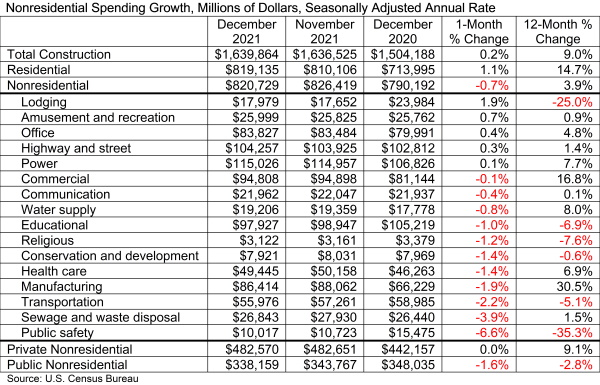