In mid-April of 2021, Metro Detroit saw three days of solid rain. The roof of a new hotel project was in place, and thought to be water tight, but was unable to stand against the volume of water being dumped on it.

The result: a hotel in mid-construction with water damage from top to bottom, affecting all 158 rooms. Ninety-percent of the water was hidden. This is where the story gets interesting. This hotel was built off site, in pods, and shipped to Michigan to be assembled on site. Think of a life-sized LEGO project. Now, imagine all the tiny crevices between LEGO bricks. As you will see in the images throughout this article, the LEGO analogy is really just the tip of the iceberg. This is the future of construction, which will present structural drying challenges for restorers.

The rain happened between April 9 and 11. On Monday, April 12, the project managers overseeing the hotel construction project arrived to work and reported finding water in about six places. 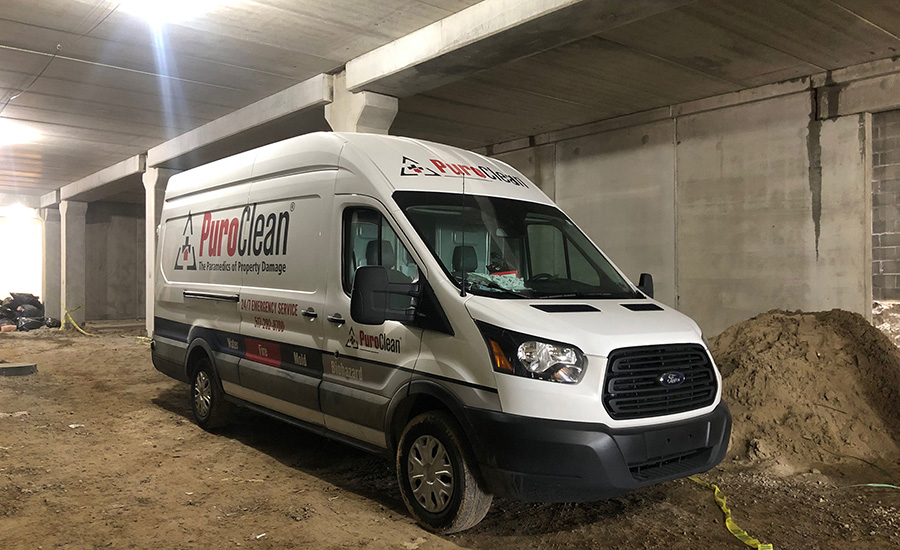 The roofers were on site between April 13 and 16 trying to solve any problems. On April 19, upon doing more tests, more water was found throughout the structure. Two days later, the PuroClean franchise handling the loss called in a trusted partner and advisor, Joe Ledbetter, owner of DISASTERCO, as a consultant to fully assess the extent of the damage and create a scope of work.

With the inspection completed on April 22, Ledbetter determined work needed to begin immediately. However, it still took three days of moving things around on the property due to it being an active construction site before restoration crews could get to work.

By April 26, the team had created a full scope of work. On April 28, equipment was placed and the drying process began. The photos you see with this article were taken when I was invited to do a walk-through on Monday, May 10. 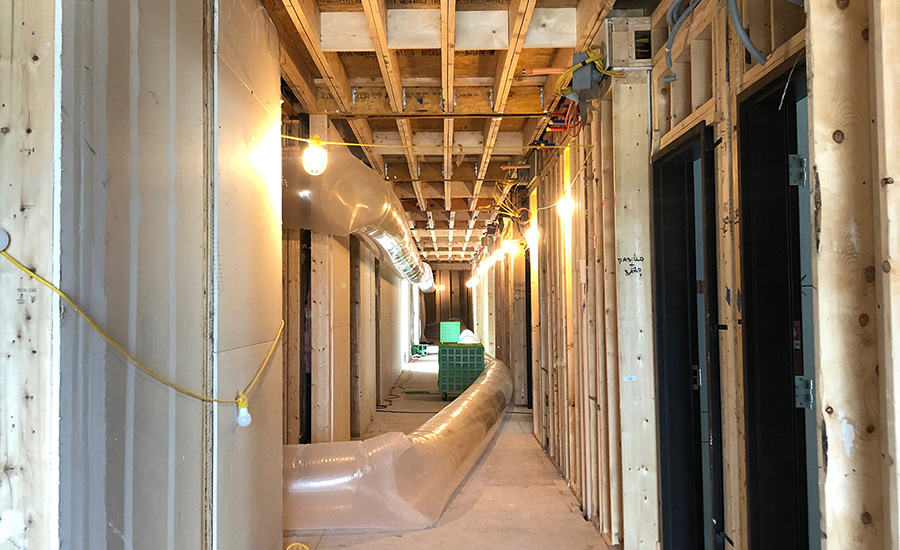 Before we can talk about the drying process itself, let’s explore this construction technique a bit more. The hotel was manufactured by Champion Commercial Structures, which specializes in modular construction. Champion’s tagline for modular builds is: Faster builds. Greater margins. Higher profits.

According to Champion’s website, “modular construction uses the same quality materials as traditional site-built structures, but considering that up to 70% of the structure is built and inspected off-site, the amount of time required for on-site construction is dramatically reduced.” Champion also notes less construction on-site reduces chances of weather delays, material change, and costly change orders.

A look at their website shows all the different ways modular construction is being used today: student housing and dorms, apartments, hotels, resorts, and more.

“For the construction method, there are actually a lot of efficiencies,” Ledbetter explained. “But due to the complexity, we are now challenged as restorers to understand this construction method so we can address the property correctly.”

At the time of the loss, there was not sheetrock or insulation in the hallways yet, which did provide Ledbetter and the PuroClean team clearer look at the inner workings of the building. The insulation that was in the walls did have an antimicrobial baked into it during the manufacturing process.

At the time of the loss, the rooms were all complete with fixtures and wallpaper. Furniture was set to be delivered in two weeks. 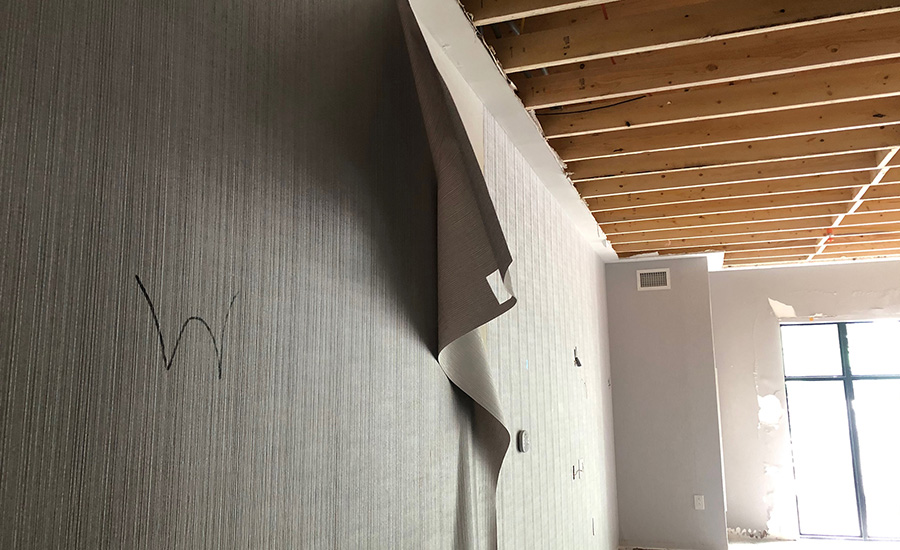 The hotel itself occupies floors three through eight of the building; the first two floors are a parking structure. Between the second and third floors is a crawl space, about 1.5 feet high. Temporary heat was put in on the third floor based on atmospheric conditions (also known as spring in Michigan). Desiccant dehumidification was also put into place immediately.

On day one, Ledbetter’s team did a full Matterport scan of the structure. Four technicians were tasked with monitoring 1,200 moisture points on a daily basis. Every single reading was photographed, numbered, and labeled. Ledbetter knew from day one it would be critical to do due diligence on documentation to support the complexity of the loss when working with the carrier to get the loss covered. Just a few days into the drying process, more than 70,000 photos had already been taken. Each was labeled and geo-stamped to the location.

Ken Larsen, a Registered Third Party Evaluator, was also brought in to do a full categorization of the loss. This resulted in a 42-page report at the start of the mitigation process. He also returned to fully assess the loss after mitigation was complete, before the repairs process began.

It took 17 days to dry the structure from start to finish, and the total mitigation bill was north of $1 million. At the time of writing this article, Ledbetter anticipated the put-back would take about two months, and that bill to also be around $1 million.

It is no surprise, based on what you’ve learned so far, that this job presented a number of unique challenges.

There were some obvious ones we’ve already mentioned: the building technique, the fact that mitigation didn’t start until more than 10 days after the loss, and the amount of construction equipment that had to be cleared from the site in order to bring in the needed drying equipment. 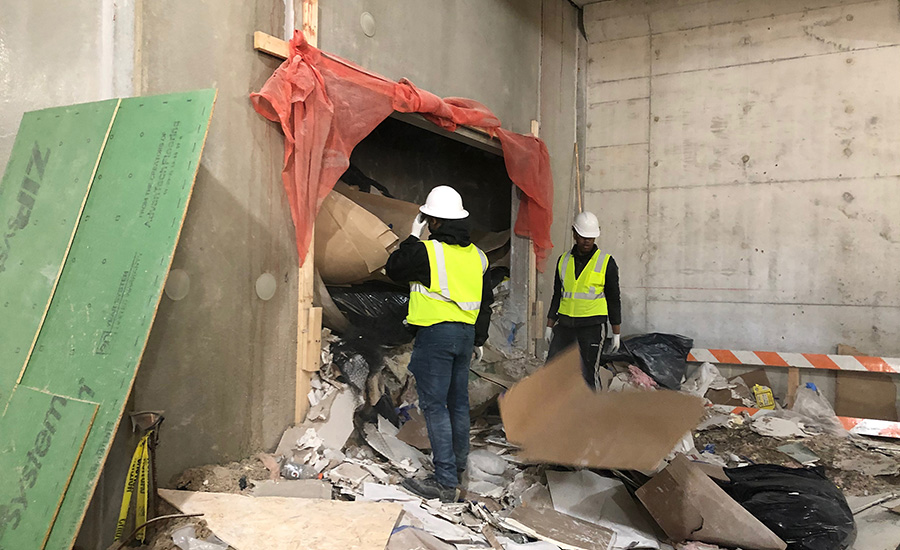 Plus, there were only two stairways in the entire building and no working elevator. One stairwell was being used for the desiccant, leaving the other for the team and all the equipment. To get creative, the elevator shaft was used for trash disposal because, for safety reasons, the open stairwell could not be used for removing trash and debris.

Remember the daily moisture readings? Ledbetter said on day five of the mitigation process, surfaces that were deemed dry based on readings at the start of the project were now reading 100% saturation.

“That happened because all the moisture that traveled down the middle of every room migrated into those walls, and as we created a better vapor differential through our desiccants, we then brought that moisture from deep inside those cavities right up to the leading edge of the wall,” Ledbetter said.

This is an important point to note in this case study. Had basic drying methodology been used in this loss, contractors may have assumed the structure was dry, based on moisture readings, within four days. However, because of the extensive investigative work and testing done by the mitigation team at this loss, they understood there was hidden moisture everywhere and did everything they could to find it, and dry it, or remove it.

It was key to have a methodical drying process as a team. This meant going room to room and finding similarities or differences – right down to whether baseboards were glued or nailed. Little things like that helped the team understand which factory that pod came from, and offered clues of its internal structure.

Microbial growth meant some of the sandwiched materials had to be removed, and demo required in some areas. Ledbetter and his team understand, from training, that even if walls register as dry on a moisture meter, if there was sandwiched materials, those are wet and need to be dried. He was able to get carrier support on this.

As with many commercial restoration projects, speediness was also critical. The owner of the hotel is contractually bound to open by a certain date, and the drying and repair process certainly set things back a bit. Despite not being set to open until the end of 2021, at the time of the loss, the hotel already had more than 350 events reserved for the space. 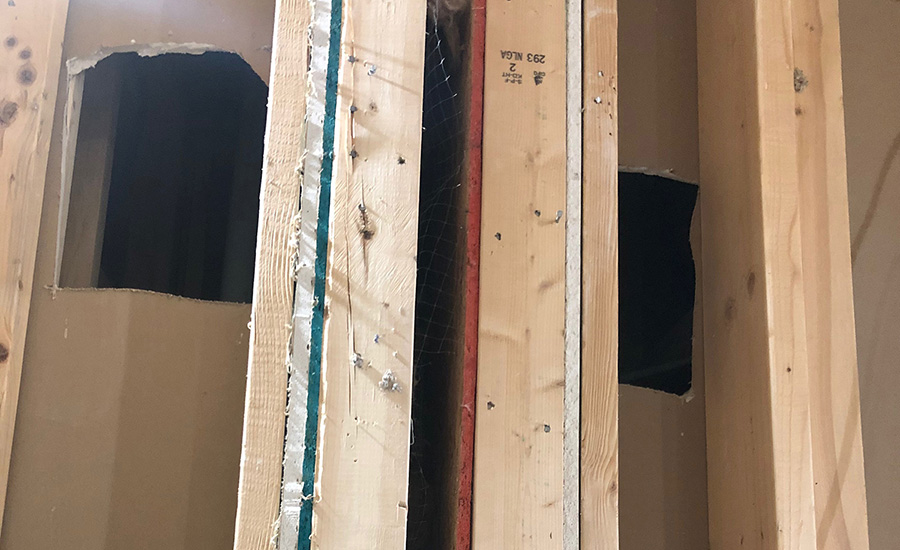 As discussed earlier about the makeup of the structure itself, areas where there was sandwiched drywall or insulation had to be encapsulated to get it dry. Same applied to framing. The team took every step necessary to get the structure dry, remove any microbial growth, and prevent future microbial growth.

On the repairs phase, the building had an improved fire-stop rating which had to be removed for the drying process. Ledbetter said finding a way to recreate that fire stop in an existing, tight space was “going to be like putting a piece of cheese in an already-made sandwich.”

Drywall removal was very methodical, and done on an as-needed basis, instead of a blanket decision across the building, which saved a great deal of time and money during the repairs process.


The Future of Construction

Ledbetter and Larsen are passionate about the importance of restorers understanding the future of construction. This modular building technique originated in Europe, and is growing in popularity in the U.S.

Ledbetter predicts in the next 15 years, modular structures just like this will be all the industry is drying.

“This is where our industry needs to continuously be looking at the newest building methods, to be constantly asking questions outside the box,” Ledbetter said. “This is the future of building. The cost savings for the construction company are so exponential, they will never build a traditional building again.”