Does Cleaning Mold From Carpet Work?

There is considerable confusion in the minds of restoration professionals regarding the proper approach to carpets that are part of a water loss where visible fungal growth is present. While it is the practice of many organizations to clean carpets subjected to Category 3 water loss, despite the potential for sickness from biological contamination in the water that is extracted prior to cleaning, there is greater hesitation in addressing wet carpet with visible colonies of fungus. Part of this hesitation lies in the nagging concern that standard cleaning protocols for carpets may not be removing all the fungal organisms. Unless the mold is properly removed, the restoration contractor is failing in their duty to return the structure to a pre-loss condition.

In the fall of 2018, an opportunity to evaluate the effectiveness of carpet cleaning procedures and chemistry for fungal contamination situations became available to Wonder Makers Environmental. One of our clients had a good-sized office building (approximately 14,000 square feet) that was dormant as they awaited a new tenant. The maintenance staff checked the building on a monthly basis to make sure no problems arose and were surprised in September when they entered and were immediately assaulted with a dank, musty odor. Moving from the tiled vestibule to the main part of the structure revealed the source of the odor: fungal growth on the carpet in virtually every part of the building.

Since mold contamination is the symptom, the maintenance crew began looking for the cause; some source of water intrusion or high humidity. Soon, they were walking on squishy carpet and following the water trail back to a water heater closet. Although the review schedule confirmed the leak was less than 30 days old, conditions in the building suggested the water heater had been malfunctioning for weeks. 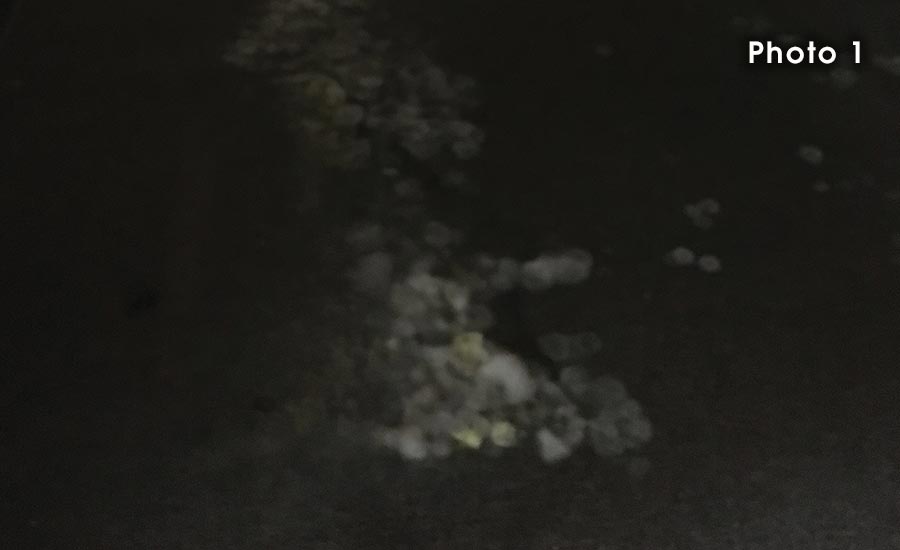 Images one through five provide some representative images of the condition of the building with one of the most obvious signs that water had been coming out of the heater for quite some time: the presence of mushrooms growing from the carpet. The main lobby shown in figures one and two had the most fungal colonies as well as the colonies that were largest in size. Many of the fungal colonies on the carpet throughout the building showed various colors, but laboratory analysis indicated they were primarily Aspergillus/Penicillium-like molds.

After conducting a general survey of the structure and shutting off the source to the water heater, the decision was made to have a professional assessment of the situation conducted. In addition to a visual review, both representative air and surface samples were collected in order to form the basis for a scope of work. 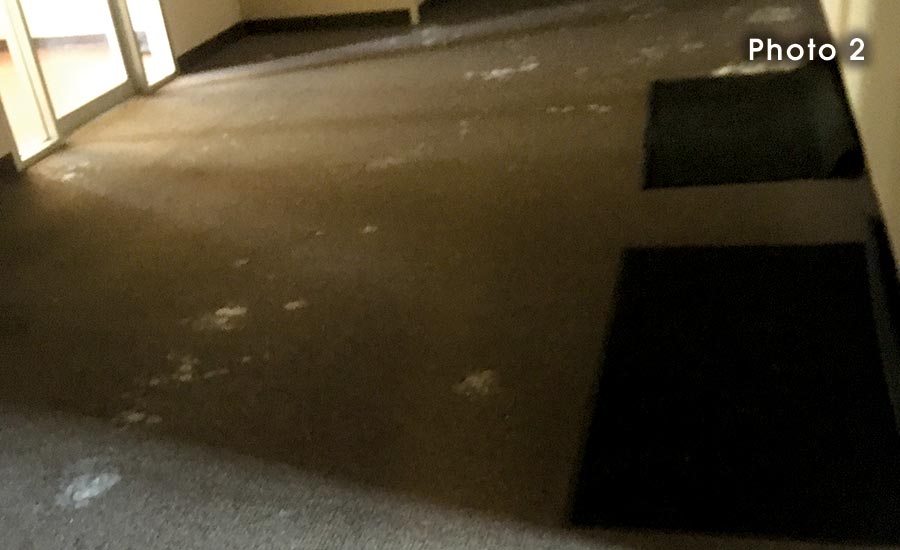 At first glance, the results of the spore trap air samples were not that “bad”. The indoor fungal levels were all lower than the comparison outdoor sample. However, a deeper review told the real story. The high outdoor spore level was typical for the location and the season with nearly 90 percent of the recovered mold spores identified as ascospores, basidiospores, and Cladosporium. The mold most prevalent on the carpet, Aspergillius/Penicillium-like spores, accounted for less than 5 percent of the outside spore load. In contrast, the percentage of Aspergillius/Penicillium-like spores found on the interior sample ranged from 10 to 51 percent of the total. These high percentages in the air samples were an obvious reflection of the presence of those types of molds on the floor.

The extent of mold on the carpet resulted in the laboratory classifying the contamination as “Category 5”, their most serious rating. The analysis sheet also noted that the floor sample, which was collected with a Bio-Tape, contained fungal material estimated at an astounding 90-99 percent of the sample constituents. It further indicated that 50 percent of the fungal materials were spores of Aspergillius/Penicillium-like molds and the other 50 percent were hyphal material. Overall, a very high level of spore producing structures was observed. 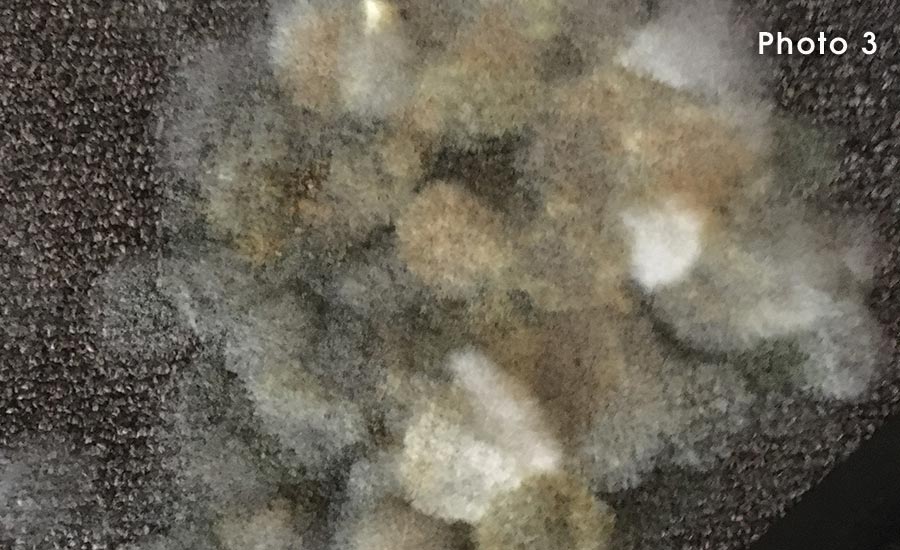 The good news in the situation was the fact that the carpet is a commercial grade with no natural fibers glued directly to the concrete slab. The small area of carpet around the water heater that was soaked and supporting mushroom growth was slated to be removed as part of the mold remediation of the mechanical closet. But, that amounted to only 500 square feet, with the rest of the carpet supporting mold growth due to elevated levels of humidity in the building.

All of this data led to the decision to clean the majority of the carpet rather than remove it. Nevertheless, the cleaning had to be conducted as a mold remediation project to guarantee the safety of the remediation crew and to ensure the carpet was returned to a “pre-loss condition”. Given that approach, the well-respected mold remediation method of “HEPA sandwich” cleaning was adopted into the project work procedures (HEPA sandwich refers to a three-step cleaning process with wet cleaning “sandwiched” between two thorough cleanings with a HEPA-filtered vacuum). 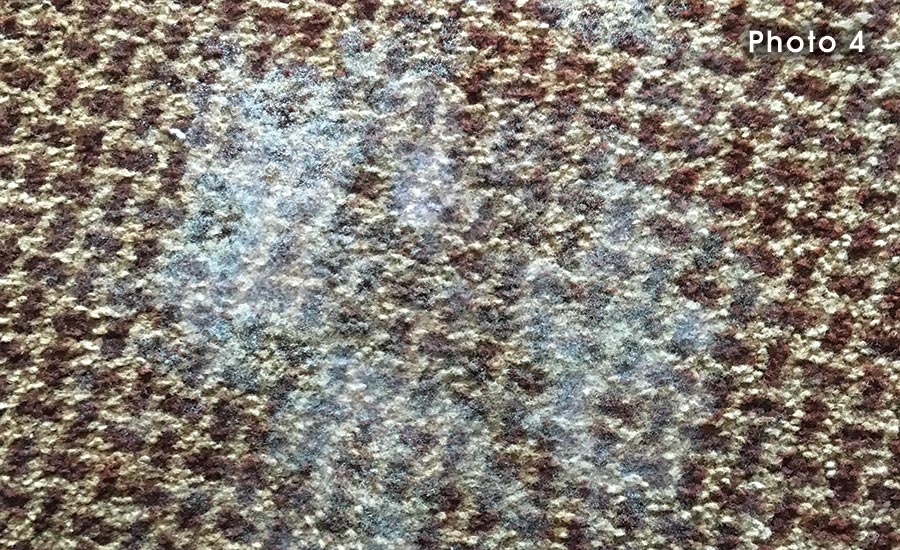 The work procedures indicated that the initial HEPA vacuuming of the carpet should be conducted by individuals trained in mold remediation procedures and with the individuals utilizing appropriate personal protective equipment.  Protective body covering, gloves, and respiratory protection with an N-100 filtering face piece were laid out as the minimum safety gear. The carpet cleaning also involved the removal of all unnecessary materials from the areas to be cleaned; especially the debris in some of the offices and hallways.

Since HEPA vacuuming with overlapping strokes of the vacuum floor tool was designated as the initial response to the mold, the work procedures were adamant that no beater bar or other attachments that create substantial agitation would be used. Following the initial vacuuming, hot water extraction of the previously vacuumed carpet using an EPA-registered antimicrobial specifically designed for carpet cleaning was required. Use of a truck mount system was strongly recommended in order to apply hotter water and greater extraction suction to the carpet than what is normally provided by portable units. 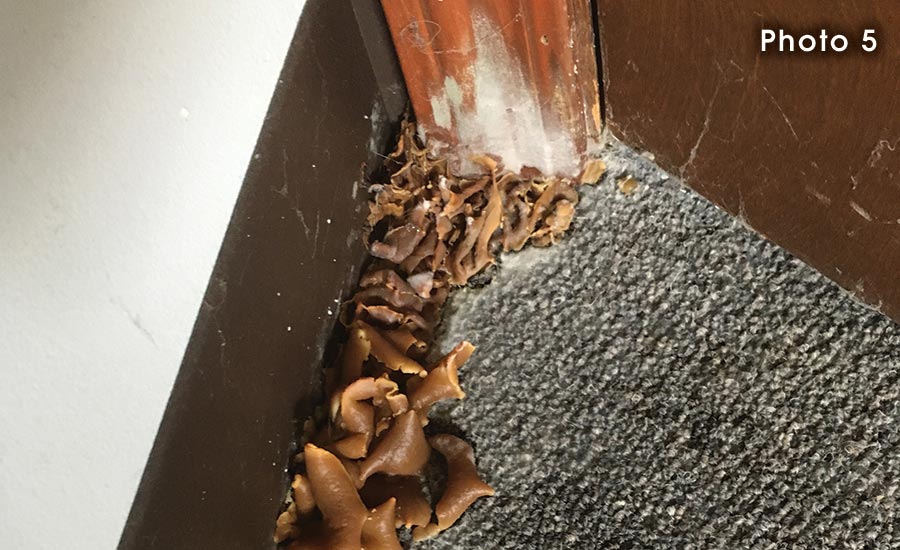 The third piece of the sandwich involved quick drying of the cleaned carpets through the use of dehumidifiers, HEPA filtered negative air machines set up to run as air scrubbers, and floor fans. A second HEPA vacuuming of the carpets once they were confirmed to be dry was also conducted. 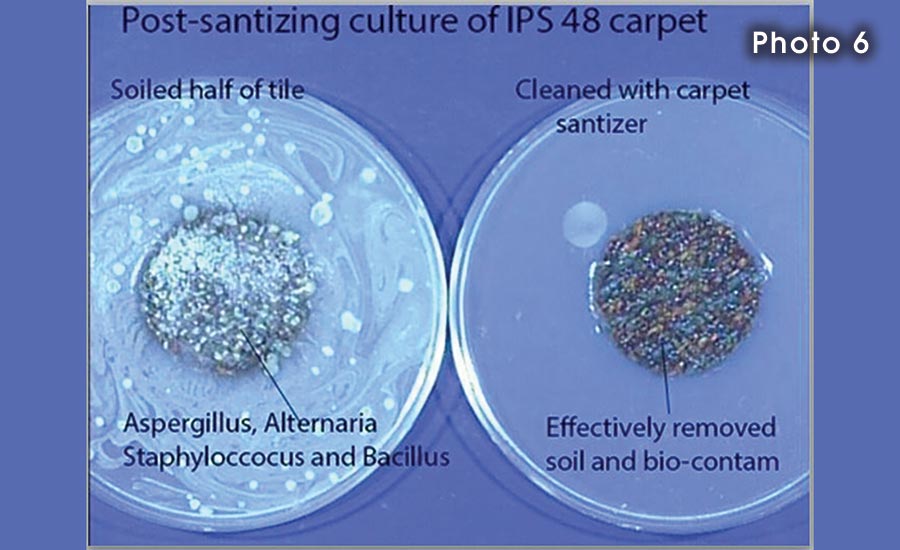 Finding an EPA-registered antimicrobial specifically designed for carpet cleaning that would work effectively on mold was tricky. After reviewing a presentation by three professors at Georgia State University entitled “Cleaning-Sanitizing of Carpet Tile: Protocol Development and Health Perspectives”, a decision was made to utilize a two-part cleaner called Bio-Oxygen Carpet Cleaner manufactured by Artemis Bio-Solutions Inc.* Figure 6 shows the results from one of the tests conducted using that product which indicates no microbial growth occurred following the cleaning.

The building owner turned execution of the work procedures over to a local SERVPRO franchise. Figure 7 shows the key step in the middle of the HEPA sandwich underway. Note the HEPA air scrubber operating in place to both collect airborne spores that may have been liberated by the hot water extraction and to provide a source of air movement to accelerate the drying of the carpet. 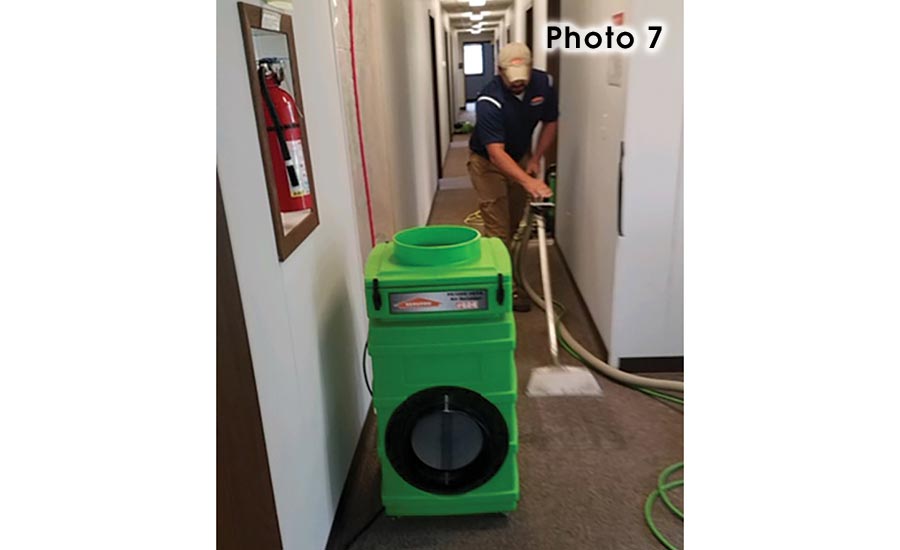 Once the carpet cleaning was finished, the cleaned areas were subjected to a detailed visual inspection. Seven of the eight areas were exceptionally clean and sampling of those sections of the building was done. One of the areas failed the visual review, but not because of the cleaning protocol. The workers conducting the remediation in the negative pressure enclosure used an inside hallway for access; their foot traffic on the newly cleaned carpet forced a re-cleaning of that section of the building. 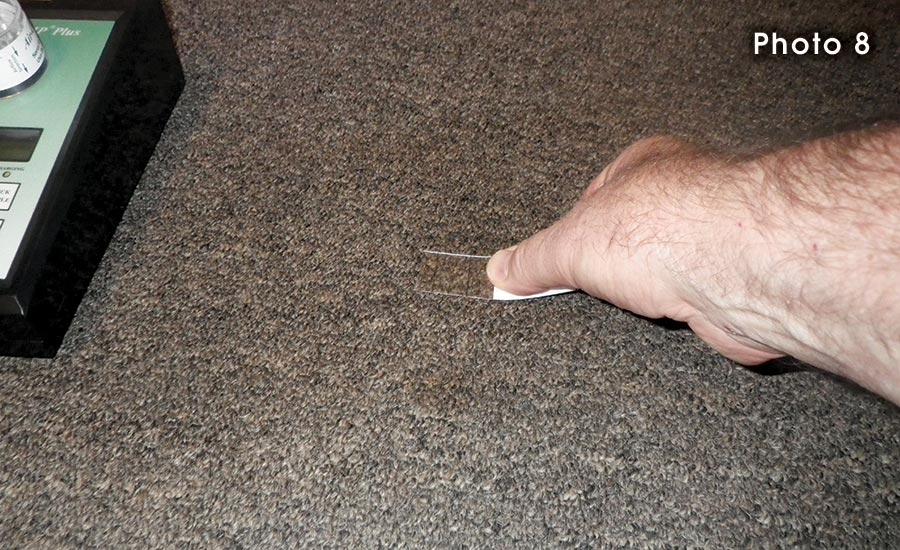 Figures 8 and 9 are photos of the post remediation sampling. Once again both spore trap air samples and Bio-Tape surface sample were collected following the visual inspection. The spore trap samples were taken at floor level rather than the normal breathing zone height in order to create a worst case scenario in regards to the carpet cleaning. In the main lobby, the area most heavily impacted with carpet mold, the air sample results went from 6,028 spores per cubic meter of air (s/m3) with 5,500 0f those being Aspergillius/Penicillium-like spores to 48 total s/m3 with zero Aspergillius/Penicillium-like spores. The surface sample results were equally as impressive. 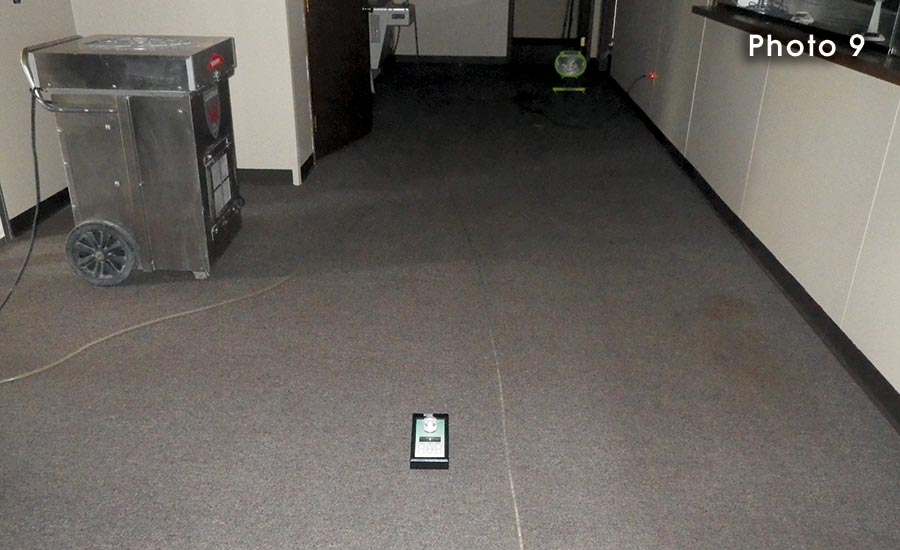 While this is only a single case study, the approach taken and the information collected should serve as a clear indication that mold contaminated carpets can be successfully cleaned. The key lessons of using personal protective equipment for workers involved in the initial HEPA vacuuming, treating the work as a mold remediation project, and choosing the equipment and chemicals that have a documented history of success in eradicating fungal contamination are ones that can benefit the entire industry.

*Artemis Bio-Solutions Inc provided the carpet cleaning concentrate for use in the truck mount hot water extractor for the project. For additional information on their product they can be reached at 630-359-4090 or www.artemisbiosolutions.com

Michael A. Pinto is chief executive officer of Wonder Makers Environmental, Inc., a manufacturing and environmental consulting firm that specializes in identification and control of asbestos, lead, IAQ, mold, industrial hygiene, and chemical problems. Mr. Pinto is the author of over 230 published articles and several books including, Fungal Contamination: A Comprehensive Guide for Remediation and Forensic Restoration: Procedures to Protect Operators and Occupants.

He completed doctoral course work in environmental engineering and holds numerous certifications in the environmental and safety areas, including Certified Safety Professional, Certified Mold Professional, and Certified Forensic Operator. In addition to being a frequent speaker at industry events, Michael has been honored with such prestigious awards as the Golden Quill, Martin L. King Award, and the Phoenix Award for Innovative Restoration from the Restoration Industry Association. He serves as an Emeritus member on the board of the Environmental Information Association (EIA) and on the President’s Council of the National Organization of Remediators and Microbial Inspectors (NORMI).

For over 40 years Michael Pinto has provided professional safety and industrial hygiene services related to a wide variety of indoor contaminants. He can be reached at map@wondermakers.com or (269) 382-4154.
You must login or register in order to post a comment.