ProTeam® National Channel Manager Jeff Stone was recently presented with the Go Getter Award by the National Service Alliance. This award recognized ProTeam, the company that created the original and Next Generation backpack vacuums, as the NSA Supply Partner that had the biggest impact and largest growth for the NSA membership in the previous year. 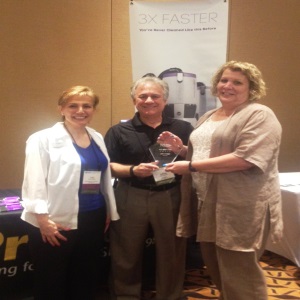 NSA Executive Director Terry Sambrowski and NSA Director of Member Services Tobi Colbert presented the award to Stone at the 2015 BSCAI Executive Management Conference in Scottsdale, Ariz.
“Our program with ProTeam is just into its third year,” said Sambrowski. “Jeff grew our member participation from 30 percent in the first year to 70 percent in the second year.  This is highly unusual with our group as they are slow to change and adopt new programs.  It was not only the product, but also Jeff’s work in making members aware of the program that made it so successful.”
Headquartered in Charlotte, N.C., NSA is the industry-leading group-purchasing organization for independently owned building service contractors and related businesses in the United States. Collectively, NSA members represent over $1.7B in revenues.
KEYWORDS: restoration industry events