Each year, one standout female franchise owner is awarded the designation of Woman of the Year by consistently setting an example for other franchisees 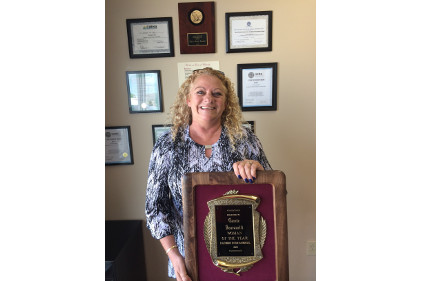 “Anytime you get an award like this it is an honor,” said Carrie Scaravelli. “By working hard in a male-dominated society and providing outstanding customer service you can go a long way, and it shows that this field is not just for males.”

Each year, one standout female franchise owner is awarded the designation of Woman of the Year by consistently setting an example for other franchisees through continuous efforts to strengthen and support her franchise.

“She deserves this award,” said Michael Scaravelli, owner of Rainbow International of Cleveland, who nominated her for the honor. “She is very committed to the company, and always brings out the best in people. She is a true leader and will continue to do great things.”

Adds Mark Welstead, Rainbow International President: “Carrie is a strong leader who really who cares about people, the business, her team members and is deserving of recognition. Women like her are opening the doors for future women to join the trade. We need to celebrate those who are leaders in their field.”