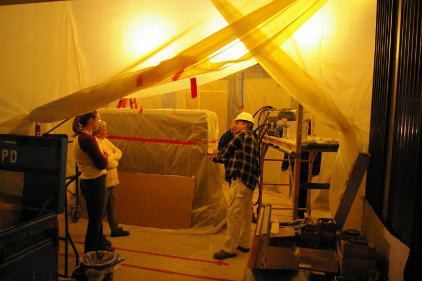 We posted a news item a few weeks ago that detailed how Abraham Lincoln’s tomb is undergoing an extensive four-month, $700,000 restoration project. The news item got a good reaction from a lot of you, so we decided to investigate a little further into the details of the project, which is expected to finish soon at Oak Ridge Cemetery in Springfield, Illinois. So here’s a closer look at the restoration project involving the 16th President’s final resting place:

The Lincoln Tomb is the final resting place of President Abraham Lincoln, having been dedicated in 1874. Today, the tomb is a National Historic Landmark and tourist attraction, as about 350,000 people visit the site each year. Since its dedication in 1874, the tomb has undergone two major reconstructions, one which dug the foundations deeper and the other which expanded the obelisk and added statuary plaques and marble to the site, according to Candy Knox, site administrator.

However, water damage has long been a problem at the site, thanks in part to the tomb’s flat roof. This has led to damaged portions of the tomb ceiling and the decorative plaster trim. The water leaks haven’t been an issue for a few years, thanks to the installation of a membrane installed on top of the tomb, but there were still many repairs that were necessary.

“The early construction contained interior rain leaders that drained the tomb’s upper and lower decks,” says Knox. “The connections and routing failed soon after completion and were soon abandoned in place. In addition, the flashing assemblies and details constructed as part of the stone balustrade assemblies that surround the decks had been subject to modifications via repairs that weakened the assembly material integrity and performance over time.”

So in order to make all the necessary repairs – as well as prepare the tomb for the 150th anniversary of the President’s death in the spring of 2015 – the site was shut down on December 1, 2013 for restoration work.

To date, workers have repaired plaster molding, installed a new palladium leaf in the rotunda, golf leaf in the burial chamber and repaired interior ceilings.

“The restoration techniques incorporated throughout the project are couched in maintaining as much of the original finishes fabric and materials as possible with the least amount of disturbance,” says Knox.

The project is expected to be completed by April 1.