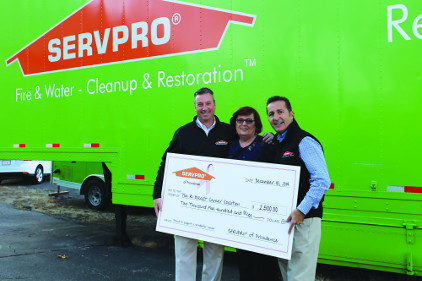 SERVPRO of Providence recently presented a check of $2,500 to the Rhode Island Breast Cancer Coalition as part of a social media campaign during October’s “Breast Cancer Awareness Month,” according to a press release.

For every “like” it received to its Facebook page in October, the SERVPRO location donated $5 to the Coalition. The campaign finished with 148 new likes, totaling a donation of $740, however, Frank Mattos, owner, in conjunction with general manager, Chris Gagnon, chose to raise the donation to $2,500 to show their genuine support for the cause.